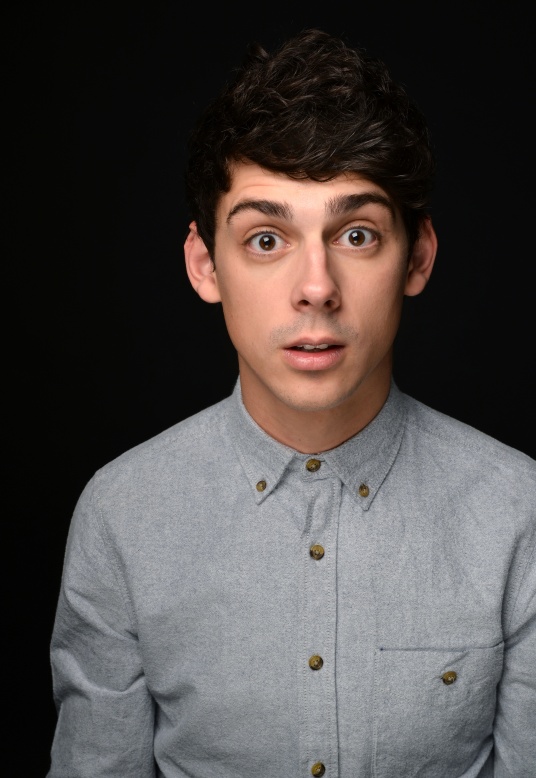 At the tender age of just 23-years-old, Matt Richardson has carved himself a phenomenal career in comedy. His success on stage, led to an offer to co-host the Xtra Factor and he found himself becoming a household name overnight. He has achieved so much for someone so young and I was keen to find out more about the man who can bring a smile to anyone’s face.

Matt accepted my FaceTime call and his youthful face filled my screen. He was sat on the floor of his bedroom, dressed casually in a t-shirt, with one hand holding his phone and the other lost in his signature mass of dark curly hair.

Matt told me that he had had a pretty relaxed morning, which consisted of watching Skyfall in nothing but his pants. To prove his point, he swivelled his phone towards his nether regions and flashed me the top of his naked thigh. I fell about laughing and mock-scolded him for his unprofessionalism. He responded with a shrug of the shoulders and his soft brown eyes twinkled mischievously.

This of course led to a heated debate about the best James Bond in history. I swore by Pierce Brosnan, Matt responded with a raised eyebrow and declared his love for Daniel Craig.

We quickly fell into easy banter and I looked at him in mock horror as he confessed that he was not a fan of my beloved Game of Thrones. Suddenly, he threw his head back and laughed long and hard.

He furrowed his dark eyebrows and said: “I fucking hate Game of Thrones out of principle. I went to a show at London Collections: Men and sat next to this guy. I asked him what he does for a living and he looked at me like I had shat in his hands! Apparently he was in Game of Thrones but who fucking cares? Not everyone watches that show.”

The entertainment industry is shockingly small yet I was still surprised to learn that Matt knew two of my most recent interviewees; television presenter Darren Kennedy and YouTube star Jim Chapman.

A small smile played on Matt’s lips, he joked: “We all know each other. This must be the most interbred industry. We’re all social whores, desperately climbing the ladder of fame.”

This month marks five years since Matt’s first ever stand-up gig. He was 18-years-old and studying at Oxford Brookes University when the opportunity to partake in a comedy show arose.

The corners of his mouth were turned up ever so slightly into a small smile. He added nostalgically: “The gig was amazing. Well, for me it was anyway. For the audience it was probably bloody awful. I talked about how shit the university was and how it looked like a Nazi concentration camp.” 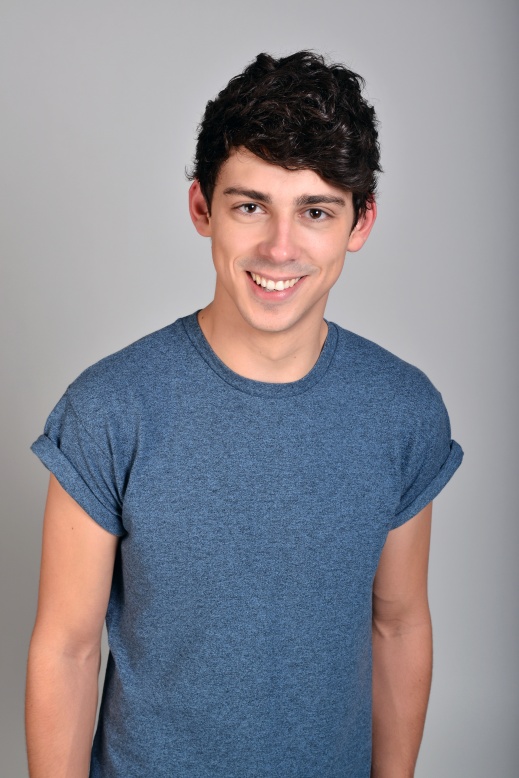 Stand up comedy has a reputation for being one of the hardest and most frightening jobs in the world, however Matt vehemently disagrees with this notion.

He said: “It’s the public speaking that people hate and that is not even the hardest part. Being on stage is the easiest part of the job, the writing is harder, so is the driving by yourself for five hours to a gig, then back again. Those are the aspects of the job that I struggle with the most.”

Matt believes that it is fundamental for a comedian to know his audience. He elaborated: “You have to know what works and what doesn’t in certain rooms. London is always tough. In London there are literally twelve other things the audience could be doing on that very street on that very night, so there is a pressure to be really good. In London, they look at you like ‘come on then, hurry up and make me laugh’.”

When Matt performs his comedy, he has the audience eating out of his hands with his witty anecdotes. I was keen to discover whether Matt had a favourite joke from his repertoire.

He thought for a moment, biting his lip gently as he did so. Then suddenly a naughty grin illuminated his face, he said mischievously: “I warn you, it’s quite offensive. It goes, ‘I think it was really obvious that all these children’s TV presenters were paedophiles. I remember watching Blue Peter and the guy goes ‘here’s one I did earlier’, and it was just a crying seven-year-old.’”

Although Matt was warm, easy-going and hilarious, many comedians have a reputation as being somewhat self-absorbed and often surprisingly miserable.

The world of comedy has a dark underbelly; many comedians suffer from chronic loneliness, addiction and depression. As I broached this delicate subject to Matt, he nodded solemnly. He said frankly: “Comedy naturally attracts people from the fringes of society, so you get a disproportionate amount of depressives and addicts. It’s the kind of job that gives you an unmistakable high, it’s like a drug.”

He added: “The high you get after a good gig is like nothing else. I could probably do heroin and it wouldn’t quite match it.”

Depression is a topic that is close to Matt’s heart. The smile that had lit up his face had now faded away. His voice lowered considerably, he said: “There was a point in my life where I had depression. I spent a lot of time sitting in a car by myself with just my mind for company, that doesn’t cultivate healthy feelings. I think the travel and the lifestyle breaks more people than the pressure to be funny.”

Matt said thoughtfully: “Normal people need affection, a comic needs adulation. Comedy attracts people that want to be loved. Comics will drive from London to Aberdeen just to get a room full of people to like them. Even if you become really successful at it, that goal never goes away. You are just hoping that a lot more people will love you.”

Comedians are notorious for working unsociable hours and living a great portion of their lives on the road. This arrangement can be especially difficult for those around them and can have a devastating effect on relationships. Unfortunately this is something that Matt knows all too well.

He sighed and said: “At the moment, I have a really supportive girlfriend so I am lucky in that respect. However when you’re in a different town every night, that can really test relationships. I could completely accept someone breaking up with me because of my lifestyle.”

He added: “I’m too deep into it now too, I can’t quit and get a normal job. I don’t have any skills or a degree. More importantly, I’ve sacrificed so much of my life. I hate it sometimes, I have come close to quitting but my best day in any other job would never be as good as the worst day in this job.” 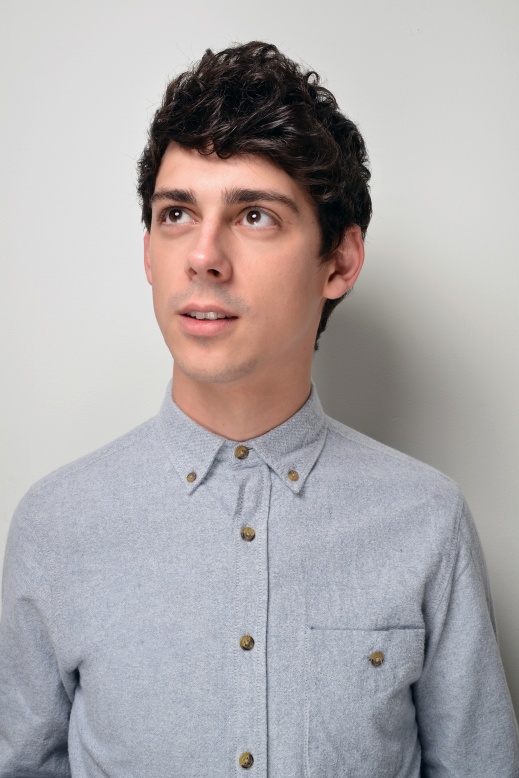 Matt had a stellar reputation as a rising star in comedy but then he received an email out of the blue from the Xtra Factor, which would raise his profile to stratospheric proportions.

He revealed: “It was so bizarre. I sat down for a meeting with them and they asked what I would bring to the show. I told them that I would say things that Caroline Flack would have to apologise for!”

Matt clearly made an impression in the meeting as he was invited for a screen test with Caroline. Matt had worked with Caroline on a pilot for the TV show Viral Tap and they already had great chemistry.

As he thought back to the screen test, an infectious laugh escaped his lips. He said: “It was hilarious! Caroline and I were just insulting each other in front of everyone. She said I looked like Steve Carell and I told her to go and fuck herself.”

Matt recalled the moment that he got the call that would change his life. He said nostalgically: “I was pestering Caroline for ages to see if she’d heard anything. She knew that I had the job but couldn’t tell me.”

Matt was overjoyed when he finally received the call. Although, he admitted: “I told them that I hadn’t done any telly before and it was their own funeral! They assured me that the job was mine if I wanted it and that they wanted to give me my start in telly. It was nice and very surreal.”

After the official announcement was made to the press, Matt found his face splashed over the front cover of magazines and newspapers around the country. He became a household name over night.

Matt’s stint on the Xtra Factor was an absolute whirlwind. As he described the perks of his job, he shook his head in disbelief as though he was talking about another life altogether. He said: “It was crazy. I travelled around the world first class and met some extraordinary people. My residing memory of it is that I laughed until I cried every single day.”

He added: “It was all so exciting and rock and roll! I even had a shit in Ozzy Osbourne’s toilet, that’s not an everyday occurrence! Not bad when a year before I was working in a lettings office.”

However, one of the most noticeable changes in his life was the reception he got from women. He smiled mischievously and said: “Before I was on telly, girls would say ‘we’ll get married when we are 30, if I haven’t found anyone already’, now they ask me to go back to their hotel rooms. I’m really not a man about town kind of guy, I find it hilarious.”

There are thousands of men and women who dream of following in Matt’s footsteps. I was keen to discover what advice he would offer to aspiring comedians.

He thought for a moment, then said: “Don’t be reluctant, it’s the most open access art form there is. With Stand-up you can be utterly penniless, have no contacts and you can make it to the top. It costs nothing to attend an open mike night.”

He added: “Comedy is the best thing in the world. Don’t be frightened, everyone has been rejected at some point, you just have to power through. Someone has got to make it, why can’t it be you?”

Matt had been an absolute joy to speak to. He was painfully witty, intelligent and adorably self-deprecating. He spoke from the heart, made my sides ache with laughter and every sentence had no filter.

As our conversation came to an end, Matt said suddenly: “This whole industry is ridiculous yet everyone takes it so seriously. What are we really doing but filling our self-indulgent dreams. I get paid to go on stage and talk about wanking to strangers, it is crazy!”

He added: “I’m basically blagging my way through and seeing what I can get away with. Comedy is not hard, being a nurse is hard. During my worst day at work, nobody dies, if you’re a nurse, people die. If I have a bad day at work, there is 20 minutes with no laughter, oh bloody well!”

Matt is one of the most exciting talents in comedy right now and it isn’t hard to see why. He is one of the most refreshingly honest and genuinely entertaining people I have come across. I have no doubt that if he continues to wear his heart on his sleeve, world domination is imminent.

Special thanks to Misty Dee Griffiths