A Tale of Two: Botswana 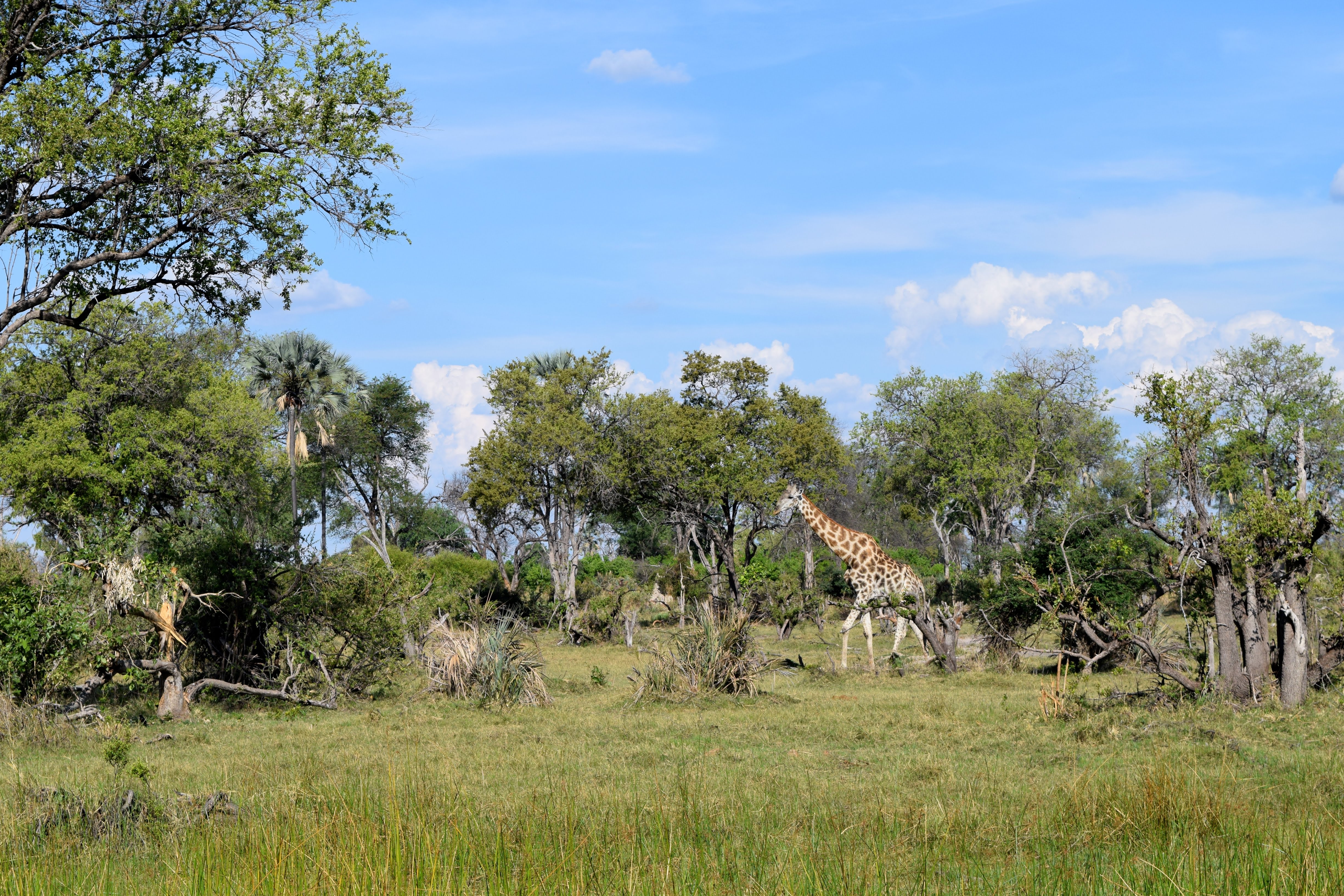 If there is an Eden on Earth, it is in Botswana. Without doubt the richest part of Southern Africa, this country the size of France is home to a third of all the elephants in Africa — some 130,000 at the last count — and is one of the last and safest refuges for rhinos in the wild. On a short drive through the Okavango Delta you are likely to see giraffes and impalas, zebras, ostriches, and lions: here, even the most fantastical scenes from The Lion King seem to come true.

But the watery wilderness of the Okavango is not the only habitat, nor attraction, of Botswana. The Kalahari Desert is no less impressive, and in addition to desert adapted wildlife, it’s also a natural adventure playground for active travellers.

Botswana’s safari lodges and camps are the most exclusive in Africa, often accommodating just a handful of guests in opulent surroundings. When Gomoti Plains Camp opened in 2017, it raised the bar in the Okavango Delta’s Moremi Game Reserve even higher: guests staying in the 10 tented suites all fly in by light aircraft to the private airstrip, and there’s no one else for miles.

Arriving at the camp, the way to my tent was blocked. A kudu antelope stood on the path, and had no intention of moving. She was far from the only creature to wander through; with no fences or other such restrictions, elephants, buffalos, and hyenas can come and go as they please.

Gomoti Plains is simply designed, evocative of an earlier era of African exploration. The guest suites and central building are all tented structures, their sides rolled up in the heat of the day to allow the breeze to blow through. Inside, classical and contemporary decor and furnishings meet, with handmade and vintage pieces combining to create the carefully curated atmosphere. Between game drives and walks, there’s time to swim in the idyllic outdoor pool, watching the giraffe pass by; to read in the library; and to treat oneself to a massage outside on the deck.

The guest tents look out over the Gomoti Channel, which attracts birds and animals to drink, fish, and bathe year round. The natural colours of the interior — grey-blue, dry grass yellow, and cream — blend perfectly with the surrounding trees and grasses, and compliment the polished wooden floors. There’s nothing more refreshing than cooling off beneath the water of the outdoor rain shower before slipping between the satin-finish sheets and drifting off to sleep with the noises of the bush all about you. 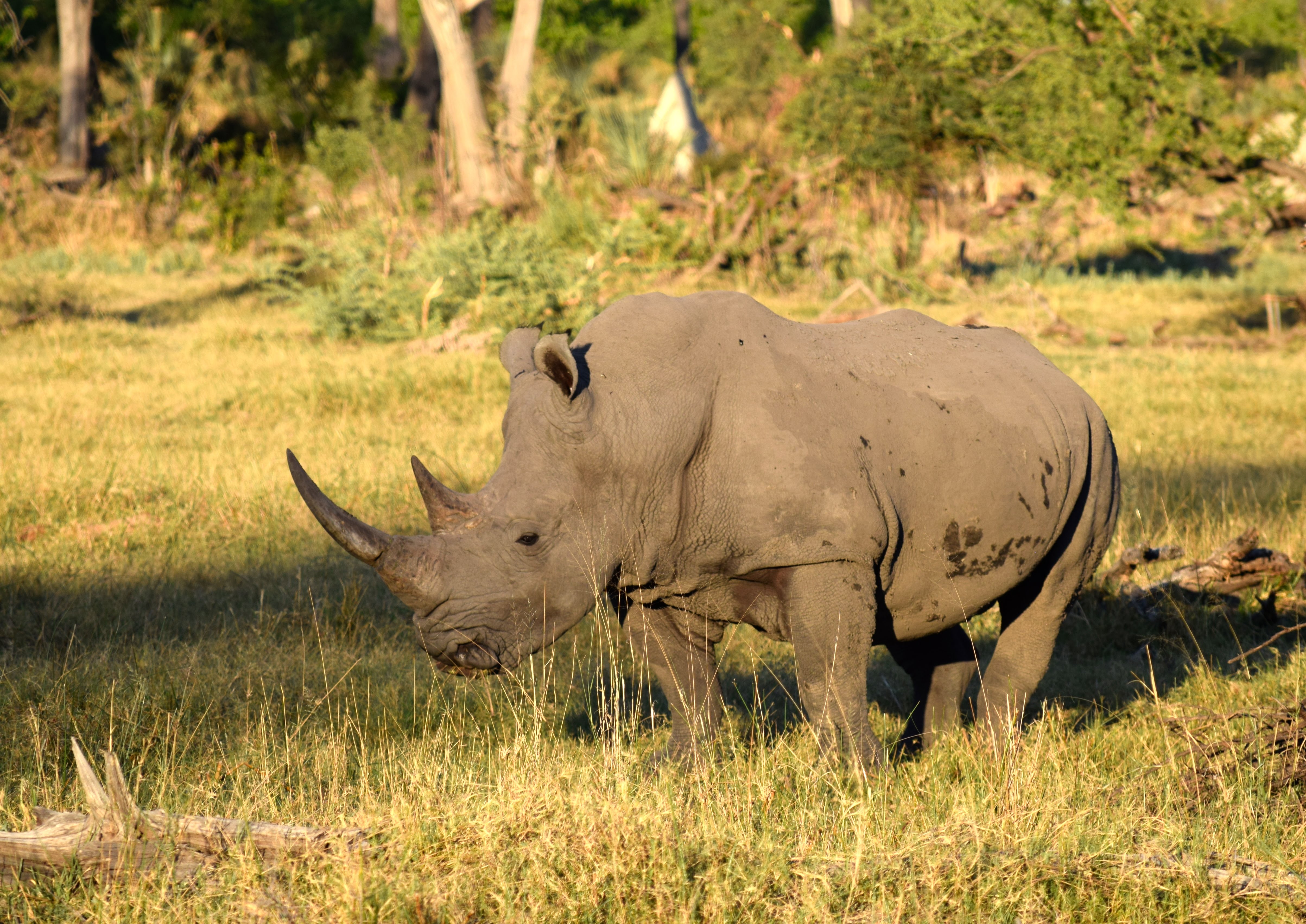 The rhino is the rarest of the Big Five mammals all first time safari goers aim to spot. But in Botswana, the population is relatively stable thanks to the vital work of Rhinos Without Borders. Some 33 rhinos were relocated to Gomoti Plains last summer, and you see a strong chance of seeing one on a game drive.

My rhino sighting caught me completely by surprise. Guide Mott and I drove out in pursuit of a lion (which we also saw), but rounded a clump of trees into open ground and there in front of us was a rhino. We drew close and cut the engine; the rhino carried on grazing. He simply didn’t care we were there. 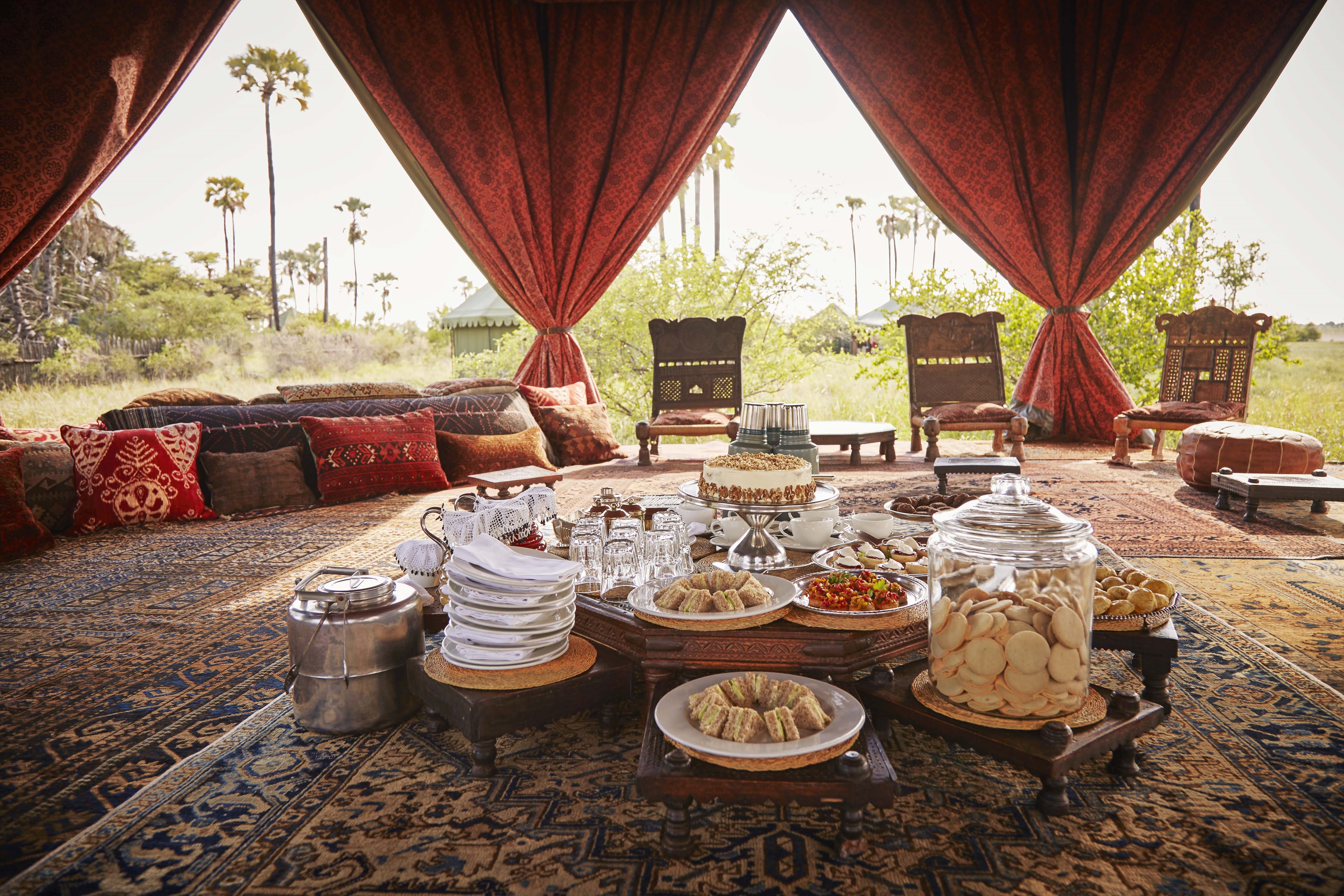 Jack’s Camp is a legend in Botswana and beyond. Since the 1960s when it was founded by explorer Jack Bousfield on the edge of the Makgadikgadi Pans — the largest salt flat in Africa — it’s built its name as the first and last word in luxury.

Accommodation at Jack’s Camp is in Bedouin style tents which owe as much to the royal tents of India’s maharajas as they do to Arabia. The four poster beds are adorned with rich fabrics, there are hand knotted silk Persian carpets upon the polished wooden floors, and antique lithographs and prints decorate the walls. Stepping into the en suite bathrooms, you will quite literally sit upon a wooden throne, and the experience of sinking into a copper bathtub filled almost to the brim with hot water is sublime.

The shared areas are no less extraordinary; have you ever swum inside a tent? Here at Jack’s Camp, the swimming pool is shaded beneath an elegant marquee. The opulent canvas pavilion at the centre of the camp dates from the 1940s, and it serves both as a mess tent and a museum of curios. The wine selection rivals that of any luxury hotel, you can play pool on the antique table, and the library is well stocked as well. 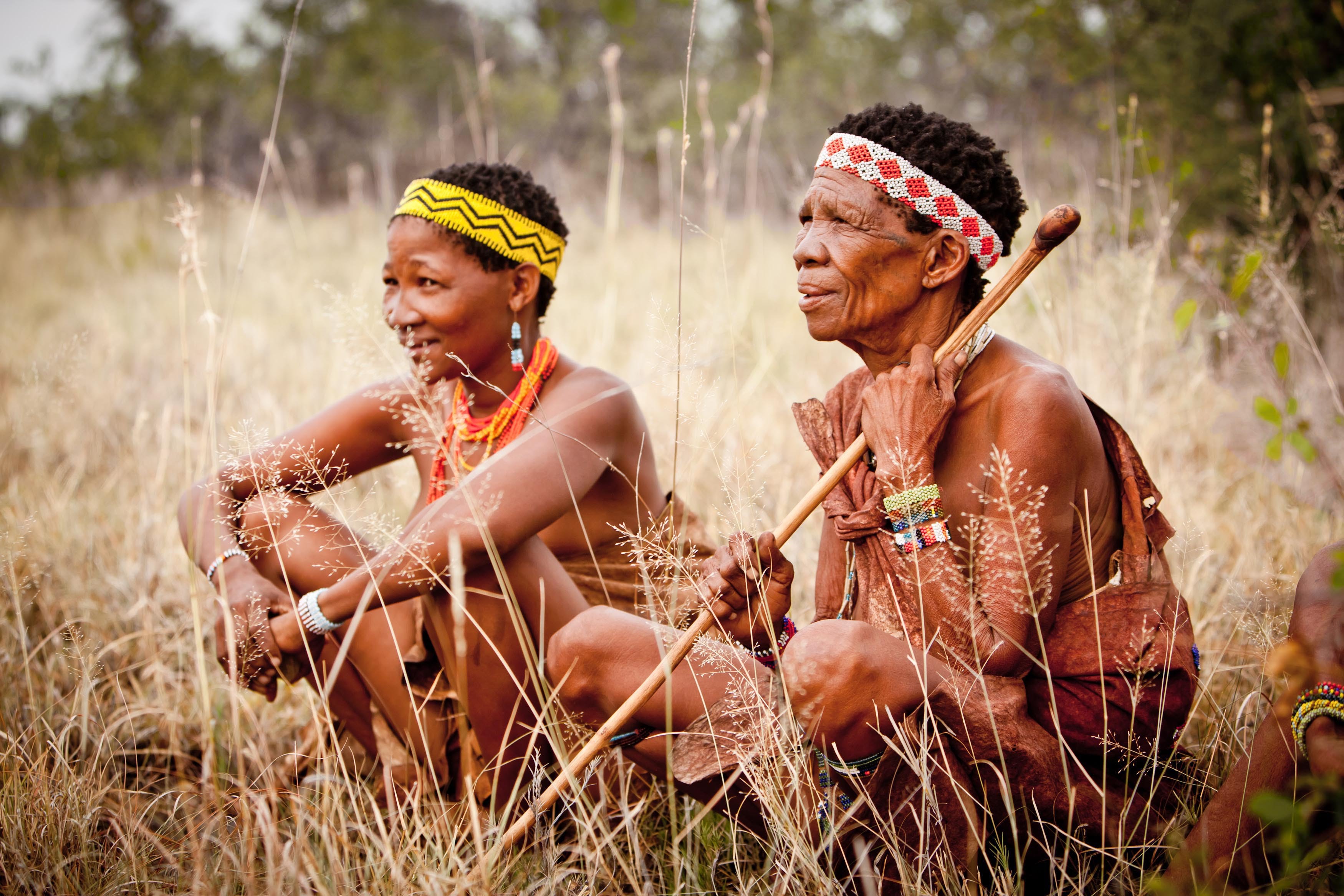 The setting of Jack’s Camp in the desert makes for sublime sunrises and sunsets, but there’s far more to it than this. You will want to rise early whilst the air temperature is still cool and follow your Zu/’hoasi Bushman guide on a walk out onto the pan. There’s no better way to learn about the flora and fauna of the desert, or to appreciate the wealth of knowledge which has been passed down through generations of Bushmen to enable them to survive in the harsh environment.

To travel further afield, saddle up and ride across the salt encrusted pans on horseback. In the green season (November to mid April), you can ride amongst the herds of zebra and wildebeest, moving amongst them in a way impossible in a 4×4. There are options for quad biking, too; barrel across the scorched earth to Kubu Island on a multi-day quad bike expedition, camping each night beneath the stars. 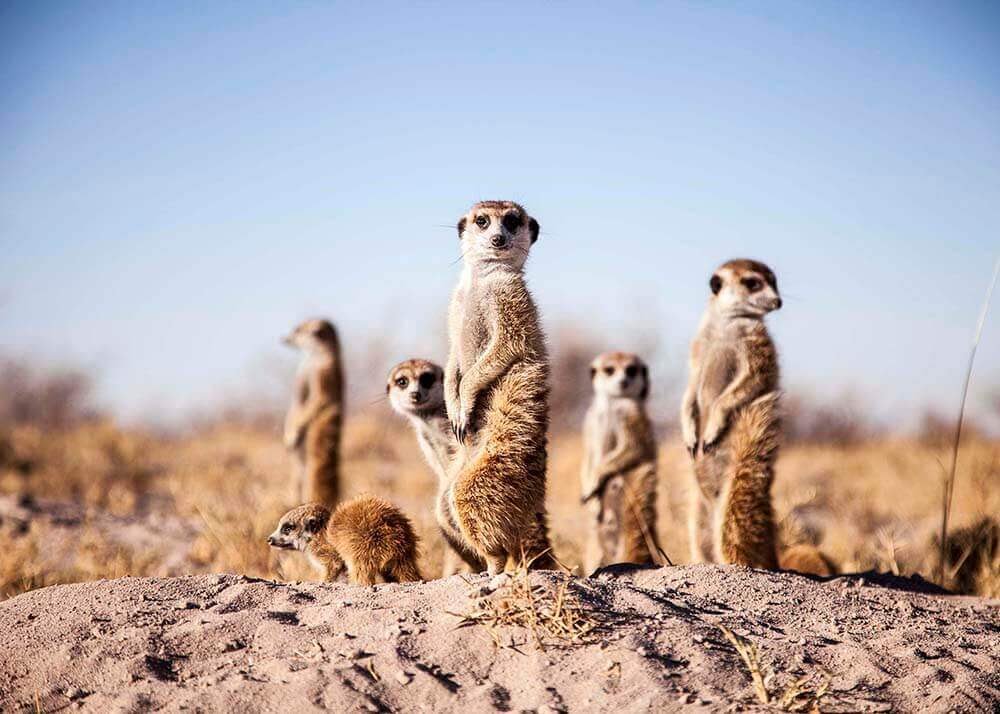 The desert is far from empty; everything from elephants to brown hyenas, aardvarks and Kalahari lions have adapted to survive in the arid environment in and around the pans. But the most loveable of all these creatures are the meerkats, whose curious antics will keep you entertained for hours.

There’s a habituated meerkat population close to Jack’s Camp, and visiting was the highlight of my stay. For an hour or so I sat on the sand and became a meerkat climbing frame. These cheeky critters are definitely wild, but their curiosity gets the better of them when they realise you are not a threat. The magic of Botswana is in the otherwise unimaginable closeness of such wildlife encounters, and the peace you feel knowing that there is no one else around.