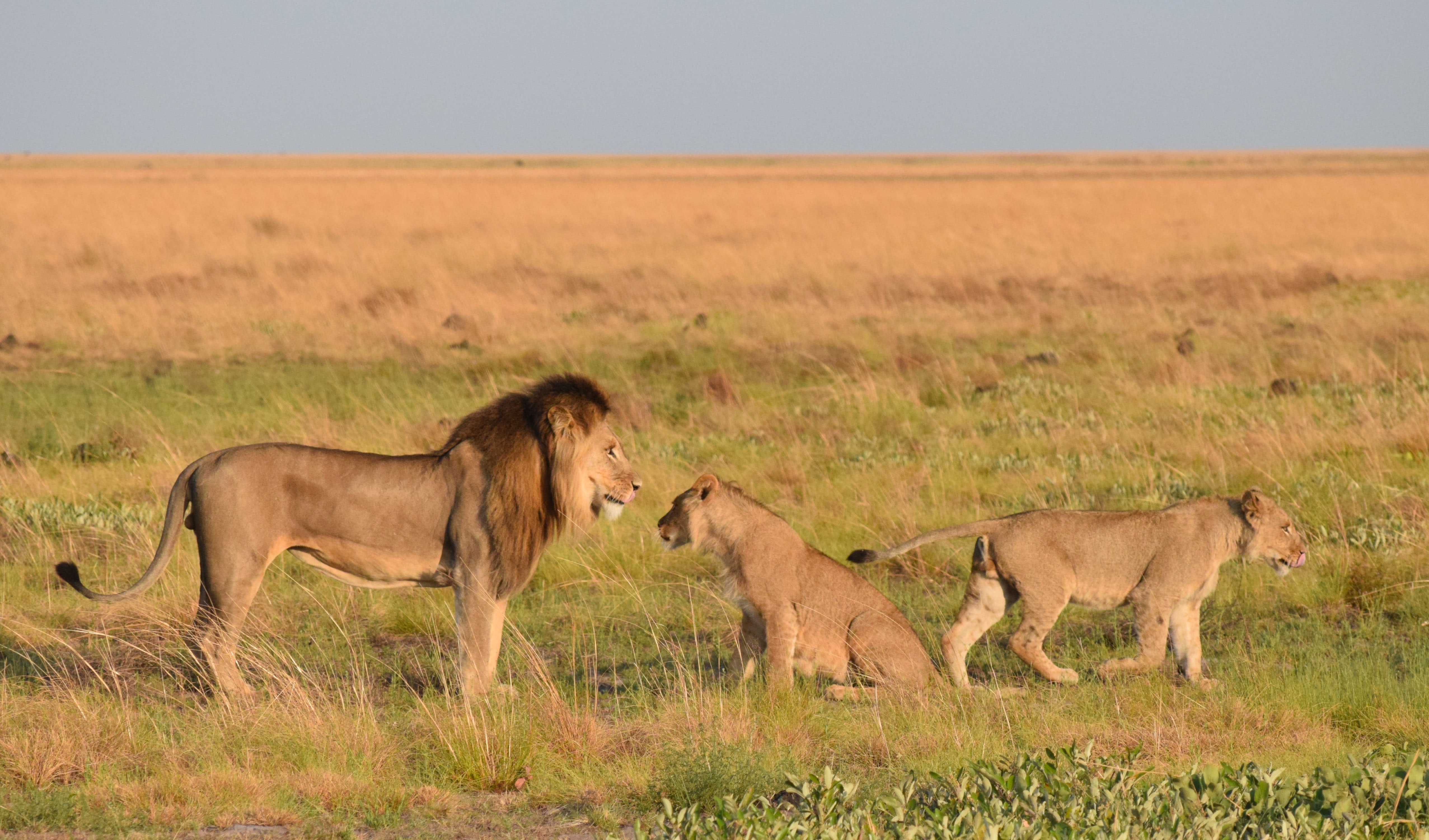 “Wilderness is not a luxury but a necessity of the human spirit,” wrote Edward Abbey. It is as if he stood upon the deck of Time+Tide King Lewanika and looked out across the Liuwa Plain.

Zambia’s Liuwa Plain National Park seems to lie at the very end of the Earth. The last vestiges of human habitation give way to grasslands as far as the eye can see; you can drive hour after hour and still not feel any closer to the horizon. But this wild landscape, though vast, is far from empty. The second largest wildebeest migration in Africa moves back and forth across the plain, and with it herds of zebra, packs of hyena, cheetahs, and lions, too.

The park stretches 1,390 square miles towards Angola, but within its confines is just one permanent camp, Time+Tide King Lewanika. Even when full, it accommodates just 15 guests, making it one of the most exclusive safari lodges in Africa. You have the entire national park — and all of the wildlife in it — to yourself. 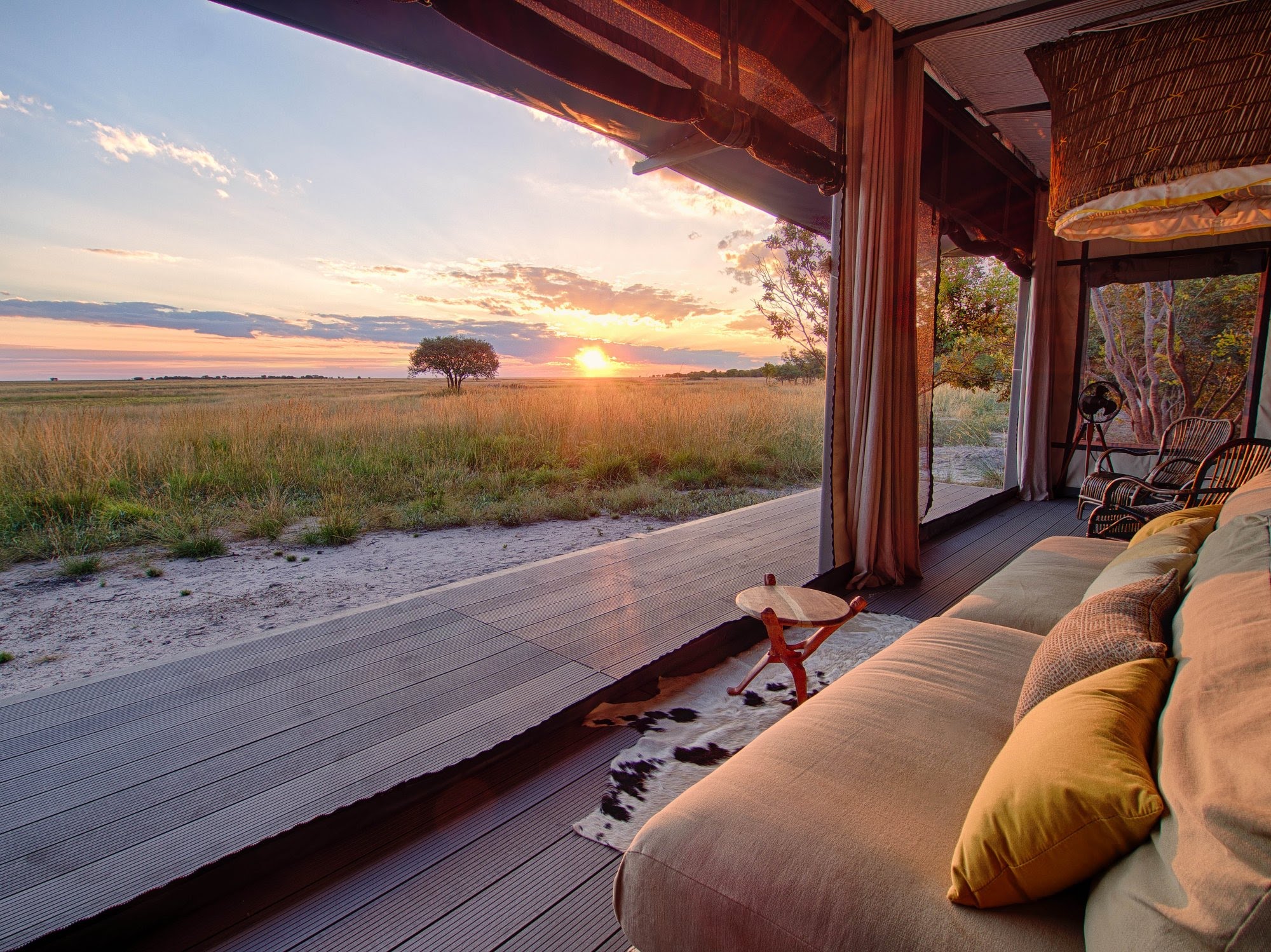 You can access the lodge via helicopter, but for me the journey was as important as the destination. I opted instead to drive, crossing the natural barrier of the river on a floating pontoon, then continuing on by 4×4. In the jovial company of Innocent, a guide with a lifetime of knowledge, I started to observe the terrain more intently, wondering what was hiding in the grass.

The light was fading as we reached the lodge, but that wasn’t the reason I didn’t initially see it. Set against a thicket backdrop, its roofline well below the tops of the trees, Time+Tide King Lewanika is exceptionally well camouflaged. Architects Silvio Rech and Lesley Carstens — whose extraordinary creations also include Miavana in Madagascar and the Ngorongoro Crater Lodge in Tanzania, two of the most lauded properties in Africa — wanted this structure to have a minimal impact on its surroundings. The sweep of thatch which forms the roof is exactly the same colour as the dry grasses of the plain; the roughly hewn wooden pillars which support it are native timber, the same diameter as the trunks of the trees behind. 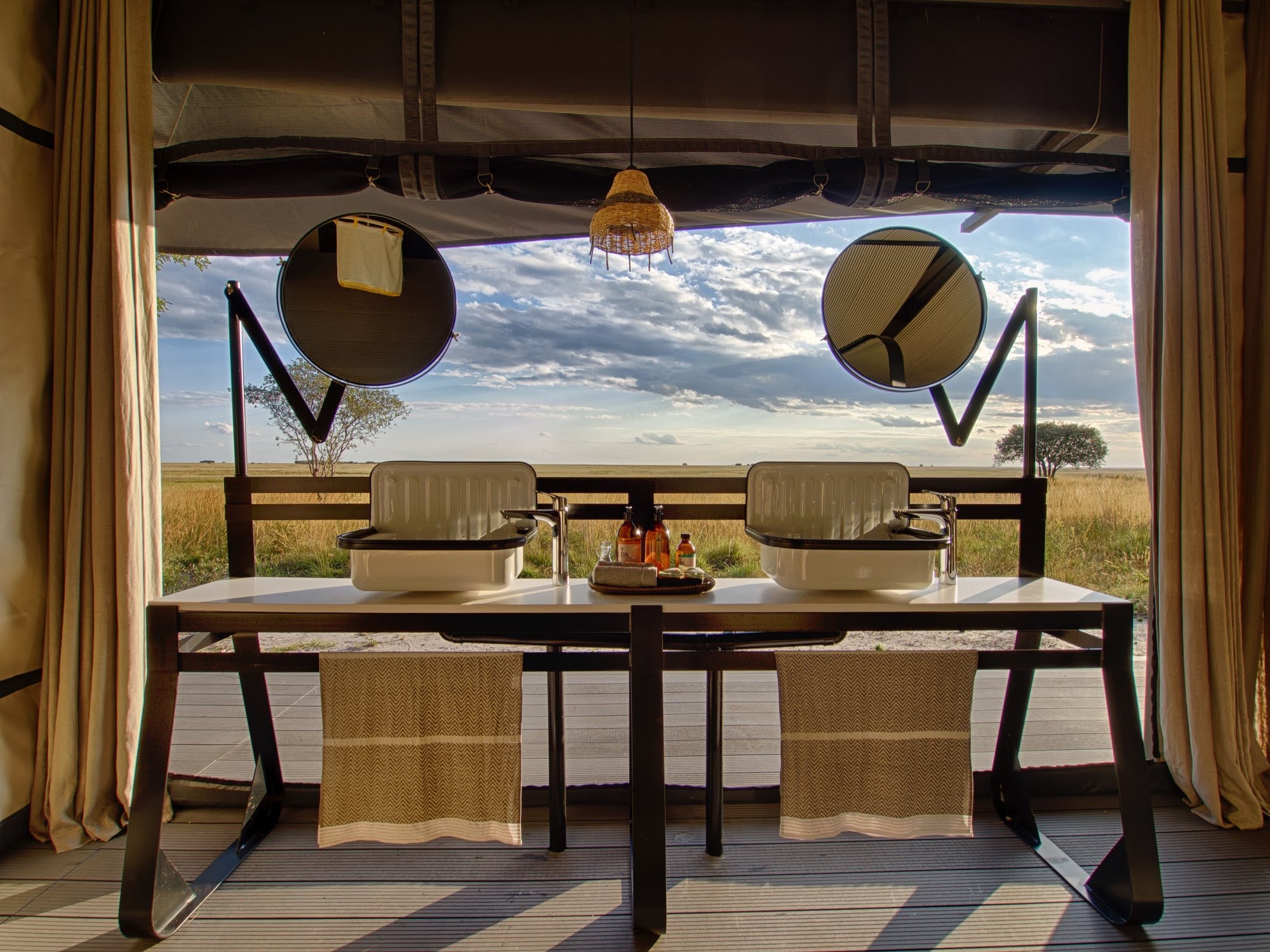 A welcome party awaited our arrival. Helped down from the 4×4, I felt like a 1930s lady explorer. That sense certainly did not diminish as I was handed first a chilled towel to wash away the dust, and then a virgin cocktail.

The ranger who led me through the trees to my suite was armed, which at first seemed rather dramatic. It turns out, however, that from dusk until dawn, all guests must be escorted in case one of Liuwa’s lions strolls by. Reintroduced to the plain in recent years by African Parks, the lions were first kept in a boma not far from the lodge, and hence regard this as their own backyard. Completely wild, there’s always the possibility that a warning shot might be required to drive one off.

Accomodation at Time+Tide King Lewanika is in six expansive tented suites, three either side of the main lodge and all looking west towards the sinking sun. The walls are a thick, grey canvas, but this is the only aspect which is reminiscent of a tent. The base is a wooden deck, the roof of solid construction, and the interiors quite sublime.

The interior of each suite is open plan, the importance of which becomes clear when during the day the canvas walls are rolled up to reveal the panoramic views. Wherever you sit or stand, the lines between the inside and outside are blurred and the breeze blows through.

It’s clear that Rech and Carstens have paid just as much attention to the colour scheme and furnishings as they have to the lodge’s outer structure. The combination of bluish grey and pale yellow is an unexpected but undeniably attractive one, and it perfectly complements the natural hues and textures of the leather headboard on the kingsize bed, the old fashioned wicker chairs, and the woven grass-reed rug. I could have sat for hours on the sofa, a tipple of something in hand from the drinks selection on the stand behind, just looking out at the plain. 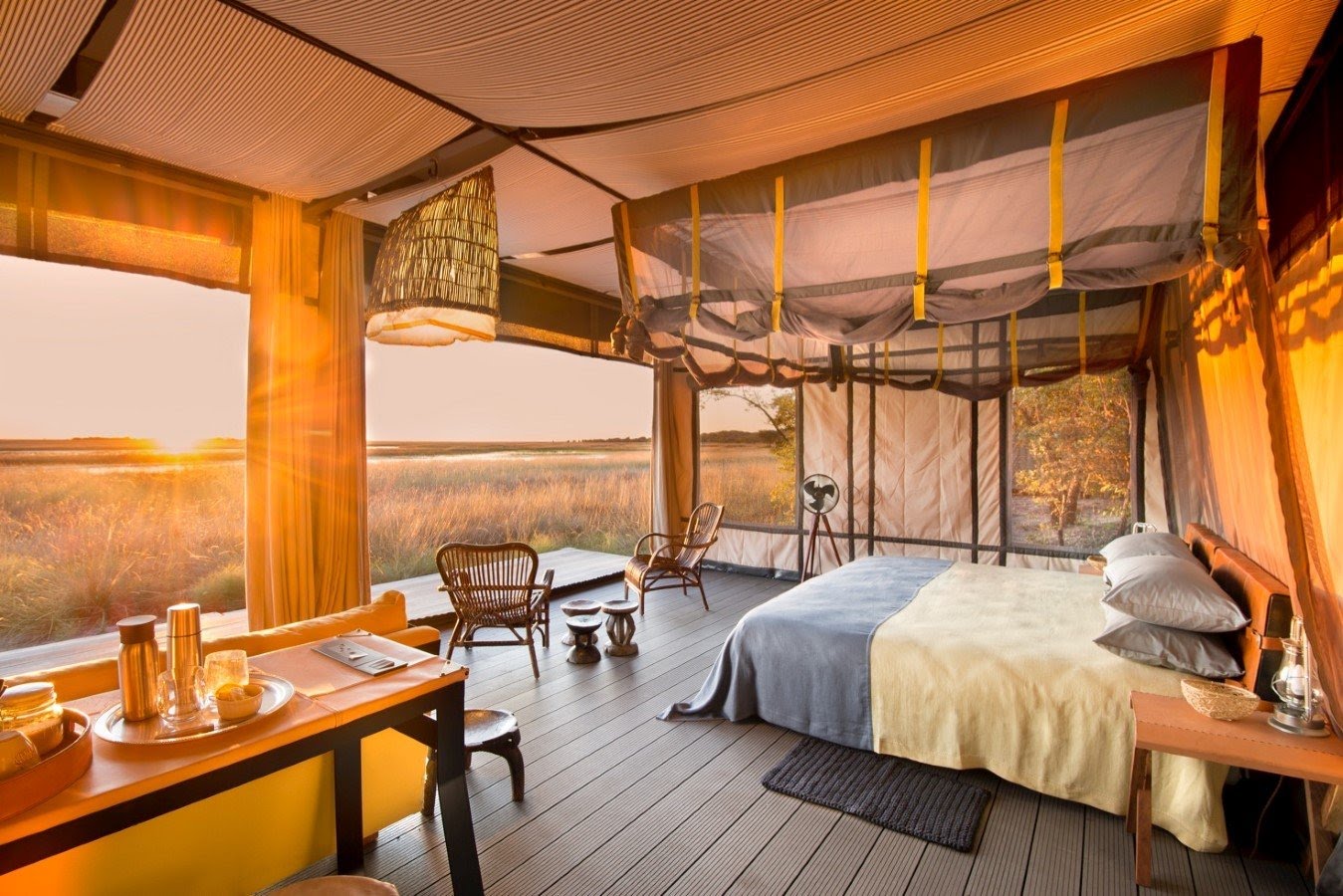 The same view extends into the bathroom area, which is separated from the rest of the suite by a movable folding screen so as not to unnecessarily break up the space. Everything you might need — the double vanity, beautifully woven towels, finely fragranced toiletries, and a strong, hot rainshower — are indoors, but the real treat is outside on the secluded deck. I stood on the deck, the wood still hot beneath my bare feet, as the water from the outdoor shower poured down my skin. Above me, the first stars were already sparkling, and on the horizon was the last deep pink glow of the day.

A drink is a must before dinner, and the bar in the lodge is remarkably well stocked for such a remote location. A gin and tonic really has no competition on a warm Zambian night, though the barman will no doubt angle to make you one of his more elaborate creations. Once all the guests had amassed, it began to feel like a private dinner party as we sat at the long communal table, hosted by the lodge’s charming manager. The excellent South African wines flowed freely as course after course, each one prepared with fresh seasonal ingredients and beautifully presented, was brought to the table. 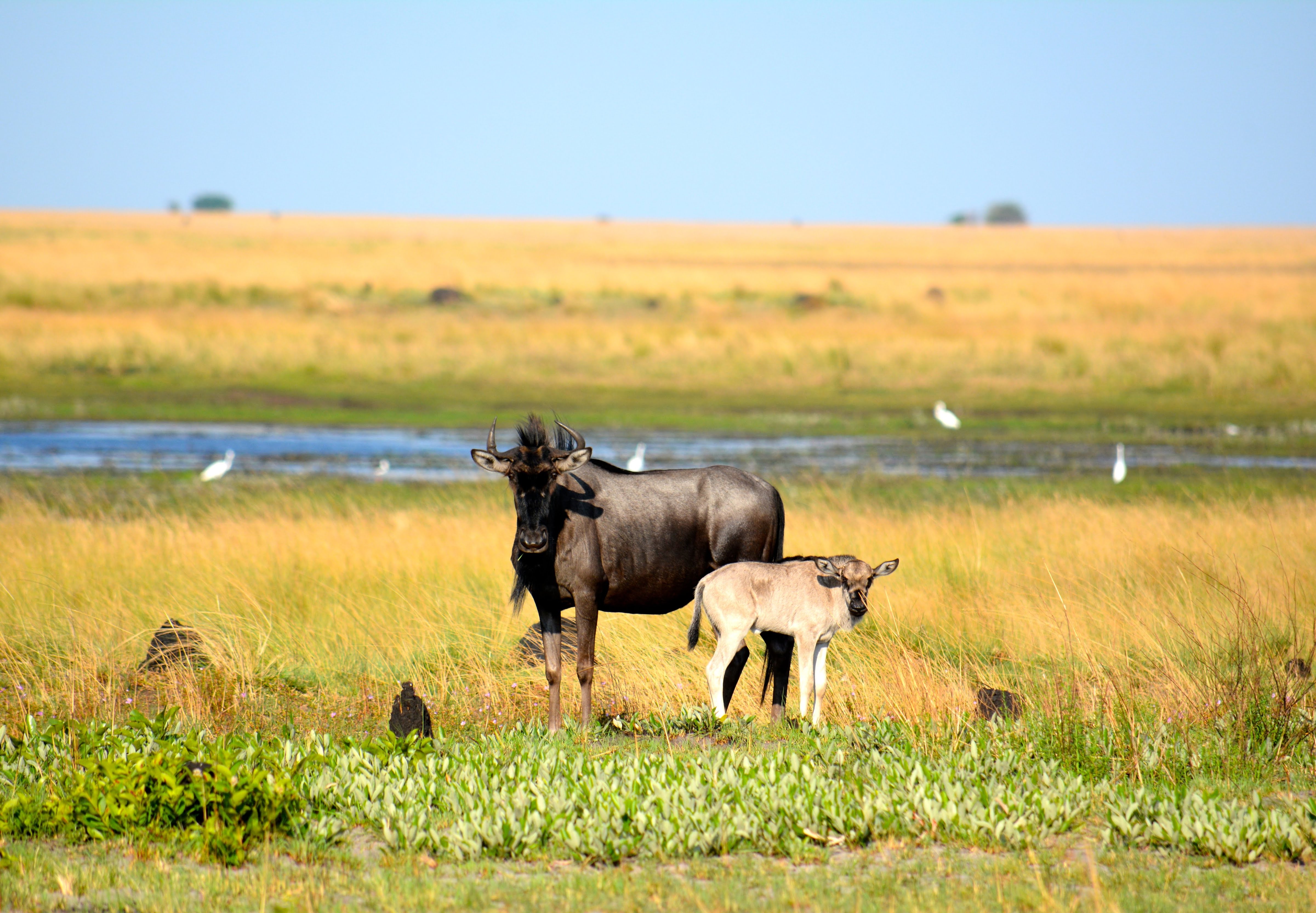 Conversation at dinner inevitably turned to the day’s sightings, and what we hoped tomorrow might bring. I for one wanted to drive out in pursuit of the wildebeest herds, a bucket list dream since I first watched The Lion King. What I was not prepared for was the other close up encounters that the journey would entail: two cheetah hunting for their supper; a family of lions drinking and playing by the pan; and coming almost nose to nose with a hyena cub as I squatted on the ground and he approached me for a good old sniff.

The enchantment of Time+Tide King Lewanika is in no one thing; it is in the combination of location and the solitude it affords, the landscape and the sensitive way the lodge sits upon it, the impeccable yet understated service, and that the wildlife is not only abundant but completely undisturbed by your presence. It is, in short, the finest kind of wilderness. 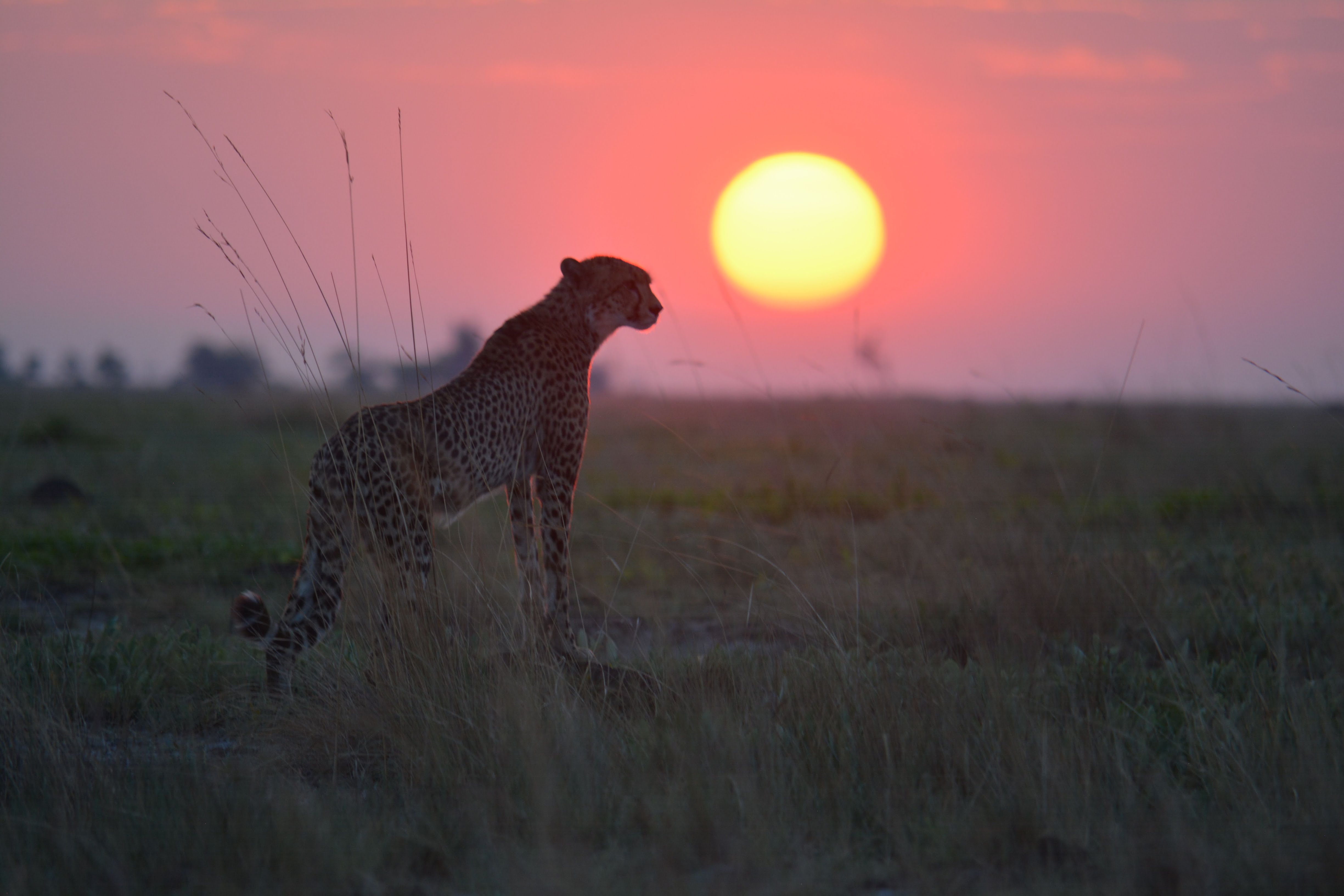