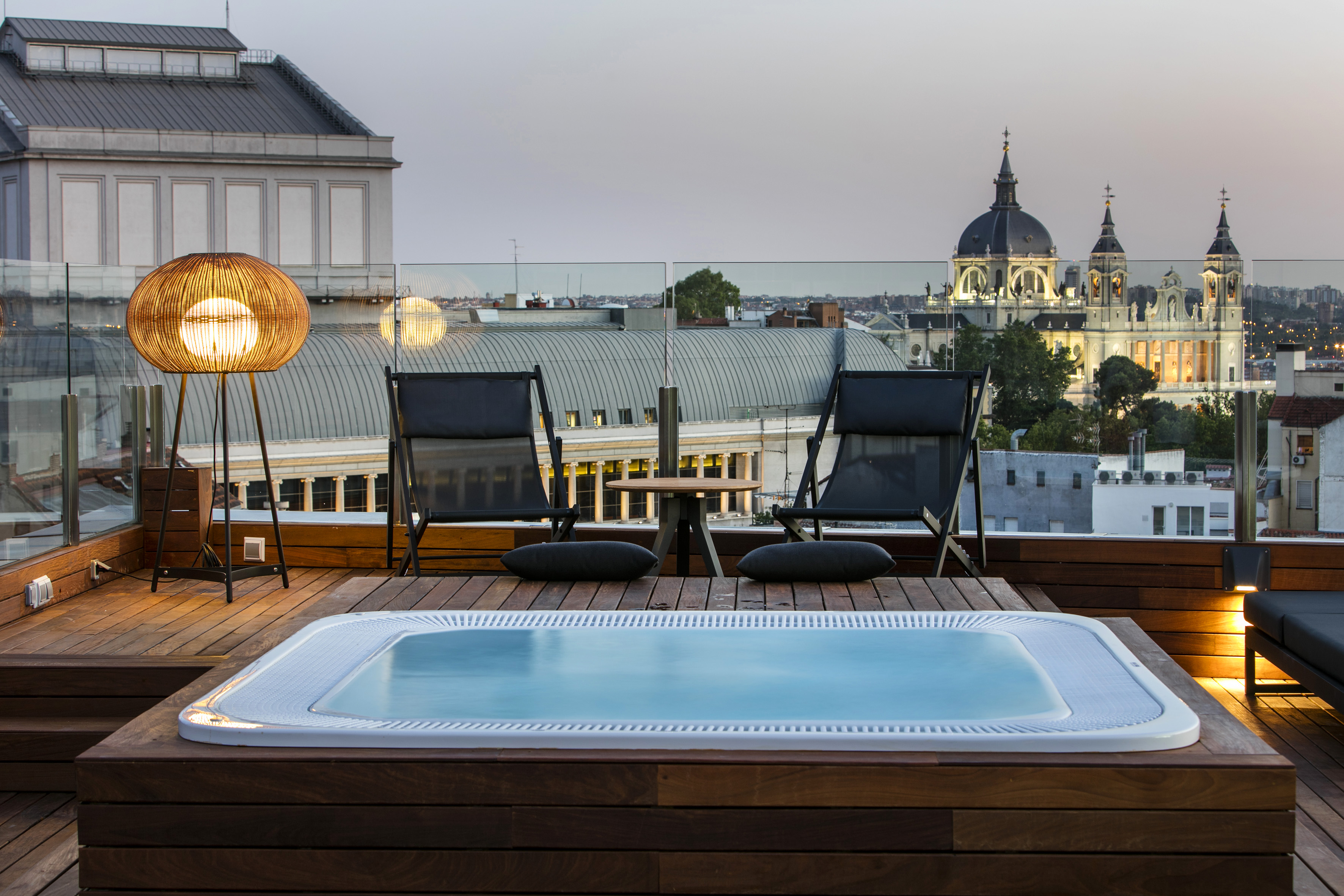 Spring time was fast approaching in Madrid and we arrived just in time to catch the capital city in full bloom. We stayed at the Gran Meliá Palacio de los Duques; a luxury hotel situated in the historical heart of Madrid and one of the city’s leading five star hotels. The Gran Meliá is also a member of the exclusive “Leading Hotels of the World” club and this comes as no surprise after the seamlessly perfect stay we had.

We arrived on a Saturday morning; welcomed by blue skies. Our driver avoided the chaotic Saturday morning streets of the Spanish capital and took us on a detour round the cobbled side streets instead. I found myself frantically looking in every direction trying to capture the details of each typically Spanish street. 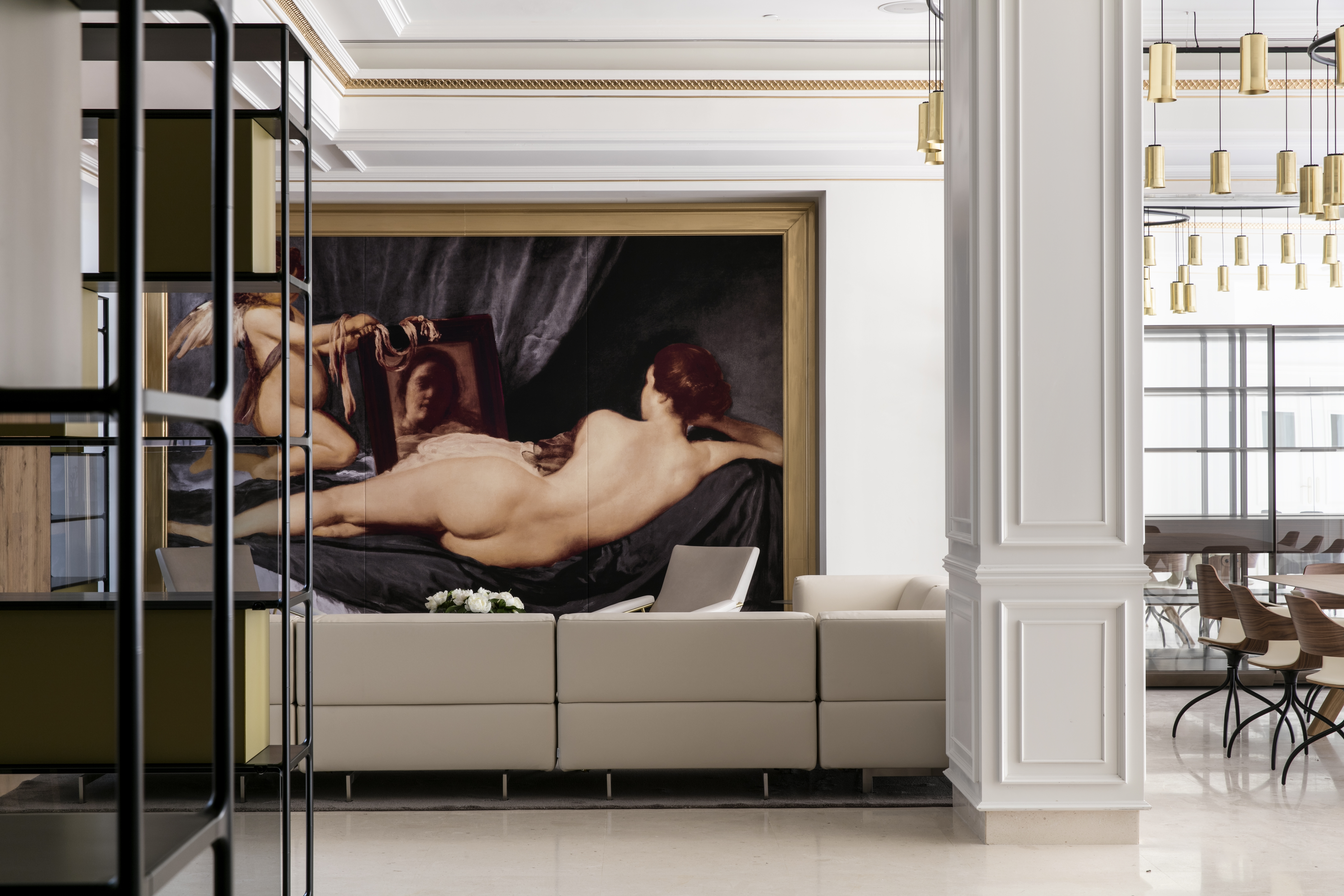 The Gran Meliá Palacio de los Duques was once a palace and home to the Dukes of Granada de Ega and Villahermosa in the mid-nineteenth century, hence its name which translates to Palace of the Dukes. The hotel still exudes an essence of royalty today and every effort is made to make each guest feel somewhat royal. 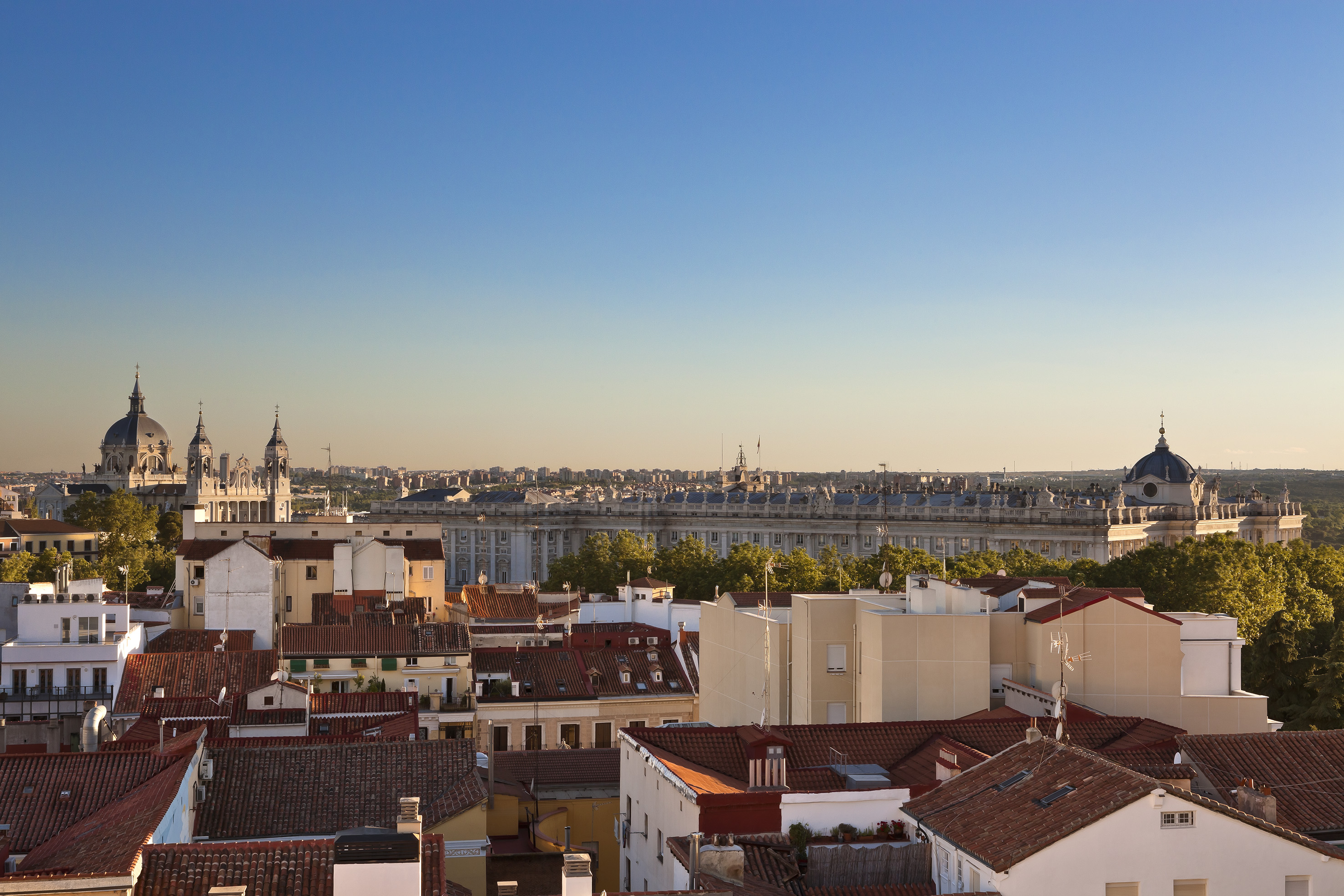 As our bags followed behind us, we entered the hotel and gladly accepted the invitation to enjoy a glass of Champagne while we checked in. Shortly after, we were escorted to our room on the top floor of the hotel which had its own balcony on one side, and a window facing the old palace courtyard on the other. The Gran Meliá Palacio de los Duques offers 180 rooms and suites – many of which overlook Madrid’s rooftops, the Teatro Real and the Palacio de Oriente – and all of which feature reproductions of Velázquez’s most famous paintings and exquisite artwork.

The hotel is dedicated to renowned Spanish artist Velazquez, who had lifelong bonds with Madrid as Philip III and Philip IV’s court painter, and reproductions of his works are showcased throughout the guestrooms and public areas of the hotel. 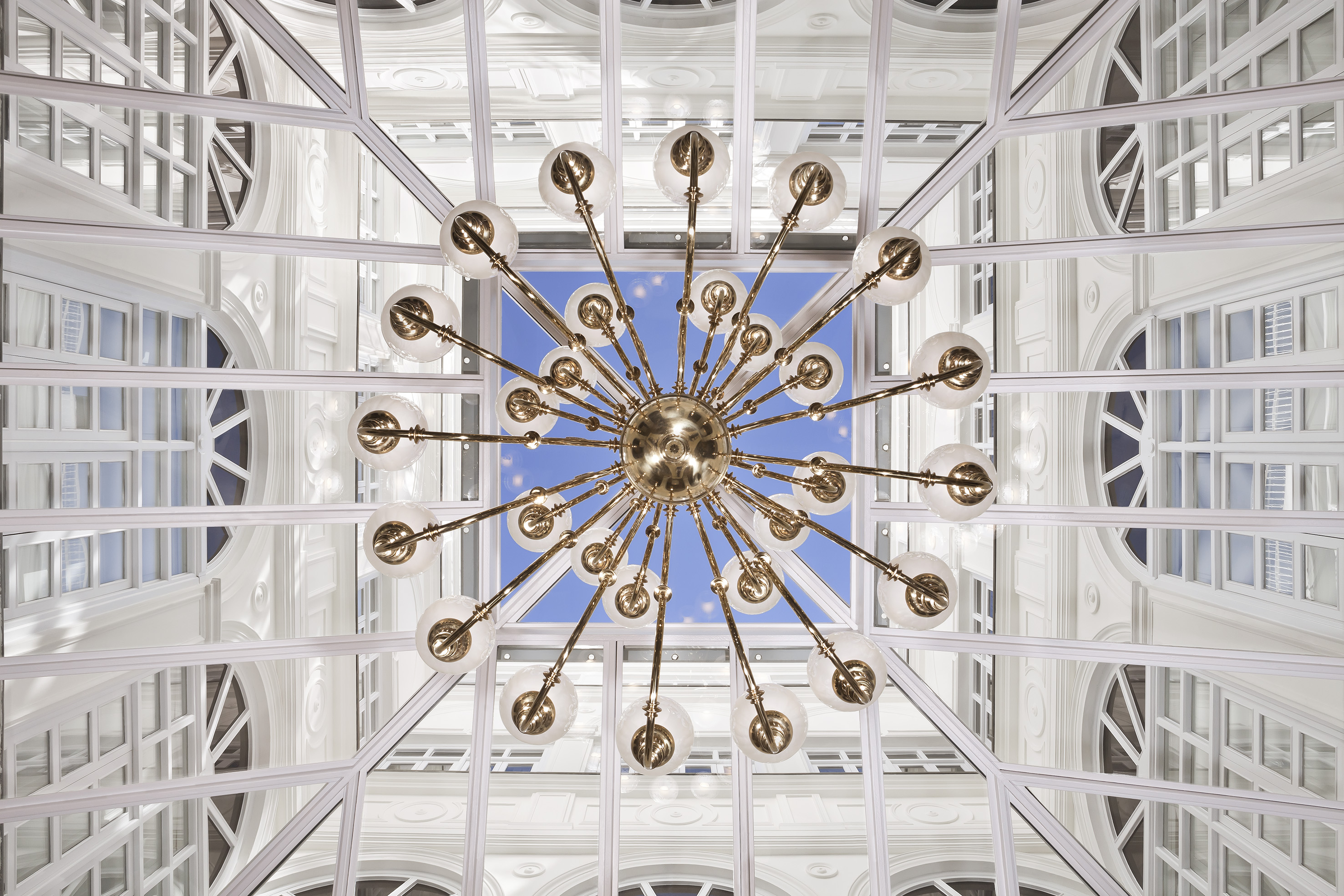 There are three outstanding dining opportunities to be had at Gran Meliá Palacio de los Duques: The Coroa Gallery Lounge and Gardens occupies a large space on the ground floor of the hotel and extends out into the old palace courtyard during the warmer months, while the Montmartre 1889 Restaurant occupies what was once the palace stables, and at the beginning of this year the hotel opened Dos Cielos which is run by the Michelin star Torres brothers. 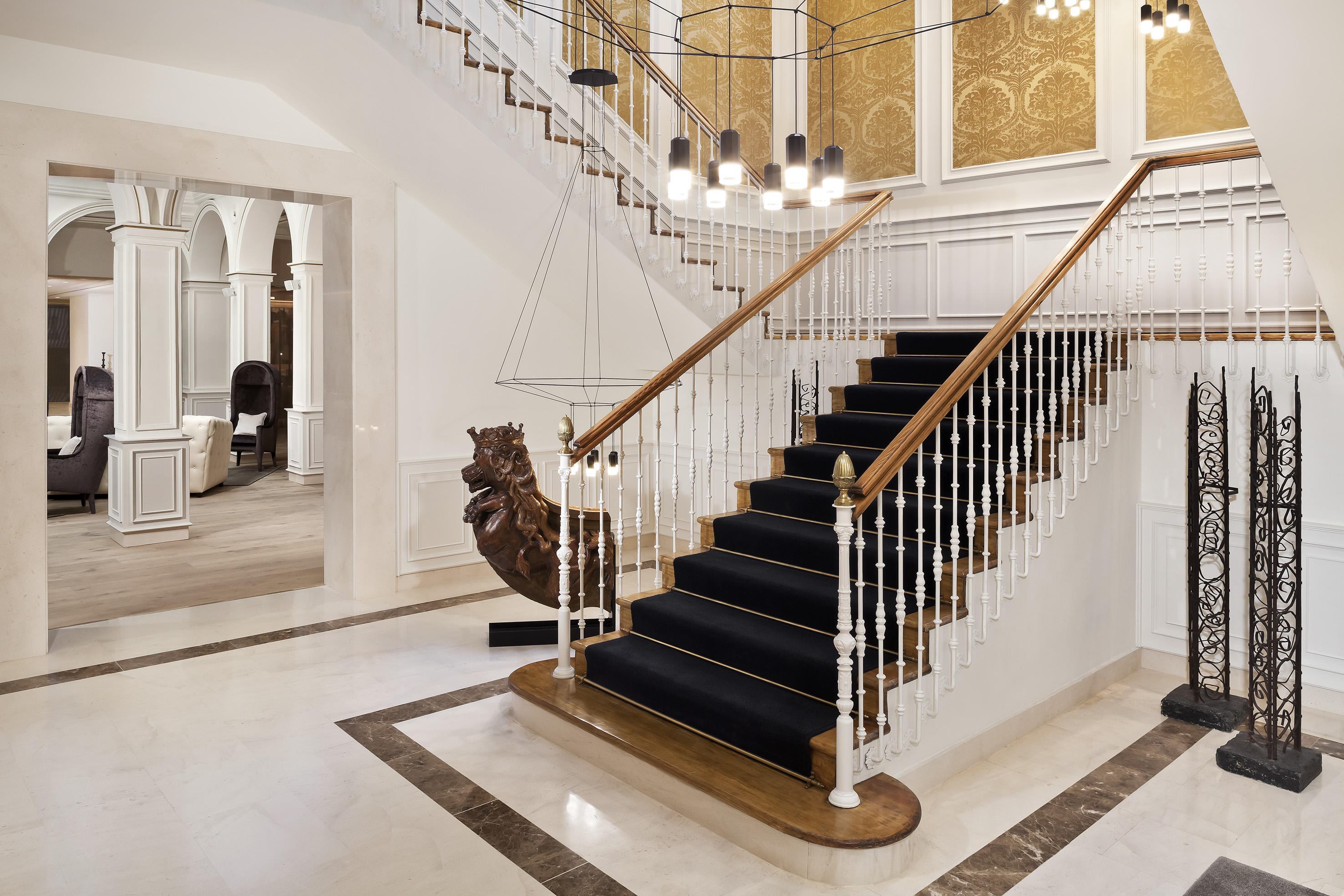 The Coroa Gallery extends the Velázquez theme from the hotel through to the restaurant by offering a Culinary Art through Time menu. The menu begins with the seventeenth century which is reference to the Baroque which is often thought of as a period of artistic style – easily interpreted detail to produce drama, tension, exuberance, and grandeur in sculpture, painting, architecture, literature, dance, theatre, and music.

The Coroa Gallery introduces their menu using this artistic period in which Velázquez was one of the main protagonist and offers classical Spanish tapas alongside some international dishes. The menu moves on to the nineteenth century which was the time of realism, and then progresses into the twentieth century which was “totally against classical rules and conventional art”. The final part of the innovative menu travels back in time to the fifteenth century to the renaissance which marks the end of the salty menu and the beginning of the sweet world. 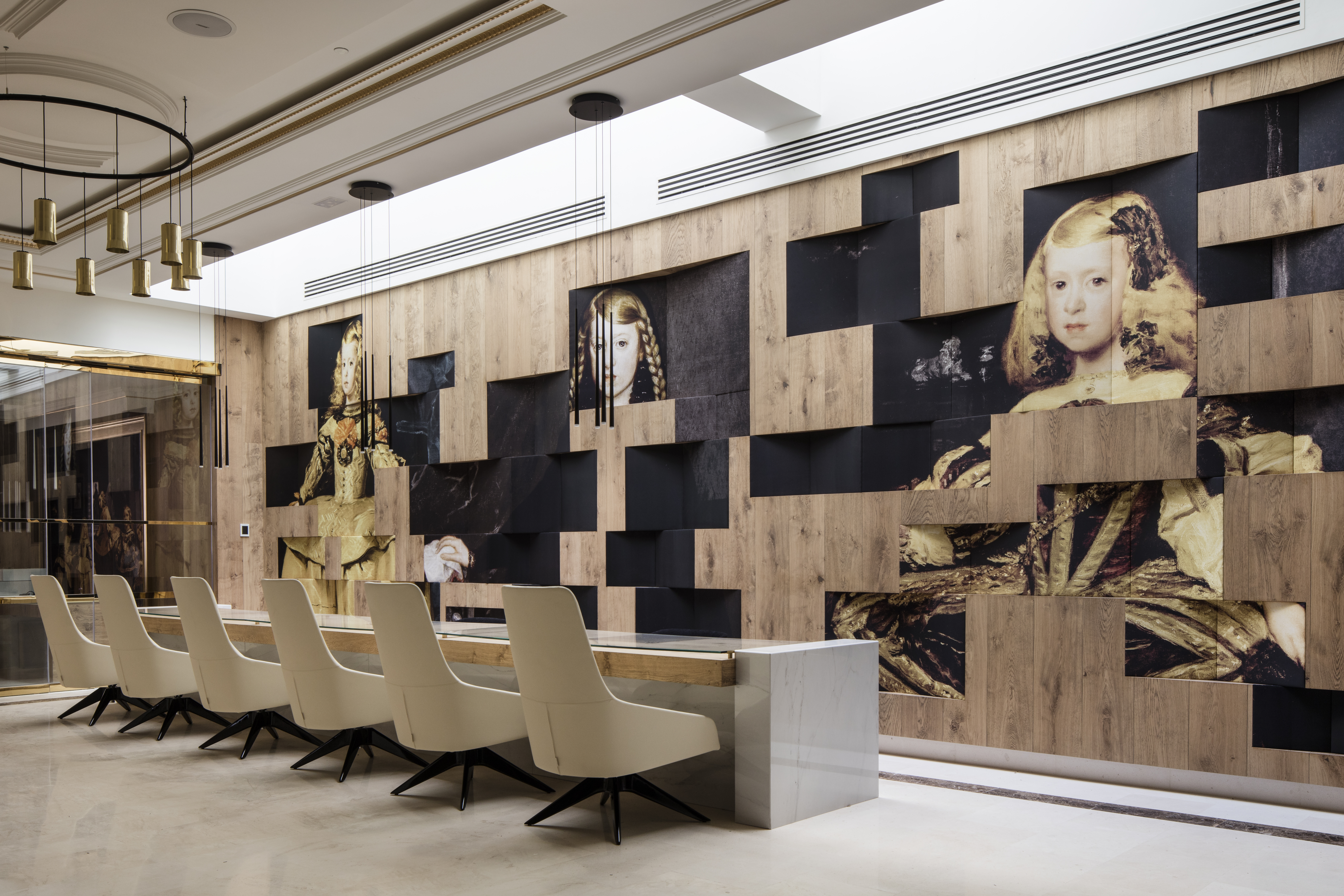 My guest and I shared the salmon risotto to start which was like no other risotto we’d ever tasted. Each mouthful was a moment to savour and neither of us wanted the dish to end, but the next course was cooked-to-perfection beef tenderloin, which was grilled and served with potato puree and baby vegetables and certainly did not disappoint. While we sat and absorbed our surroundings inside what was once home to royalty, we dipped fresh strawberries into a rich velvety chocolate fondue to conclude the meal, and of course we washed it all down with traditional Spanish sangria.

Somewhere else to enjoy traditional Spanish sangria is most definitely the hotel’s rooftop which overlooks the Royal Palace of Madrid and typically Spanish terracotta rooftops. In the summer months, guests can enjoy the incredible views from the rooftop swimming pool and hot tub which are surrounded by four-poster Bali beds and sun loungers, while also being waited on by the attentive and friendly staff at the Gran Meliá where no request is too big or small. 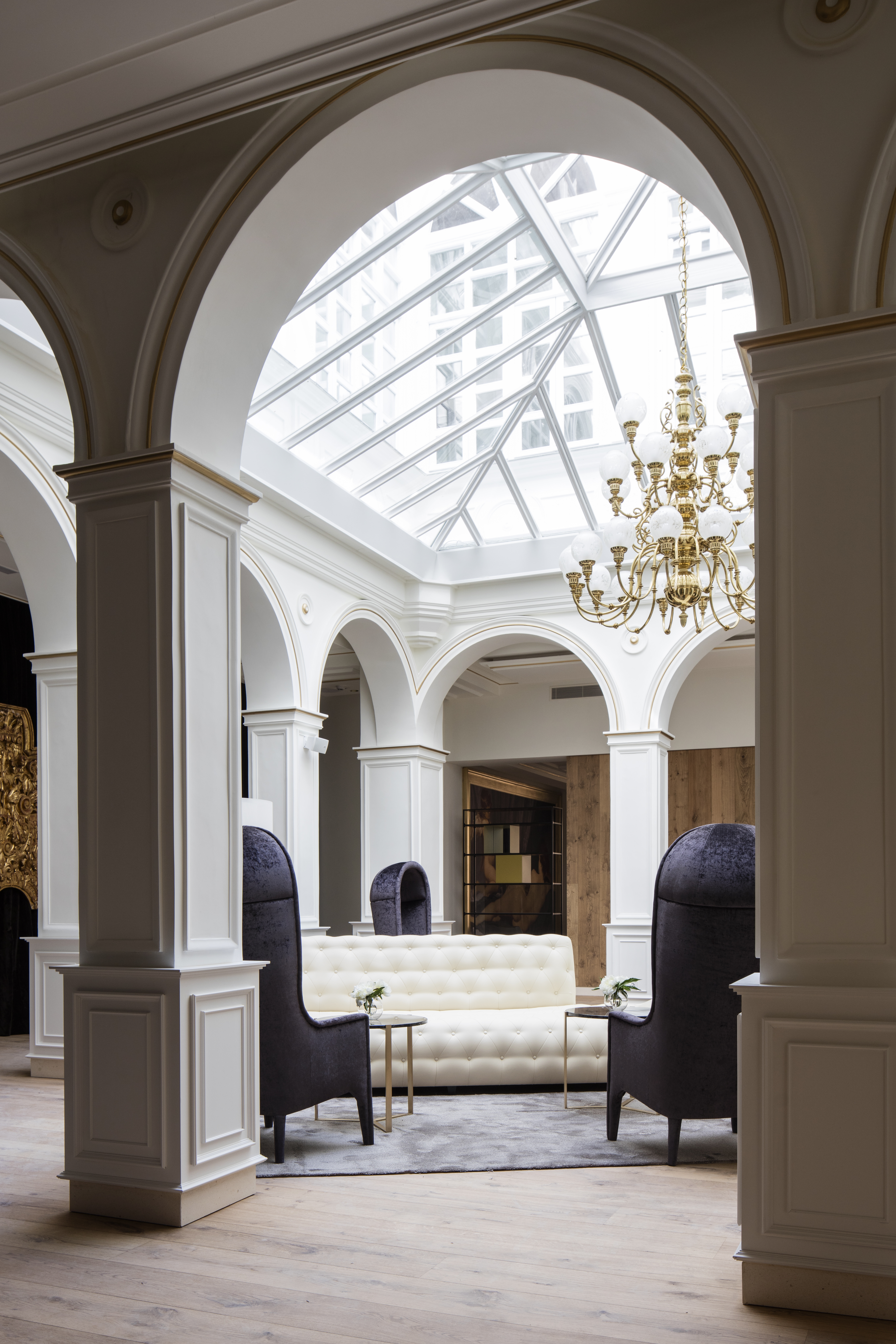 The hotel is located less than a minute walk from the Royal Theatre, and only two minutes from the Royal Palace of Madrid, which are both an absolute must if you’re visiting Madrid. Also close-by is the Almudena Cathedral and the famous Puerta del Sol. The famous Gran Via is a short five-minute walk from the hotel which is home to some of the city’s finest restaurants, bars, and theatres, and of course the impressive Casino of Madrid which occupies an almost 200-year old building. You won’t be short of things to do in Madrid, and the Gran Meliá Palacio de los Duques is the perfect place to call home while you’re staying in the Spanish capital.