Casino at the Casino, Feed Me Films Going to the cinema to watch a film is fine. The experience is pretty average nowadays; overpriced popcorn, a seat next to someone who you’re sure must be the noisiest eater in the world, and the added novelty of people getting up continuously throughout the movie.

If this all sounds painfully familiar then listen carefully, I’m here to tell you that there’s a better way of enjoying your favourite films. Feed Me Films is a company formed by Nick and Alex Rainey: London-based brothers with a passion for good food, drinks and, most importantly, great films. Together they have created a concept to enable a more unique and immersive experience for film buffs and movie-goers alike, combining all the right ingredients to make the most fantastically memorable events.

‘Casino at the Casino’ was the intriguing title of their first screening event, featuring Martin Scorcese’s iconic Casino set in early-seventies Las Vegas. And where better to watch a film about gambling than in an actual casino? The majestic London Hippodrome was chosen to play host to the event and was the perfect venue for the Mafioso-inspired screening.

On entering the historic building, we were welcomed and promptly led up some stairs to where bar staff awaited us, ready to pour our drink of choice. We were then shown through a discreet corridor and into the beautiful cabaret-style theatre where we were seated at an intimate booth, reminiscent of a mafia-style restaurant. The red leather seating, round tables and raised terrace evoked a real sense of a seventies casino.

A solo piano player on stage set the scene perfectly for a Scorcese classic, playing slow jazz as guests filed in – some authentically clad in mobster-inspired furs and pin-striped fedoras.

The room was in semi-darkness, save for several candles on each table flickering upon the faces of those seated. Candy-striped boxes of complimentary popcorn were a charming addition to the experience – and of course this tasted a thousand times better than regular popcorn. As the last of the guests were seated, the piano player exited his post and the film was ready to begin. 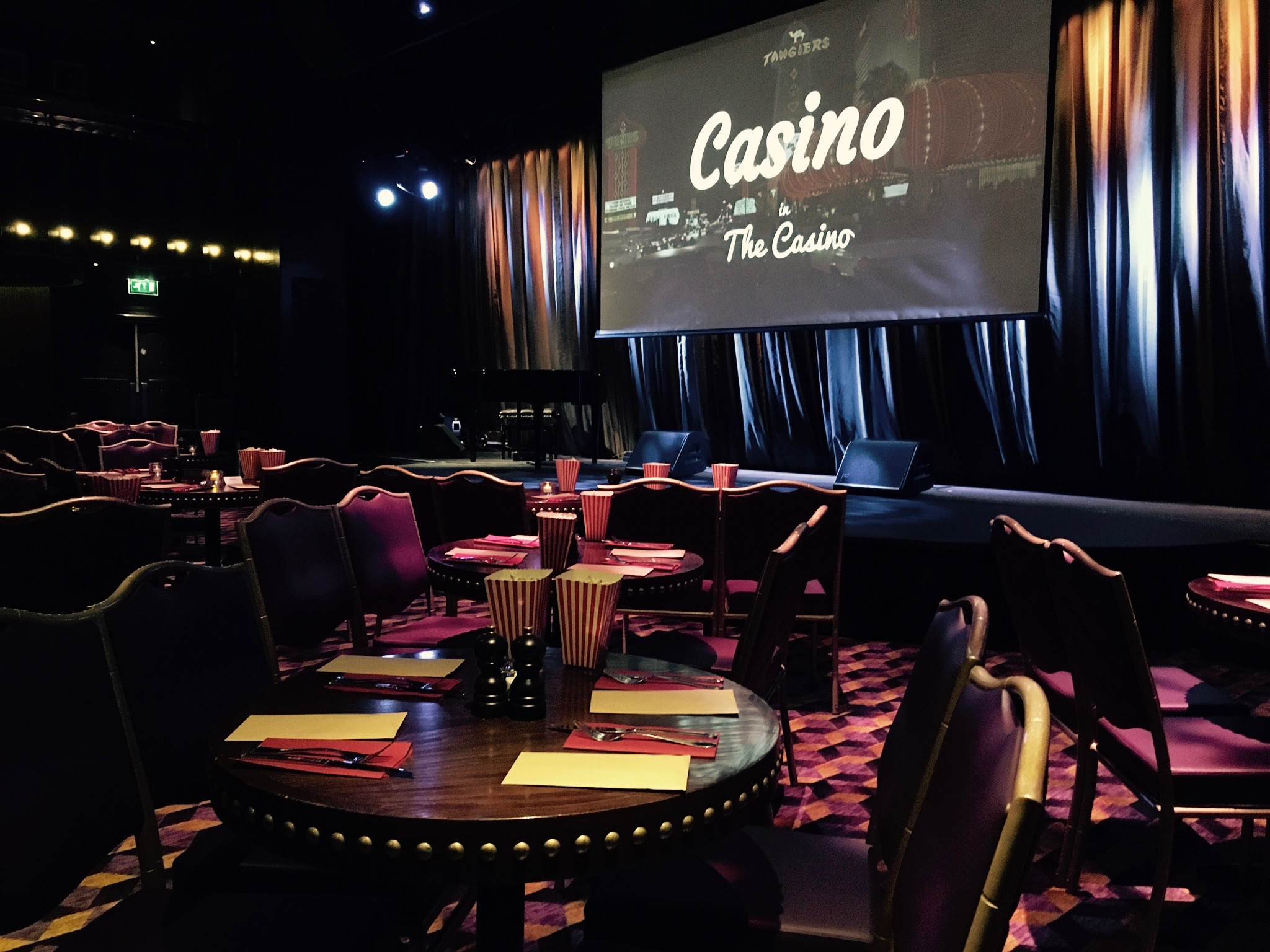 The unmistakable voice of Robert Di Nero accompanied by the epic score and explosive title sequence of Casino assures everyone in the audience that we’re about to share in 178 minutes of pure Scorcese brilliance. Waiters promptly delivered the award-winning steak from the Hippodrome’s own Heliot Steakhouse, and served the alternative option of grilled salmon to those who had requested it. The main course was delicious and was the perfect addition to the film-viewing experience.

Attentive waitresses circulated the tables to ensure that glasses were not left half empty; you couldn’t help but feel doted on and encompassed by the luxury of the whole thing. A strategically timed interval gave the audience a chance to stretch their legs and reflect on the intensity of the first half. During the second half we were each treated to a Ginger McKenna-inspired dessert, which was lusciously creamy but came with a kick of ginger.

After thoroughly enjoying every second of the screening experience, guests were invited to go downstairs to the vintage basement casino room and try their hand at some classic games – with a ‘learn to play’ masterclass using mock chips, before opting to enter the casino upstairs and gamble with the real deal if you were feeling particularly lucky, or if that fourth cocktail had convinced you of being Sam Rothstein himself.

Feed Me Films have managed to revive the excitement and anticipation of the movie-going experience – offering an alternative way to view some of the most iconic films ever made whilst enjoying the most delectable food and drinks throughout. This genius idea has so much potential for transforming the way we choose to watch films, and the overall success of the night is testament to this and the fantastic attention to detail shown by the hosts. Feed Me Films more than makes up for all those disappointing trips to the cinema by returning the magic of the pictures to its former glory.

Tickets are still available for the next ‘Casino at the Casino’ event on the 27th February at the London Hippodrome.

Feed Me Films will also be launching ‘Bond Brunches’ very soon, showing a number of different James Bond films over a boozy brunch. Venue and dates are to be revealed in the next few weeks.