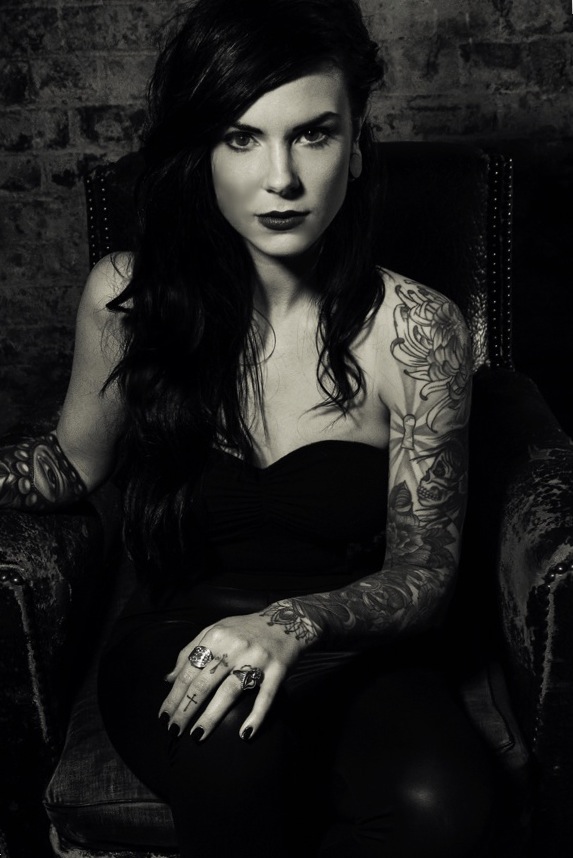 I was absent-mindedly scrolling past photographs of burgers, cats and various memes on Instagram, when something rather spectacular caught my eye.

It was a photograph of an intricately tattooed teacup and saucer, inked with undeniable precision. Those who know me best will tell you that I have an unhealthy obsession with vintage crockery, so you can imagine my excitement at this extraordinary piece.

This particular tattoo featured delicate flowers, which not only decorated the cup but were also scattered beautifully around it. The end result was simply exquisite and I was obsessed.

It transpired that British tattooist and fine-artist Cally-Jo Pothecary was behind the extraordinary piece. I spent the rest of the evening admiring her work, I was delighted to discover that each artwork was more spectacular than the last.

London-based Cally-Jo was an artist long before she picked up her first needle. She studied her craft religiously and obtained a degree in painting from the Winchester School of Art.

She recalled nostalgically: “I’ve been interested in tattoos for as long as I can remember. I grew up with people who had tattoos or worked in tattoo or piercing shops.”

Speaking of the transition from painting to tattooing, she added: “I think that the idea of being able to put my drawings on people permanently was pretty exciting to me. The thought of being able to draw and make art my career, I can’t imagine anything better than that.”

Cally-Jo reflected on the first tattoo she ever did. She revealed: “The first one I did was on my brother. I tattooed his nickname ‘Gonzo’ on his thigh in some terrible tribal writing.”

She added warningly: “It took me hours, I had no idea what I was doing and no one to show me how, so I just had to wing it! I definitely wouldn’t recommend attempting to tattoo someone unsupervised.”

Cally-Jo has come a long way since then. She has created a number of incredible tattoos; from bewitching pin-up girls to beautiful roses, that are illustrated so intricately that they would silence the harshest critic. 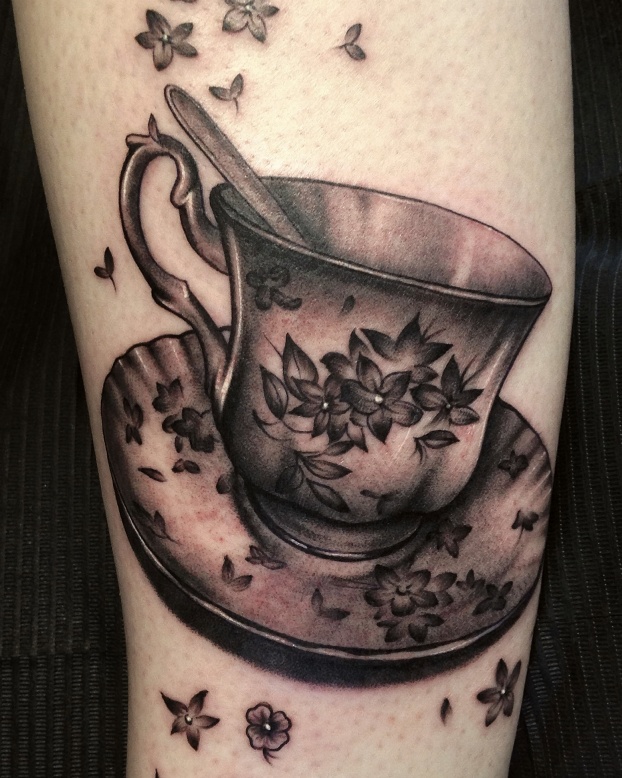 At just 24-years-old, Cally-Jo has achieved more than many twice her age could ever dream of. I am one of many that appreciate her extraordinary talent. She has amassed a vast following, which includes over 230,000 fans on Instagram. Cally-Jo has even attracted the attention of none other than actress Sienna Miller and pop icon Rihanna.

Speaking of her relationship with the pop phenomenon, she said: It’s pretty surreal to think that Rihanna likes my work. She started following me on Instagram a year or two ago and a friend messaged me and let me know.”

She added: “At the time instagram hadn’t been around very long, so I didn’t think it was actually her account till she started posting pictures of herself.”

Cally-Jo has also collaborated with world-famous tattooist to the stars Kevin McCurdy, better known as ‘Bang Bang’. Bang Bang has inked many of the entertainment world’s elite including; Cara Delevigne, Adele and Justin Bieber.

Cally-Jo was at the opening party of ‘Bang Bang Tattoo’ in New York when she first met Rihanna in person. Rihanna was so impressed that she flew Cally-Jo and Bang Bang to the Dominican Republic, where they collaborated on her famous intricate henna-style hand tattoo.

However, when it came to actually tattooing Rihanna, nerves almost got the better of her. She admitted: “I was hugely nervous when it came to doing Rihanna’s tattoo. The design process took a long time, so that gave me a little time to get myself together and have a chat with her while we worked.”

Cally-Jo added: “She was laid back and easy going and it wasn’t so bad once we got started. I definitely had in my mind that this was one of the most famous hands in the world and that I was responsible for doing a good job.”

The tattoo itself is pretty adventurous, just like Rihanna herself. It resembles a piece of decorative hand jewellery and perfectly complements Rihanna’s eclectic style.

Cally-Jo admitted that the tattoo isn’t to everyone’s taste, she said: There’s been a lot of positive and negative reactions but that’s the great thing about tattooing, it’s personal process and everyone has their own style.”

The opportunity to tattoo the most famous pop star in the world would be overwhelming for someone so young, but Cally-Jo remains utterly gracious about her position.

She said humbly: “I didn’t expect to end up tattooing Rihanna, I’m very grateful for the whole experience It’s definitely opened some doors for me recently.” 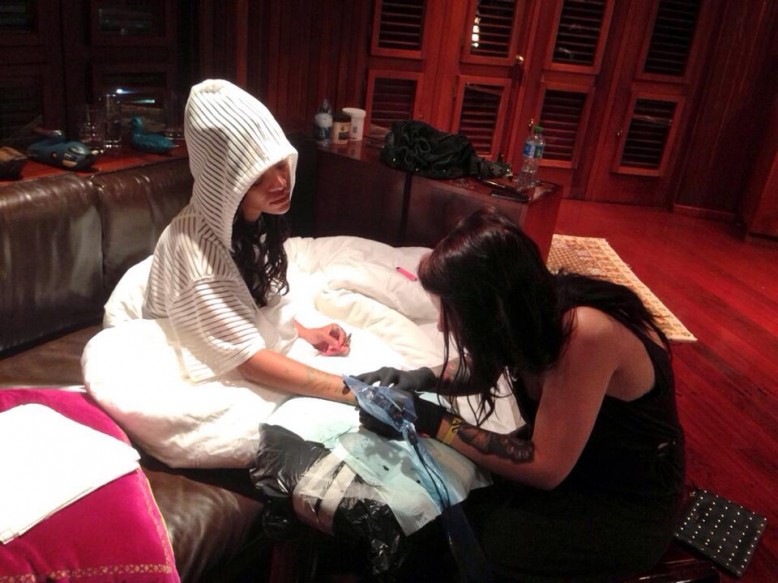 Cally-Jo has an undeniably signature look. Her tumbling raven hair frames a petite almost doll-like face. Perhaps the most noticeable part of Cally-Jo’s appearance is that her own body is a work of art. Dozens of tattoos decorate her alabaster skin, especially her arms which are dominated with fascinating designs.

I was in awe of her glorious tattoos and was keen to discover whether they were her own work. She replied graciously: “Thank you! I’ve actually never tattooed myself. I’m not sure that I ever will, the only place you can really tattoo comfortably on yourself is the tops of your thighs and those spots are reserved already.”

Cally-Jo revealed that her most meaningful tattoos were dedicated to her beloved grandmother. She said: “I have a portrait on my leg of my grandmother which I love of course. She was sick in hospital when I had it done and I showed up to surprise her after she’d had an operation. She hates tattoos but she was so thrilled.”

She added: “My grandmother means the world to me, so I wanted to have her put on me forever.”

Cally-Jo currently works between two of the most famous tattoo studios in the world; Love Hate and New Wave Tattoo that is run by the legendary Lal Hardy. She revealed that she has become particularly close to Lal Hardy and will always be grateful for all that he has done for her.

She said gratefully: He’s become one of my closest friends; he’s kind of like a father figure to me. I can’t ever thank him enough for the support he’s shown me.” 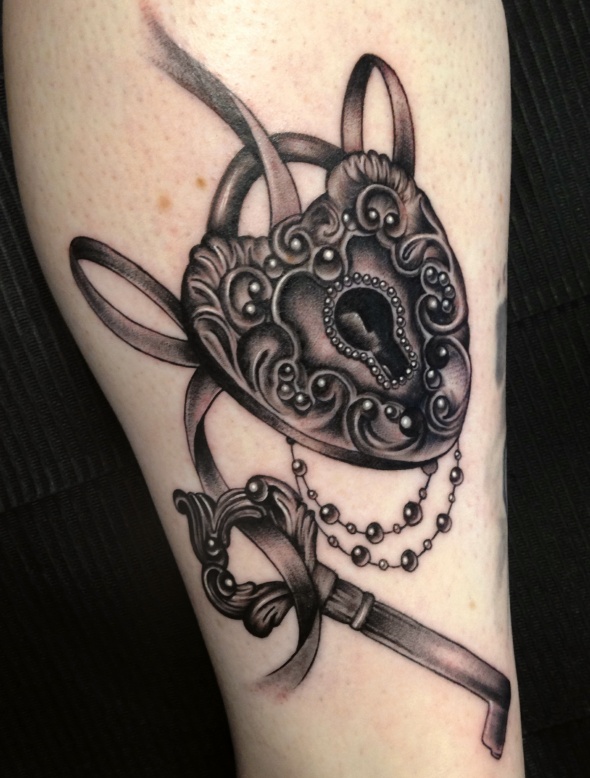 Cally-Jo has garnered a reputation as one of the most talented young tattooists in the industry and I wondered whether she had plans to open her own studio in the near future.

She replied warily: “I have thought about having a shop of my own in the distant future, but I’ve also seen some of the struggles and dramas of opening your own shop. I think for the moment I’d just like to put all of my focus on tattooing, making art and enjoying life.”

The tattoo culture has become a lot more socially acceptable in recent years. These days it seems to be more common for young people to have been tattooed than not. Although the stigma around getting tattoos has revolutionized, the stigma regarding the gender of the person orchestrating the tattoo isn’t fading away fast enough. The tattoo culture is still widely perceived as a male dominated industry, however talented female tattooists such as Cally-Jo are thankfully shattering the stereotype.

Cally-Jo agreed that the tattoo culture is still seen as a ‘man’s world’, although she assured me that there are many advantages to being a female tattoo artist.

She said: “It absolutely is, although the number of female artists is a lot higher now it’s still very much male dominated. I think that there are actually a lot of advantages to being a female in this industry. A lot of people are still intimidated by tattoo shops and would actually prefer to be tattooed by a female.”

Cally-Jo also revealed that she has experienced negative attitudes towards her in the past. She said frankly: “I’ve definitely experienced some negativity from male artists, perhaps it is jealousy, perhaps it is ignorance I’m not sure.”

She added: “I’m very happy working in the shops I’m at at the moment, I work with a mix of guys and girls and it’s very much a family environment. I find that being around males all the time only makes me want to work harder and prove myself.”

Cally-Jo is an inspiration to thousands of young people who admire her craft. I was eager to discover what advice she would give to aspiring tattoo artists.

She said frankly: “Tattooing isn’t really a profession I’d recommend anybody to get into if I’m brutally honest. I think that it has become far too easy for people to open shops or get an ‘apprenticeship’.”

She added: “Unless you’re a natural artist then this probably isn’t a good career choice. That being said, even some natural artists don’t necessarily transcend well into tattooing. Ultimately I think if I had to give any advice, it would be draw, listen, draw, watch and draw some more.” 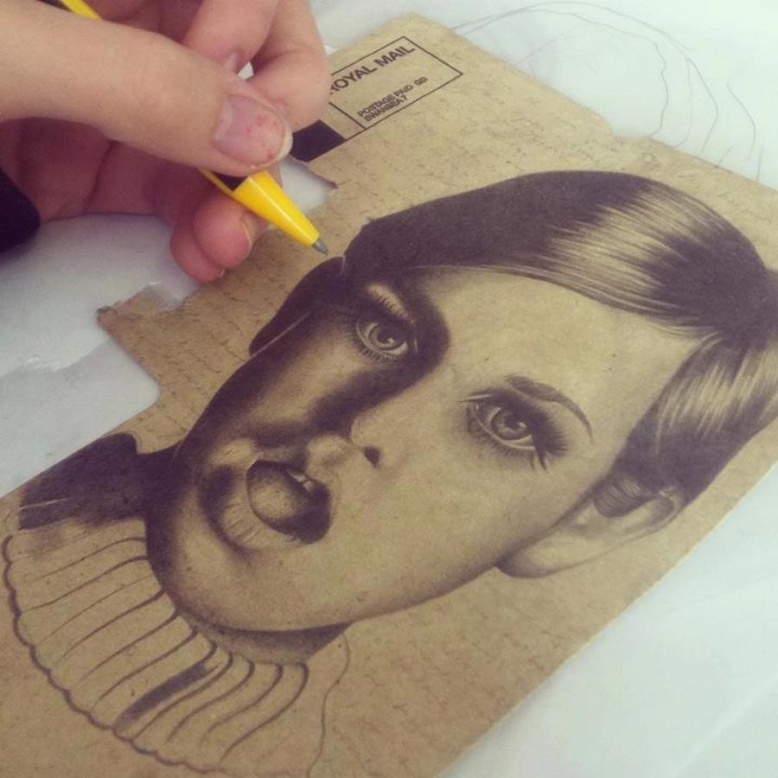 When she is not inking the skin of some of the most famous people in the world, Cally-Jo still finds time to focus on her artwork. She often posts beautiful illustrations of various subjects, from Twiggy in her heyday to poet Edgar Allan Poe. She often illustrates on discarded envelopes using a mechanical pencil. Her attention to detail is staggering, and the end result is so polished that it is hard to believe that Cally-Jo created them by hand using just a pencil and an old envelope.

There is no denying that Cally-Jo has the kind of talent that most could only dream of. She has the ability to create something so ethereal and make it look effortless. She struck me as an incredibly humble, creative and gracious woman who is grateful for every opportunity and eager to continue perfecting her craft.
I have no doubt that Cally-Jo’s work will take her to many luxurious countries and she will meet many famous faces. Whether it is with her trusty mechanical pencil or with a needle and ink, she will still be the girl with the magical gift to create beauty with such ease.

An archeaologist and dig for gold and mummies in Egypt.

I’d go straight to Thailand and hang out with some elephants. Then I think I’d hop over to Cambodia and see the temples of Angkor Wat. Then maybe pop over Brazil and check out Iguazu Falls.

This year had a little bit of a rocky start but I think that by the end of the year I’ll be able to answer that question for you.

City and Colour – As much as I ever could

My mum. I grew up with a lot of foster kids, we never got to hang out for a whole day.

Drawing or doing emails, pretty much every night of the week.

Just being remembered would be pretty special.