I was absentmindedly scrolling through Instragram one afternoon, when an illustration of Disney’s Snow White flashed on to my screen.

Snow White played a monumental part in my childhood, I watched the film so many times that the garish brown tape of the VHS eventually escaped and unraveled like ribbons. So, you can imagine the waves of nostalgia and sheer delight that washed over me when I set my eye on this high-fashion adaptation.

Snow White’s porcelain skin was illuminated by rose blush that accentuated her razor-sharp cheekbones. She wore an incandescent yellow gown with navy blue accents and the most glorious sparkling red cape with a luxurious snow fur trim. The look was completed by a glossy red bow that nestled neatly in her raven curls. One hand sat on her hip in an elegant yet undeniably defiant manner, whilst the other clutched the infamous shiny red apple. To put it simply, the illustration was absolutely breathtaking.

It was a beautiful yet fleeting trip down memory lane. To my delight, I would later discover that the illustration was one of many equally exquisite designs from the ‘Disney Divas’ collection by fashion illustrator and design extraordinaire Hayden Williams. Hayden has been drawing since he was 3-years-old, he revealed that Disney had also played a fundamental part in his childhood and had always been a strong source of inspiration for him. He said that the first character he ever drew was Disney’s Cinderella. He said nostalgically: “I grew up on Disney movies and the female characters were my initial source of inspiration to draw. I would draw them over and over until I got them spot on! I was fascinated by the magic and beauty of it all. I always credit Disney for serving as such a strong inspiration and influence in what I do.”

Hayden’s extraordinary designs also tend to be inspired by vintage fashion editorials and films. With undeniable passion, he exclaimed: “I love the 40’s, the late 50’s and early 60’s because women dressed so impeccably and with such class. I tend to incorporate those classic elements and what made them so timeless looking and try to translate it to my work.”

He added: “The combination of vintage and modern can be very powerful when done right. I also get inspiration from Pop Culture and things that happen in the media or music.”

Hayden’s illustrations are always undoubtedly so polished that it is hard to believe that they could have been achieved with a simple pencil. However Hayden assured me that this is usually the case, he revealed that his toolkit usually consists of just a pencil, fine liner and sometimes markers to add colour. He added: “A lot of people are surprised that I do things old school and do everything by hand. I think an illustration is much more interesting looking with less Photoshop. I love that iconic designers such as Oscar de la Renta and Karl Lagerfeld still hand sketch everything.”

Hayden revealed that it can take as little as 10-15 minutes to do a quick sketch, however one of his fully completed masterpieces with colour can take around one hour. He said: “I am a very fast worker and once I have an idea or vision in my head, I can translate it pretty quickly and in one take.”

My heart ached with envy; Hayden made the process of creating something so outstanding seem so effortless. However he later revealed that his attitude was not due to being at complete ease with process but with years of hard work and discipline.

I was astounded to learn that Hayden is also a predominantly self-taught illustrator. Such dedication to a craft is a rarity, especially with no educational background and to the incredibly high-level of work that Hayden produces. Hayden thanked me profusely, he added frankly: “It is something I am proud of because I didn’t really have to do much. It just naturally progressed the more frequently I would draw something. It feels like I have been doing this forever.” 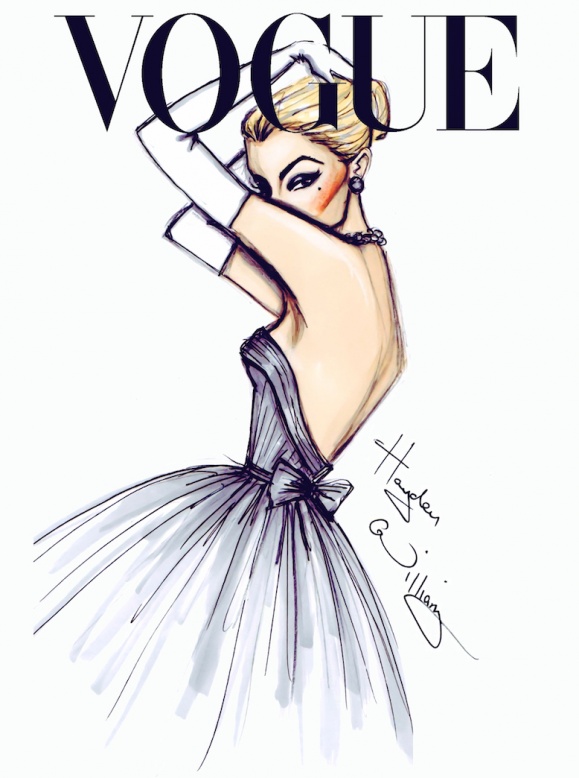 As Hayden was self-taught, I wondered whether he believed that illustration could be taught as simply a great skill or whether there was a natural gift involved. Hayden pondered: “Anyone can pick up a pencil and draw something, or learn to become better at it, but it’s how you translate your vision and ideas that can make it truly something jaw dropping, inspirational or potentially iconic. Some have more of a natural gift! It’s all in the delivery!”

Although Hayden had no formal illustrative training, he did go to college and then university to study fashion design. He said: “I wanted to learn the basics of sewing, constructing garments etc, so that I would understand it and also be able to call myself a designer.”

Hayden’s plan is to further his skillset by pursuing a career as a fashion designer. He said: “The plan for the future is to have my own high end fashion label, so I felt it was important to have that basic knowledge.” 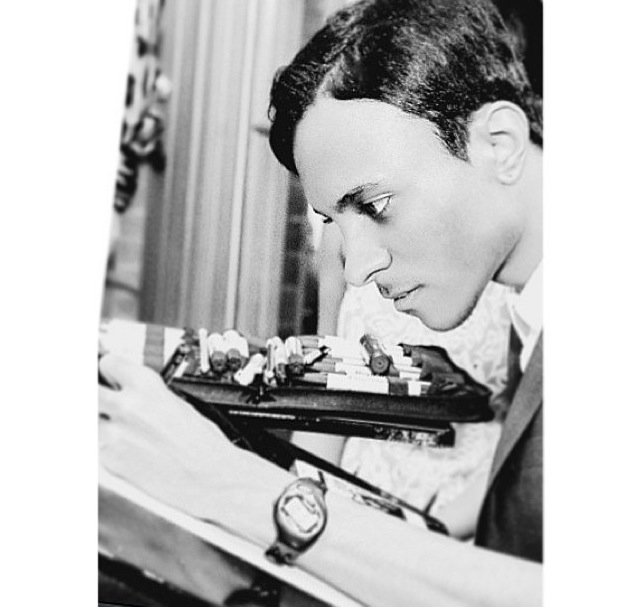 Hayden revealed that although it would be impossible for him to choose one particular favourite from his extensive body of work, women and womenswear is his favourite subject to design and illustrate. He said: “It is something that I think comes very naturally to me. My work seems to resonate with women and they always anticipate the next illustration as I think my work serves as fashion inspiration. Almost like an escape to a Hayden Williams fashion fantasy world.”

He added: “I always want to portray women in a positive way that is strong, sexy and confident but sophisticated and classic too. Those elements make up the Hayden Williams woman and design aesthetic.”

Hayden clearly has skills that would take the best of us years to obtain and a vision that it would be impossible to emulate but I wondered whether he had any advice for the tortured amateur artist that is inside so many of us.

Hayden pondered: “I am still growing and learning myself in many ways, but I would say to do it because you genuinely love it. Always be consistent with your craft. The more you draw, the better you will become!”

Thoughtfully, he added: “Use social media to your advantage to share your work. The likes of Twitter, Facebook, Instagram, Pinterest and Tumblr have all been such a great platform for me to share my vision. Marketing yourself once you have found your vision is very important. Lastly, when success comes, always remain humble!” 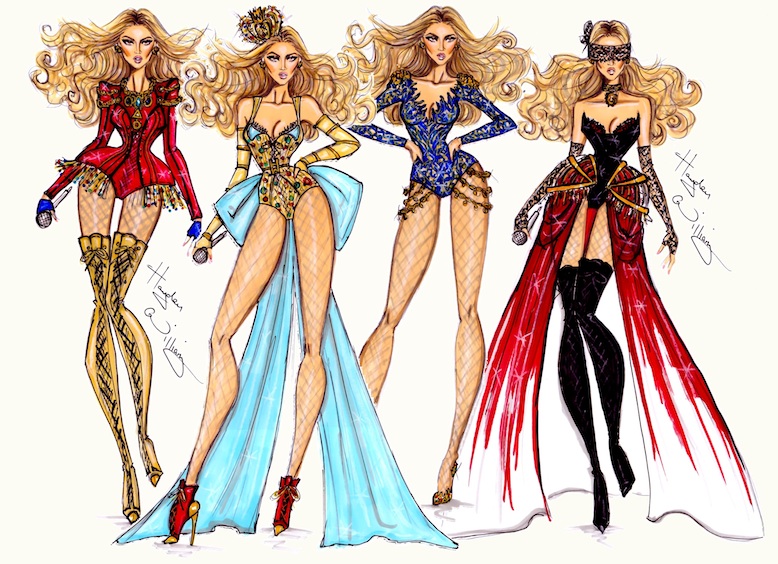 At just 22-years-old Hayden has achieved more than some people twice his age could ever dream of. I am one of many that appreciate Hayden’s extraordinary talent. He has collected a vast following, which includes over 500,000 fans on Instagram, fashion powerhouses such as Net-a-Porter and Vogue and even pop culture icons including Oprah, Beyonce and Naomi Campbell.

It is a dazzling level of success for someone so young but Hayden remains utterly gracious about his position. 2013 was a phenomenal year for Hayden, aside from being celebrated by his hundreds of thousands of followers and some of the most revered personalities in the world, he added being published in Harper’s Bazaar Austrailia and collaborating with Elle Thailand to extensive list of achievements.

Hayden is still not content and anxious and excited in equal measure to see what opportunities 2014 will bring, he said: “2014 is here now and already some amazing things are happening! Some very cool projects that I have been working on from last year will come out this year and I look forward to the many other opportunities that are coming my way.”

He added: ‘It’s crazy how far I have come since 2009 when I first started sharing my work online. It’s even crazier that I even get recognised and asked for photos when I go out now too! I never want to become complacent, I always want to work harder, become greater and strive for more.” 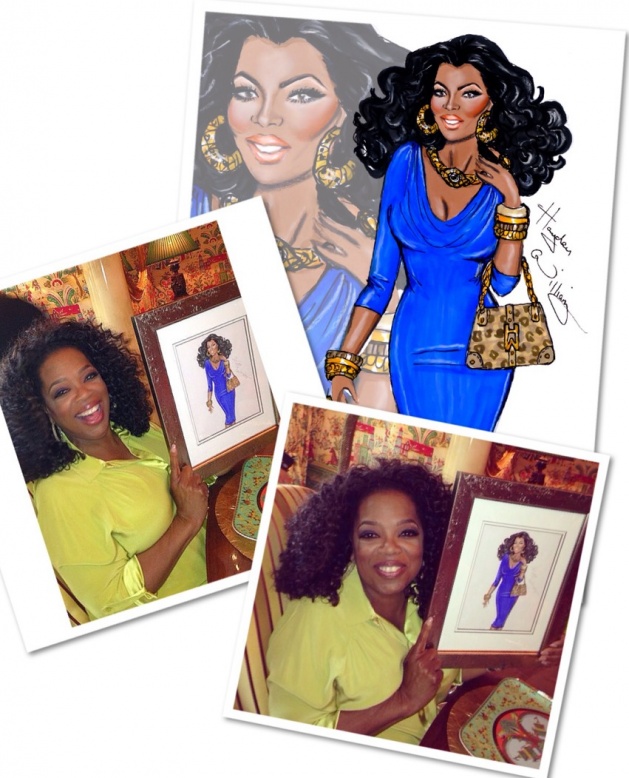 Aside from his undeniable talents as a phenomenal designer and illustrator, Hayden struck me as a sweet natured, eloquent and gracious man with a fierce determination to perfect his craft and continue to fuel his success. I would expect nothing more from someone who creates such beauty with ease.

Hayden Williams and his trusty pencil know how to create a beauty and it is nothing more than the sheer genius of a true visionary. Above all, I commend the fact that he is making the world a more beautiful place, one sketch at a time.