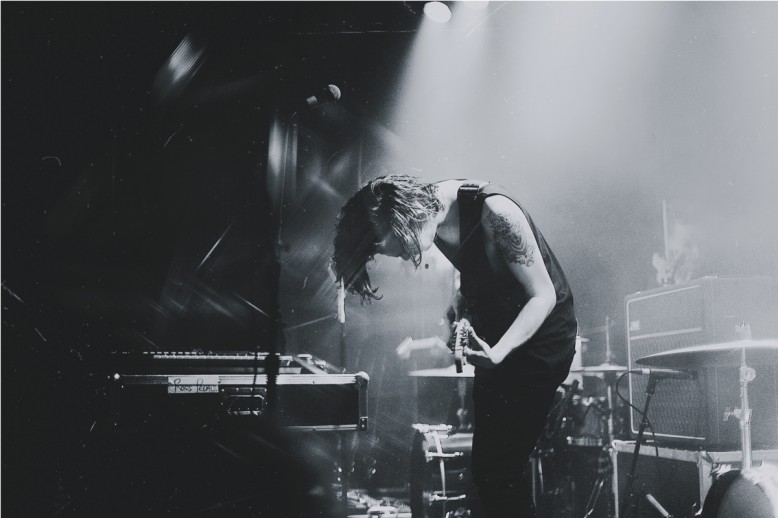 VIP areas at music venues tend to be full of industry types who have seen so many gigs, that they rarely bother to get up from the plush leather sofas. However, at Brixton academy on Friday night, this was definitely not the case. The leather sofas were abandoned as dozens of noses pressed against the windows of the viewing gallery, eagerly awaiting the arrival of The 1975.

The 1975 certainly know how to put on a show. They are so much more than a band, they are visionaries and this was perfectly demonstrated even before a guitar had been strum or a note had been sung.

Every detail aesthetically was clearly carefully constructed. As the band took their positions on the deliciously dark stage, a line of rectangles lit up with fierce white light behind them. The rectangles illuminated the stage, hanging gloriously behind the band whilst clouds of pure white smoke billowed on to the stage. Aesthetically it was simplistic but undeniably ethereal. The simplicity of the rectangles seem to symbolize an unspoken power, they signified everything and nothing at all, at the same time.

The 1975 arrived in style. Frontman Matty sauntered onto the stage dressed head-to-toe in black, followed by the rest of the band who were dressed similarly with monochrome assents. The band opened with one of their most popular tracks ‘The City’, the rectangles flickered in time with the song and the end result was utterly intoxicating.

Throughout the evening, it became apparent that Matty had an incredible rapor with the crowd, often venturing towards the front of the stage and addressing them directly. On one such occasion, Matty stood on the edge precariously and said in his melodious voice: “How you feeling London? Are we ready?”

We were more than ready, and the crowd responded with a thunderous roar of agreement.

It was clear that the crowd adored the band, to be fair they were mesmerising. Hundreds of pairs of eyes followed Matty’s body as he ripped off his black jumper, to reveal a simple black vest underneath. This was followed by hundreds of wolf whistles and wild screams from the crowd.

The band performed a selection of hits from their self-titled debut album that shot to number one earlier this year. A particular highlight was the glorious and provacative ‘Sex’. As he sang, Matty ran his hands through his floppy raven mane, to the delight of the crowd.

The performance of the whimsical ‘Heart Out’ was particularly notable, Matty sung with such passion and intimacy that if felt as though he were singing just to you.

A personal favourite was the highly emotive ‘Is There Somebody That Can Watch You’. The song is said to be written for Matty’s younger brother Louis as a sort of comfort and consolidation due to Matty being away on tour a lot.

As the song came to a close, a man standing behind me ruffled the hair of young boy affectionately. He said: “Wow Louis, your brother is incredible.” The young boy smiled proudly, looking down at his elder brother. It was a truly beautiful moment that I feel privileged to have witnessed.

On another occasion Matty thanked the crowd profusely for their continued support that has seen the band sell-out three nights at Brixton Academy, a rarity for a band that is still relatively new on the scene.

Matty leaned into the crowd and immediately created an intimate feel. In a near whisper, he looked around the vast auditorium and said in awe: “Here we are and here you are.”

Prior to the gig Matty had tweeted: ‘In the days that follow – the 1975 will be performing a show that’s intention is the instant undoing and amelioration of your heart.’

I can safely say that Matty was true to his word; my heart was utterly undone and ameliorated that night.