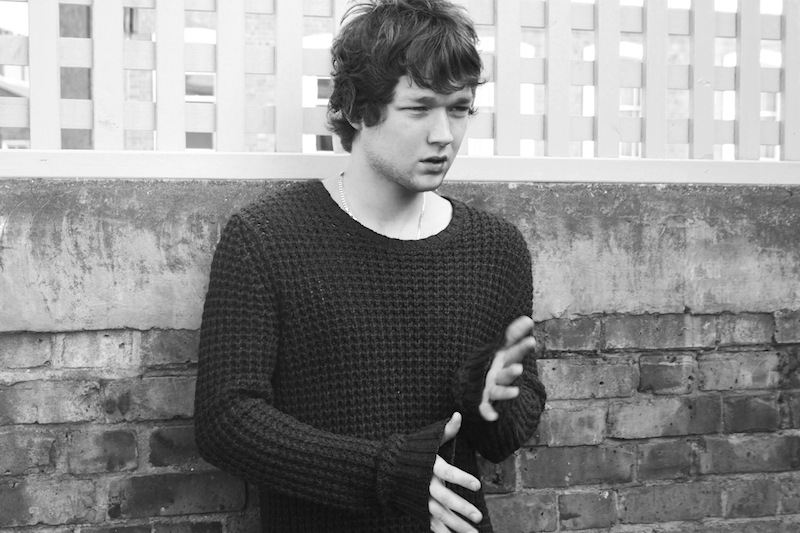 As I walked into The Canonbury I immediately locked eyes with Louis Dunford. He was early and sat alone in a booth, nursing an untouched Kopparberg cider. He was instantly recognizable from his mass of soft brown curls and stood up to greet us in a courteous fashion.

After we had exchanged pleasantries, Louis looked at me uncertainly. He placed his palms together and said softly, his voice laced with doubt: “I am not sure if this will be any good, I don’t think I have anything particularly interesting to say.”

That was Louis all over; considerate, warm and brutally honest, he immediately won us over and couldn’t be further from boring.

After we had ordered a round of drinks, Louis revealed how extraordinary the last few weeks had been for him. He usually spends his time working as a part-time waiter and singing and songwriter in his spare time. However, in the last few weeks everything has gone into overdrive. Louis’ spare time has been filled with back-to-back meetings with some of the most influential movers and shakers in the music industry, all keen to get involved in Louis’ extraordinary talent.

Louis has also had the kind of break that most up-and-coming musicians dream of, in the form of SBTV founder, self-made millionaire and businessman Jamal Edwards.

Jamal was introduced to Louis’ music through YouTube and quickly organized one of his legendary A64 sessions at Louis’ family home in Islington.

As he recalled the session, he shook his head in disbelief and said: “Do you know something fucking mental? I am so oblivious to the world that I didn’t even know who Jamal or SBTV was! When I told people he was coming to my gaff they went crazy, but I honestly didn’t realize how much of a big deal it was!”

He added, laughing softly: “That sounds so silly, now that I know how amazing Jamal is. The best bit is that he is a truly lovely person and so humble. He turned up at my house with his camera and we just recorded a session, it was all really relaxed.”

Since Louis’ A64 session was uploaded to SBTV’s YouTube channel it has received thousands of views and Louis has gained many new fans including rapper Professor Green. He has been yanked from obscurity and is on the fringe of mainstream success and to be perfectly honest, he is completely overwhelmed by it all.

He smiled and said: “It is fucking crazy. I will always be grateful for everything Jamal has done for me, I still can’t get my head around everything that is happening.”

The most extraordinary thing is that Louis hasn’t even really tried to break into the music industry yet. He hasn’t started gigging or even released an EP, yet his fan base is already forming and there is a real buzz building behind this troubadour.

The buzz is most definitely well deserved. The first time I was shown Louis’ most recognizable track ‘We Are Hooligans’, I was completely blown away by his signature cockney yet melodic voice, refreshingly honest lyrics and impressive guitar skills. Although there is no denying that Louis is extraordinarily talented, his real skill lies in his songwriting. It is often crude, hilarious but always brutally honest. There is no doubt that his songs about growing up on the streets of London, define the childhoods of a generation.

Louis revealed that his songwriting derives from his love of language, reading and vivid imagination. He drummed his long slim fingers on the table and said: “I have always been a big reader and had a really vivid imagination as a kid. From reading extensively, I became fascinated with poetry.”

When Louis was 15-years-old, he moved into his current home and found to his delight that the previous owners had left a piano behind. He recalled nostalgically: “I had never played an instrument before but I taught myself how to play the piano. I sort of put these melodies together and wrote poetry in my spare time. One day I had an epiphany, it all came together and I began writing songs.”

Louis patted the pocket of his pea coat and said: “I always carrying a writing book with me and write in it constantly. I’m just so fascinated with language, if I hear a word that I don’t understand, I’ll research it and see how I can use it in a sentence.”

Louis’ songwriting has got him in to trouble in the past, people he knows tend to hear his lyrics and interpret them as being written by them. Louis laughed aloud and clasped his hands together tightly, he said: “Everyone knows what I write about. Sometimes people take my writing so personally but I would never purposely single anyone out or try to embarrass anyone.”

He smiled mischievously, and added: “My songs are full of arseholes. I know a lot of them, in fact sometimes I am one of them.”

Louis revealed that he counts legendary musicians such as Morrissey, Jimi Hendrix and The Rolling Stones as his heroes. Frankly, he said: “You have to write about what you know. Morrissey wrote about how shit life was in Manchester in the 1980s and that resonated with me. My life isn’t shit by any means but it can definitely be difficult, especially in London.”

As he spoke, he tilted his head to one side and locked eyes with me once again, clearly speaking straight from the heart. He added: “My songwriting is based on observation, I draw inspiration from the people around me, the kind of people that make up our generation. It is never a personal attack on anyone and I would hate for people to perceive it that way. I try to make it light-hearted so that it doesn’t hurt anyone’s feelings but at the end of the day its my life, its what I have seen and heard and done. Make of that what you will.”

I wanted to be an actor so I play all my dreams. One day I could be a cowboy, the next I could be an astronaut.

Don’t be so afraid of education! Just chill out, SATS and GCSE’s aren’t such a big deal. I used to take myself so seriously as a kid, so I would have told myself to just calm the fuck down.

I am seriously the biggest atheist in the world but if it turns out that I am wrong, I would pop up the Heaven and have a look around. To be fair, I would have pop down to Hell too and have a peek.

Aside from SBTV, I have had some really crazy, out of this world meetings this week. Meetings with people I wouldn’t dream that I would sit down with. I can’t say much else at the moment but trust me, it is very exciting.

Leon with Natalie Portman and Gary Oldman. I first watched it when I was just 10-years-old, that is fucking bad isn’t it?

Bohemian Rhapsody – Queen! That song fascinates me,  every time I hear it, it gives me shivers! It makes me feel nostalgic because it made me want to start a relationship with music.

My nan, she isn’t with us anymore so I would love to spend a day with her.

Hopefully in bed with a book!

Smoking! I gave it up a while back but I am craving it all the time. I am ashamed to say that I don’t think my relationship with cigarettes is over.