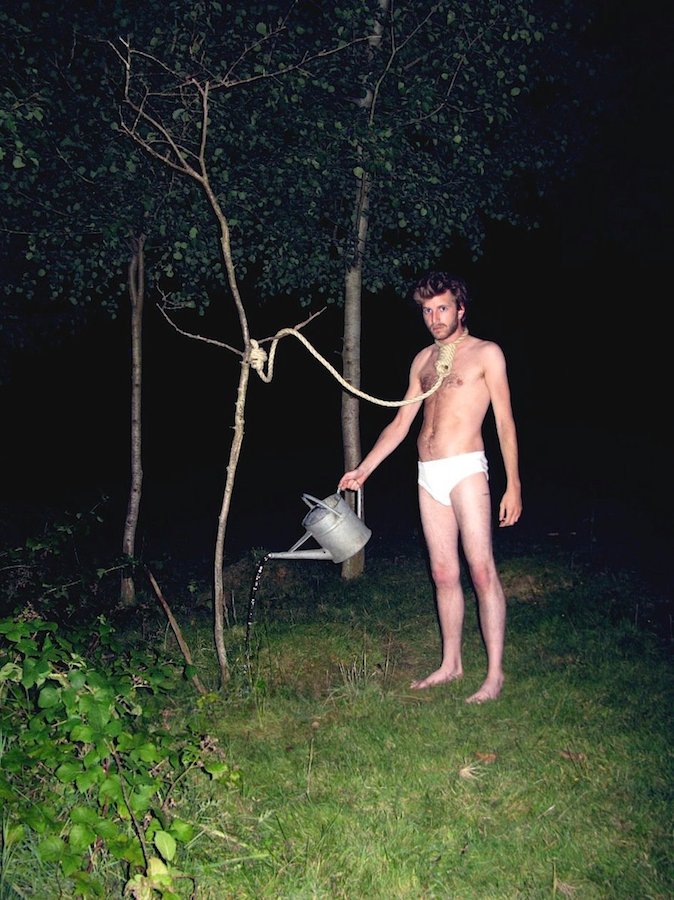 The first time I was introduced to Hayden Kays’ artwork, I burst out laughing. It was one of those intense laughs, the kind that catch you completely off-guard and escape your lips before you can stop it. This was not the kind of reaction that one might expect when viewing a piece of art, but what I saw was so fiercely witty that I simply couldn’t help myself.

The source of my amusement was Hayden’s iconic piece ‘Art Dealer’, which is a seemingly blood splattered canvas, emblazoned with ‘Please don’t tell my mum I make art, she thinks Im a drug dealer’. 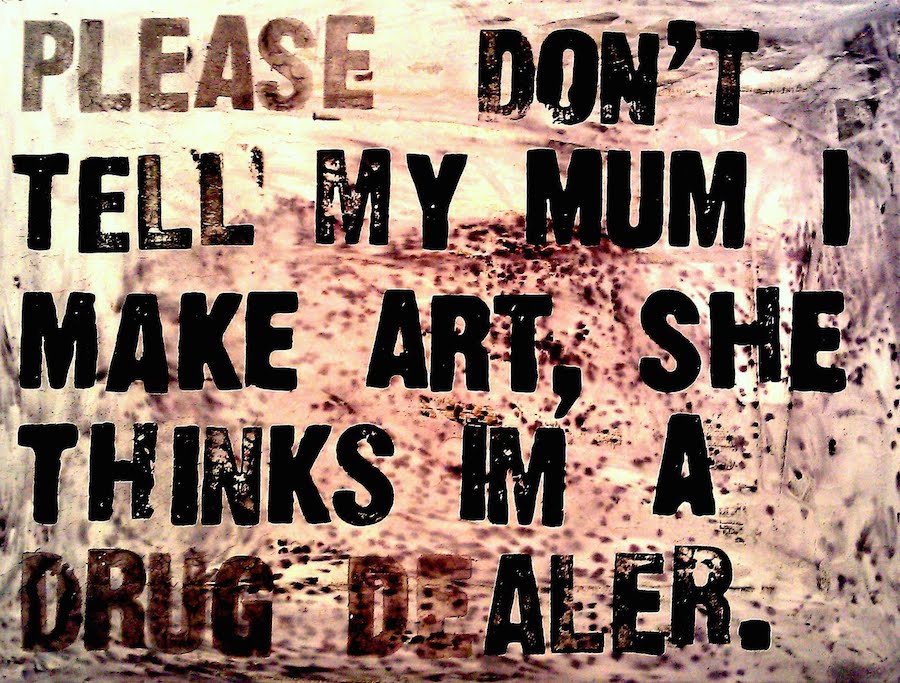 Prior to that, I had always considered my appreciation of art to be firmly pigeonholed in the Pre-Raphaelites era. For a moment, Hayden’s work took me stratospherically out of my comfort zone and my limited perception of art. He had opened my mind to a multitude of possibilities and I was eager to see more of his work.

Hayden is a triple-threat; he is an accomplished painter, sculptor and printmaker, but more importantly, he is provocative, an anarchist and a maverick. Hayden’s work is a window to his soul; he uses it to deliver powerful messages in a way that has often been perceived as obscene.

However, it would be ridiculous to suggest that Hayden’s work features these images solely for shock value. The images can usually be translated as messages, with reference to current issues that are featuring heavily in the news or on the lips of the public.

Hayden’s work has shattered all of the unspoken rules of art and crossed into an array of areas; fusing fashion, music and politics into electrifying, occasionally erotically charged and often emotionally fuelled wonderland. 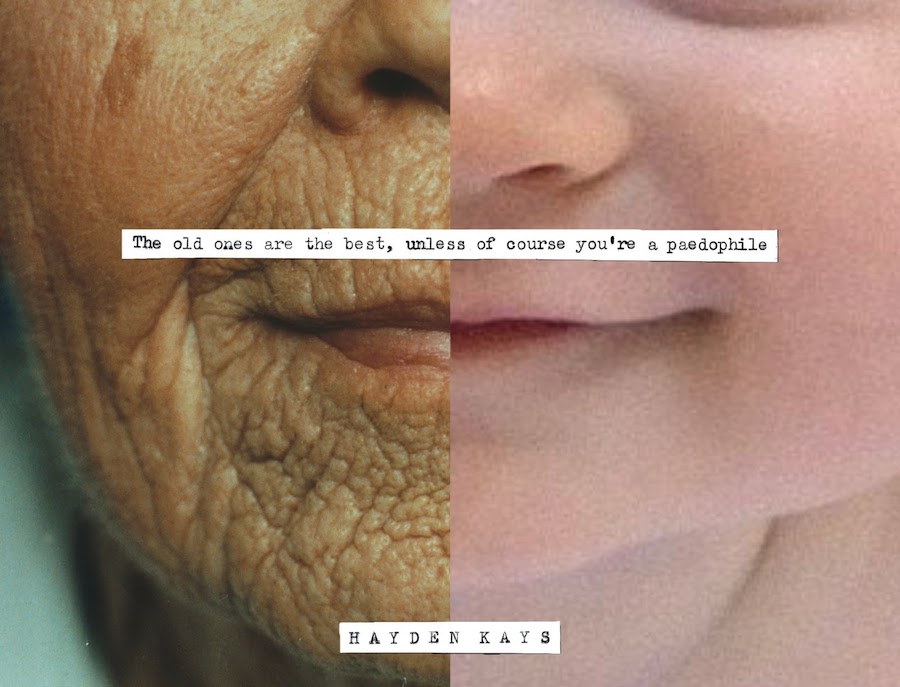 One of Hayden Kays’ most controversial pieces is ‘You’ve Got To Feel Old To Know What Feeling Young Is’. A piece that shows the mouths of a baby and an elderly person along with the sentence, ‘The old ones are the best, unless of course you are a paedophile’.

Truer words were never spoken, try and argue with that, I dare you. Hayden told me a spine-chilling anecdote that immediately put the entire subject into context.

He said: “I see things everyday that I think could be deemed more controversial. I recently saw a drunk man attempt to stamp a rat to death while his sober friend wrestled him away.”

He elaborated: “A group of people including me, stood by screaming “No! No! No! Stop it!” and the rat hobbled off to perish in agony. The drunk protested to his friend that he shouldn’t have held him back. I witnessed the imminent death of the rat and of the friendship.” 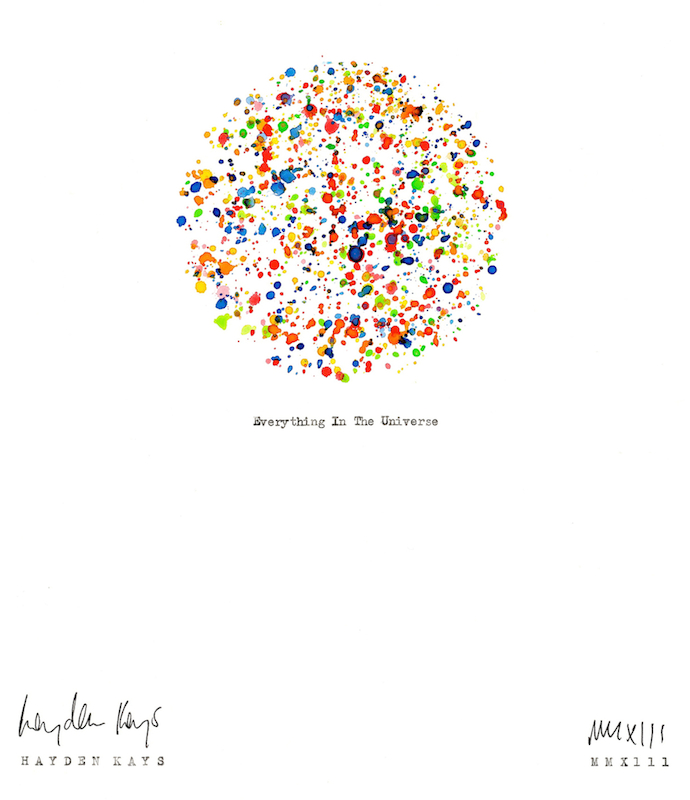 It is undeniable that Hayden uses words provocatively in his work; he toes the line precariously between the comical and the obscene. However, I have always found his use of words to be witty, thought-provoking and occasionally beautiful.

A perfect example of this is the way Hayden described his first kiss. For many of us, our first kiss may have been in a playground accompanied by the soundtrack of children screeching. Picture this, two pairs of sticky Ribena-stained lips, pressed together for a brief but glorious moment.

Hayden has somehow managed to make his first kiss sound like something out of a fairytale. He said: “My first kiss was spectacular. I’m convinced that if you were able to magnify my eyes, you would discover, hidden behind the veils of my eyelids, fireworks that matched the explosions in my ears and vivid gushing of my blood. The most perfect kiss of my life.”

Whilst we were taking a trip down memory lane, Hayden revealed that his favourite piece from his collection is ‘Cold Turkey’. A piece that was initially meant to be light-hearted but once it was finished, Hayden was reminded of Rachel Whitear, a British 21-year-old that died tragically of a heroin overdose in 2000. He said: “The image has totally changed for me now. It went from being floaty and jokey to being heavy and tragic all in the puff of a second.”

Hayden revealed that he has loved creating since childhood. He said: “The alchemy of creation is the greatest thing I’ve ever discovered.”

Hayden nostalgically recalled that the first piece of art he ever made was a hand-drawn traditional fruit bowl when he was five-years-old. He said: “I woke up really early one Saturday morning and the television wasn’t broadcasting yet. In those days they turned off at night. As I couldn’t watch cartoons, I decided to draw my own. I think I chose a fruit bowl as it enabled me to use all the colours.” 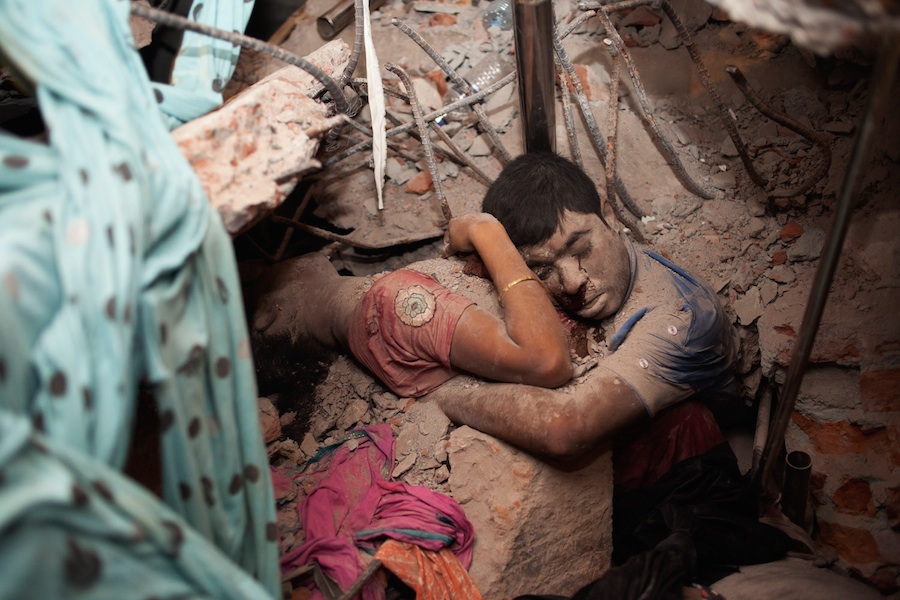 Last year, the clothing factory collapse in Bangladesh touched the hearts of the entire world and Hayden was no exception. It was here that he discovered his favourite piece of art. It is a poignant photograph, taken by Bangladeshi photographer, Taslima Akhter, of two dead victims embracing amongst the rubble. Speaking of the photograph, Hayden said: “Nature created one off the strongest images I’ve seen in a long time. It’s the most perfect balance of love and death.”

What struck me most about Hayden was the way he answered each question so frankly and sincerely. He seems to wear his heart completely on his sleeve, which was incredibly refreshing.

Celebrated artist, Joseph Minton once said: “Art captures emotions, feelings and the energy of the object or event that is being depicted. It goes far deeper than the cold, flat surface of duplication.”

There are a number of emotionally charged themes that dominate Hayden’s work, from the purest love to the deepest hate. I was keen to discover Hayden’s perception of these themes.

Hayden’s work is often humorous, in a dark and provocative way. I asked him what made him laugh and he replied solemnly: “The things that nearly make me cry.” 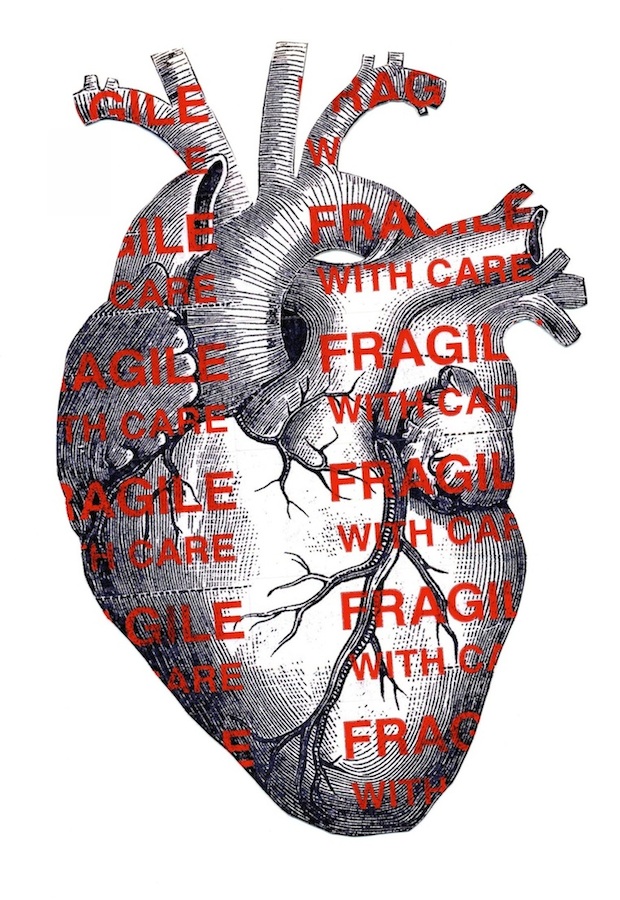 Both human and romantically illustrated hearts are incorporated in many of Hayden’s most popular works, such as ‘Handle with Care’. There is sentimentality to many of these pieces, such as one that reads ‘ I Will Love You Until The Cold Runs Hot.’

On the subject of love, Hayden simply said: “Everything that happens, happens because of love.”

Hayden has his critics but predominantly his work is widely celebrated. He has achieved a phenomenal level of success, which includes being crowned as ‘one of a new generation of Pop artists’ by The Independent. He also collaborated with Johnny Lloyd of the Tribes, designing the artwork for Lloyd’s debut novella ‘A Journey Through the Heart of a Pig’. He has also exhibited his work at the Saatchi Gallery during Frieze week, alongside Damien Hirst and David Bailey.

Recently, he has designed the artwork for The Kooks’ highly anticipated new single ‘Down’, after mutual friend Johnny Lloyd introduced frontman Luke Pritchard to his work. Speaking of the introduction, Hayden simply said: “Alchemy at work!”

He has also gathered a selection of celebrity fans, such as the whimsical Noel Fielding and Harry Styles from One Direction. 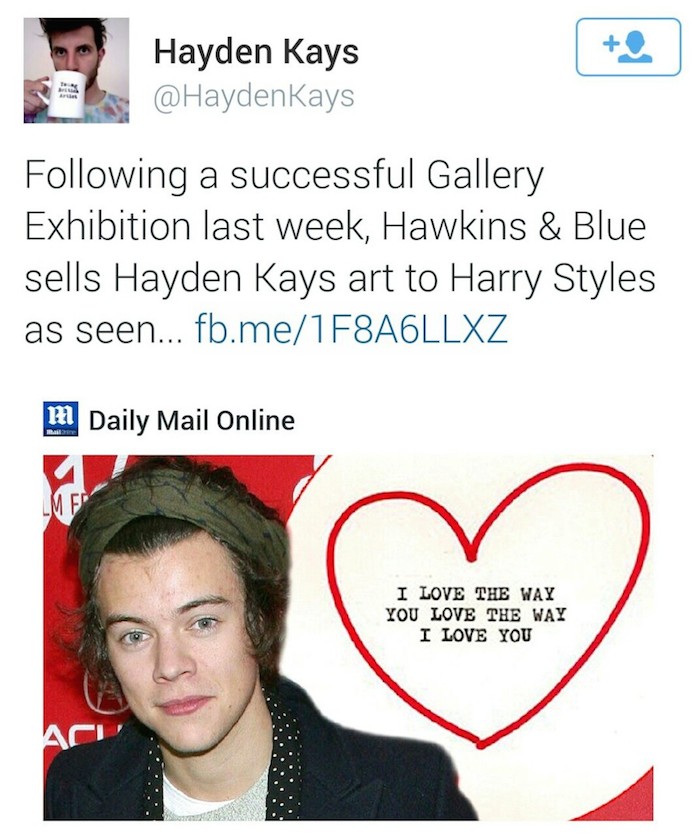 In fact Styles has collected a number of Hayden’s works over the years. Recently, it was reported that he paid £20,000 for a series of provocative and sexually-charged original works by Hayden. His purchases included pieces emblazoned with phrases such as ‘If I wasn’t straight I’d definitely be gay’ and ‘I think about sex every sex words.’

I asked Hayden how it felt to have one of the biggest pop stars in the world as a fan. He said: “I’m keen to impress my contemporaries, so it’s lovely that such a high profile member of my generation is a fan.”

There is no denying that Hayden Kays is not everyone’s cup of tea but nor is he trying to be. He takes pleasure in being anti-establishment and mocking the modern world. He is a visionary, who has opened new artistic and cultural boundaries with his work. Hayden does not allow people’s perception of art to cloud his vision. He does not hesitate to let his heart spill out onto a canvas, without fear of judgment. It is that sense of freedom and knowing of ones self, which is truly admirable.