Miles Aldridge: I Only Want You to Love Me I stood outside of the entrance of fashion photographer Miles Aldridge’s highly-anticipated exhibition and took a moment to admire the fluorescent pink letters emblazoned on the doubles doors. It was at that moment, I knew that it would be an experience quite different from the many other exhibitions I had visited before.

Miles Aldridge: I Only Want You to Love Me is a captivating adventure through the kaleidoscopic eyes of an avant-garde photographer. What makes Aldridge’s work so enthralling is his ability to incorporate in every photograph, the whimsical mind of a child, the experimental nature of a teenager and the complexity of an adult who has seen it all and done it all.

I Only Want You to Love Me is without a doubt a paradox. On the surface, it is a series of vibrant and beautiful photographs of elegant and ethereal women, however, if you look a little closer, you will see that each photograph is a labyrinth. Behind the obvious beauty and the overwhelming use of bright colours, the scene is almost always catastrophic. 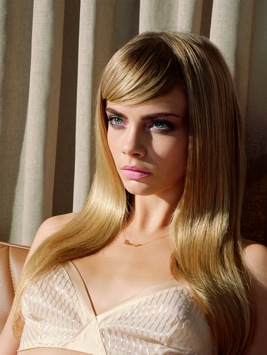 Aldridge’s attitude towards women is undeniably complex. The immaculately turned out women featured in his work are stunning, however there is also a sense that they are fragile, an enchanting disaster waiting to happen. These women are hyper-materialistic and hyper-sexualised; imagine Stepford Wives on acid.

In an interview with The Cut earlier this year Aldridge explained the contrasts in his work. He said:

“You know, unsettling is what I’m interested in. I look at fashion magazines and they tell me that the world is filled with beautiful women. I read the newspapers, and they tell me the world is such horribleness, sadness, and strangeness, and mostly bad things, right? So my work is really a discussion of the two contrary premises. I want to set a sort of unsettling message. But my trick is to sugarcoat it in these bright colors.”

Aldridge also cited his mother as the inspiration behind his work. He said:

“The women in my book are quite closely associated with my mother. My mother was a victim of the divorce, and it was quite unpleasant, and she was left alone after that. And she never really picked herself up, unfortunately. And she died, that was probably twenty years after the divorce. She was really an image for me of someone who was asking these bloody questions, asking “How the fuck did I get here?” I think she’d be happy to know that what she went through is also remembered and it’s part of the human experience. And I wanted to share that in my work — people respond to it. They don’t need to know the background, but people respond to the elements of melancholy and unease.”

The day that I visited the exhibition, London was in the midst of a heat wave that was suffocating yet thrilling in almost equal measure. The cool air conditioning in the Embankment Galleries East, South Wing of Somerset House provided immediate comfort from the scorching streets of London on a Thursday afternoon. However, interestingly enough the final part of the I Only Want You to Love Me exhibition, provided more solace than a machine ever could. There is a deep purple velvet bench located in a dimly lit alcove at the end of the exhibition. It is here that one of the most miraculous photographs I have ever laid eyes on was waiting patiently to be seen. I won’t ruin it for you by saying much else but this photograph was so extraordinary, that I sat on that very bench for over an hour just lost in the beauty of it.

See, that is the thing with Miles Aldridge, he is a man who is full of surprises.

Miles Aldridge: I Only Want You to Love Me

Entry is £6, however concessions are £4.50 and it is £3 on Mondays (excluding Bank Holidays)