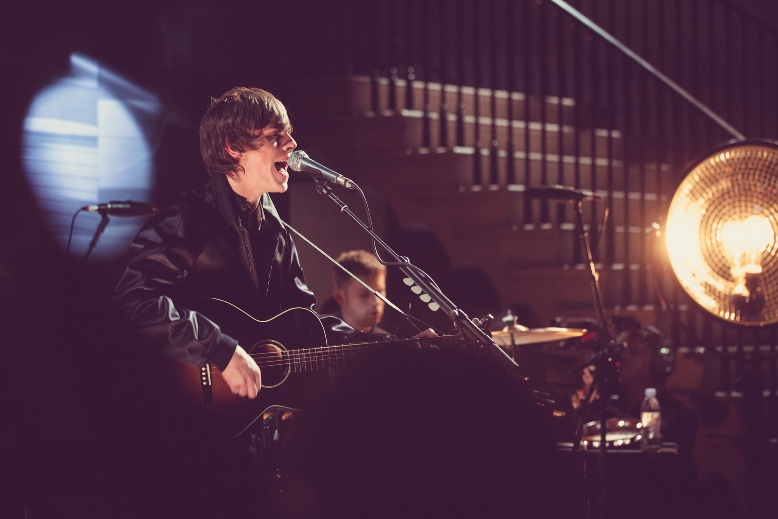 It is a Thursday afternoon and I am slumped into a sumptuously deep sofa in a comfortable corner of The Old Queen’s Head pub in Islington.

The interior exceeds what is expected of a traditional North London pub. There are beautiful ornate mirrors decorating the walls and an imposing yet enchanting fireplace. A pair of captivating chandeliers hang from the ceiling, one is made of antlers and the other of glittering gramophone speakers. The latter of these particularly decorative light fixtures gives a clue as to why I and dozens of others are packed into this pub on a random afternoon.

The crowd is far from eclectic, mostly young girls fill the pub, all chattering excitedly amongst themselves. The crowd is made up of mostly competition winners who have won the opportunity to see Jake Bugg perform.

As a longtime fan of Jake, I feel butterflies flitting around my stomach as we await for the man himself to arrive. It is not everyday that you get to see one of your musical heroes, up close and personal in such an intimate setting.

Then suddenly, dressed in a black leather jacket, Jake Bugg casually saunters onto the small stage. Behind a mop of endearing brown hair, he nostalgically informs us that this pub was the first London venue that he ever played.

He launches into a selection of heart-meltingly beautiful songs that have not only earned him critical acclaim but also a Q award this year for Best New Act and a nomination for the Mercury Prize 2013.

There are no gimmicks, Jake doesn’t need any distractions. His incredible vocals and impressive guitar skills immediately blow the crowd away.

Jake played tracks from his phenomenally successful self-titled debut album and his much anticipated second record, Shangri La which will be released in November.

A highlight was definitely a gentle acoustic rendition of ‘Pine Trees’, one of his newer tracks. It was a powerful and mesmerising track that reminded me of Don Maclean’s early work.

Jake listened carefully to the crowds requests and performed some of his most popular tracks to the delight of his fans. The soft acoustic ‘Country Song’ and the infectious ‘Seen It All’ enthralled us all. As did the man himself, with his sultry voice, nimble fingers and shy glances at the audience. Jake melted a number of hearts that afternoon and mine was no exception.

Jake closed the gig with arguably his most popular track ‘Lightning Bolt’ and to his delight, the audience hung on to his every word.

I am sure that I speak for others as well as myself when I say that I did not want the gig to end. Luckily, for us the end was not as near as we thought. Jake rewarded the crowd by taking the time to come out and take photographs for whoever wanted one. He was warm and sweet and engaged with everyone that approached him.

After Jake had left, the crowd dispersed and we stepped out into the Autumn sunlight. I, like many others felt privileged to spent the afternoon in the company of such a beautiful and talented musician.