The Bulgari Hotel has secured one of the most exclusive pieces of real estate in London. It is located in the heart of Knightsbridge, a stones throw from Harrods and opposite One Hyde Park, a residential complex that is home to the world’s most expensive apartment (it recently sold for £140m). With such iconic neighbours, my expectations for The Bulgari hotel were sky-high.

The taxi driver pulled up outside the hotel’s glittering façade, to my right was a line of perfectly valet-parked supercars. They came in a rainbow of colours that glistened under the smoke grey clouds that filled the sky. They looked like a row of exquisite jewels; from the ruby red Ferrari 458 Italia to the glittering gold Lamborghini Aventador and the pearly white Bentley GT3-R, its engine purring, waiting for its owner to return.

The doorman anticipated our arrival and swept the door to the hotel open before my colleague Stephanie and I had the chance to put our feet on the pavement. I walked into the lobby and was in immediate awe of its beauty. There were vases that were taller than I am, dotted around the room and overflowing with fresh white flowers. A large circular bar stood pride of place in the center of the vast space. As I walked past, the barman smiled and said cheerfully: “Welcome, I hope you enjoy your time with us.”

The Bulgari hotel is clearly the place to see and be seen. The lobby was bustling with beautiful people; two dapper gentlemen in tailored suits were sat at one table sharing a bottle of wine. A group of four women were sipping cocktails, dressed exquisitely in furs; the sound of their laughter filled the air as we passed them.

We descended to one of the lowest floors of the hotel, as the lift doors opened we were greeted by the spa’s receptionist. The reception area was quiet, comfortably warm and the sweet hypnotic smell of jasmine filled the air. After the receptionist had checked us in, we were given a tour of the extensive spa area. 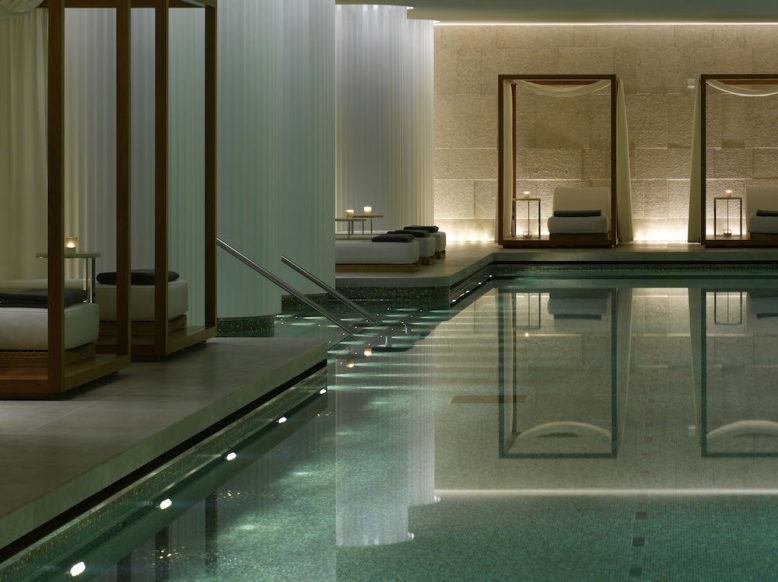 The area was not so much of a spa, more a centre of luxury, calm and revitalization. For starters, it houses a full gymnasium and physical training centre with on-site personal training team, 11 single spa treatment rooms and 1 private spa suite. It is also home to a colossal 25 metre, three-lane swimming pool, which is without doubt the most impressive in the entire city.

We were shown to the changing rooms, which resembled old Hollywood dressing rooms. Light bulbs framed the mirrors and the floor-to-ceiling lockers were made of a luxurious dark wood. We locked our valuables away by inputting a code into the electronic keypad. We slipped into the luxurious cloudlike grey bathrobes and slippers that had been provided.

We ventured back into the reception area as instructed, where we were greeted by name by two masseuse’s. We were shown to a private treatment room, which exuded tranquility. It was lit solely by candlelight and the hypnotic smell of frankincense filled the air. Catherine, my masseuse instructed that I remove my robe and put on a pair of disposable underwear. She patiently waited outside whilst I followed her instructions. 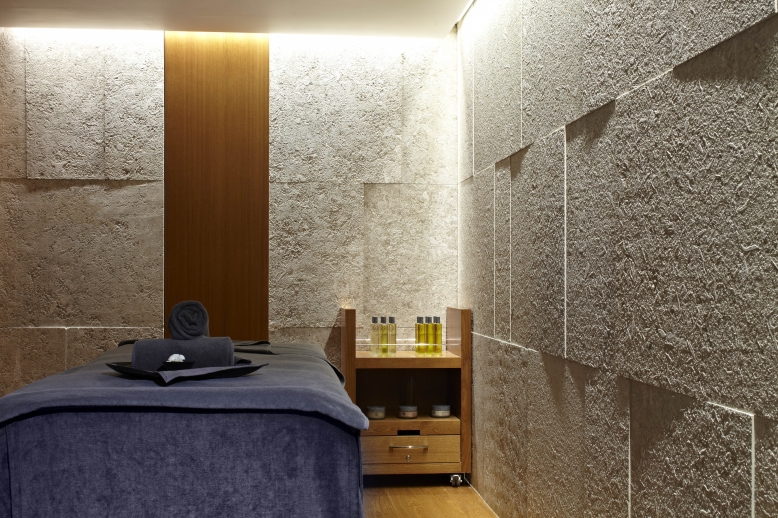 After a short while, Catherine reentered the room. In almost a whisper, she asked what kind of massage I would like and whether there was any part of my body I would like special attention paid to. I explained to her that I can often be found hunched over my MacBook for hours on end and that my shoulders ached after a long day. She listened intently and assured me that she would devise a tailored massage especially for me. She reeled off a list of oils and I chose the re-energizing rose and peppermint. I left the rest in her capable hands and lay on the massage table, completely and utterly at her mercy.

Suddenly my senses were clouded; the intoxicating smell of rose filled my nostrils as warm steam was applied to my face. My ears were filled with the soothing music that was drifting out of speakers. If that wasn’t enough, as Catherine peeled the towel from my body, she said softly: “Don’t worry about a thing, we’ll take good care of you today.” Now, that was music to my ears.

The next sixty minutes were some of the most luxurious and relaxing of my entire life. As Catherine’s warm, smooth hands ran along the curve of my bare back, I felt all my tensions melt away. Those magical hands worked almost every inch of my body; from my neck to the soles of my feet. Catherine even massaged each of my fingers and toes individually, paying special attention to the palms of my hands.

I always thought that I would fall asleep during a massage but the sensations were so incredible that I didn’t want to miss a single second. Far too quickly for my liking, Catherine pulled the towel gently up to my neck and informed me that my session was over. My heart sunk.

She told me that there was no rush and that I could get up in my own time. She then stepped outside whilst I put my robe back on in the dark room, with only the golden glow emanating from the candles for light. 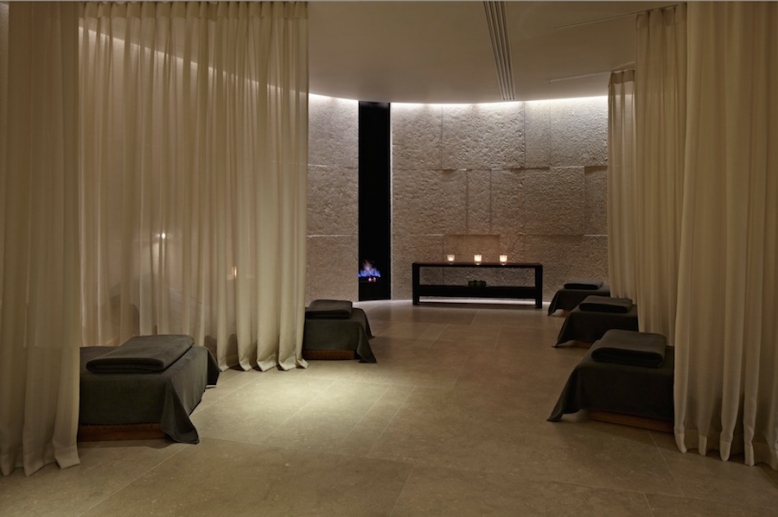 I examined my skin, which smelt of sweet roses and glowed golden from the luxurious oils. Once I was ready, I ventured out into the corridor where Catherine had been waiting. She placed her warm hand on the small of my back and guided me towards the relaxation room. Luckily she did so, as my legs had pretty much turned to jelly.

The relaxation room was the epitome of tranquility. A dozen beds were shrouded in floor-to-ceiling white opaque curtains for privacy. A luxurious vertical fireplace roared in the corner; gold and blue flames licking one another. As I sat on one of the glorious beds, Catherine brought me a bottle of chilled coconut water. I thanked her profusely for such an incredible experience and she left me to relax in peace. 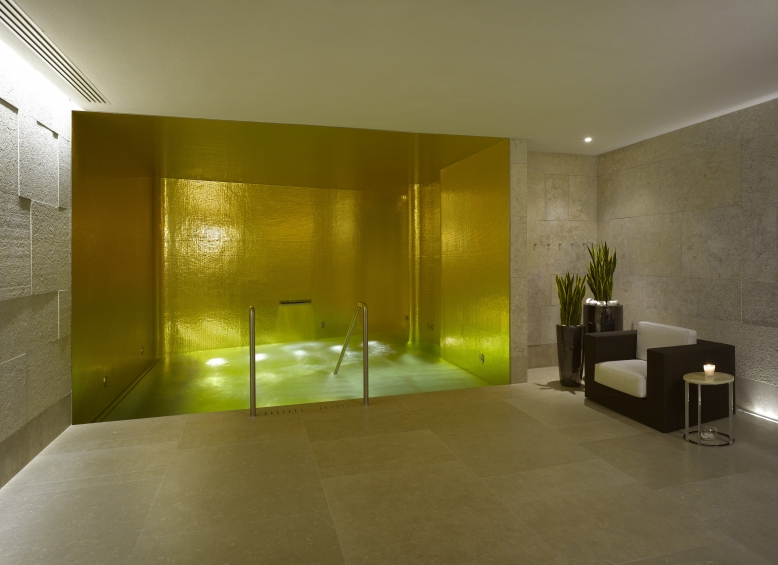 After a while, I dragged myself out of the relaxation room and made my way to the pool area. I was left quite literally speechless by its beauty. The Bulgari hotel is home to one of the most extravagant private pool areas in the city. It is clad in textured Vicenza stone and extravagant white cabanas and loungers flank the colossal pool. The lighting was soothing and aromatic candles burned around the room. The azure water was warm and inviting, I slipped into one of the lanes and felt the sparkling water envelope my body.

A few lengths, I retreated to the Bulgari hotel’s crown jewel; the vitality pool. The pool features a variety of full body massage jets. There are discreet seats in the pool, so you can sit in the hot bubbling water and really lose yourself. The vitality pool is decorated with thousands of glittering gold leaf glass tiles that pay homage to the glorious Byzantine mosaics of Venice. Although the Bulgari hotel spa is in the heart of the city, it is a world away from the bustling streets above. It is the epitome of elegance and unapologetic extravagance. The hotel already has locations in Milan and Bali but will soon be opening hotels in Shanghai (2016), Beijing (2017) and Dubai (2018). This is hardly surprising as with such phenomenal service and luxury beyond your wildest dreams, world domination is imminent.