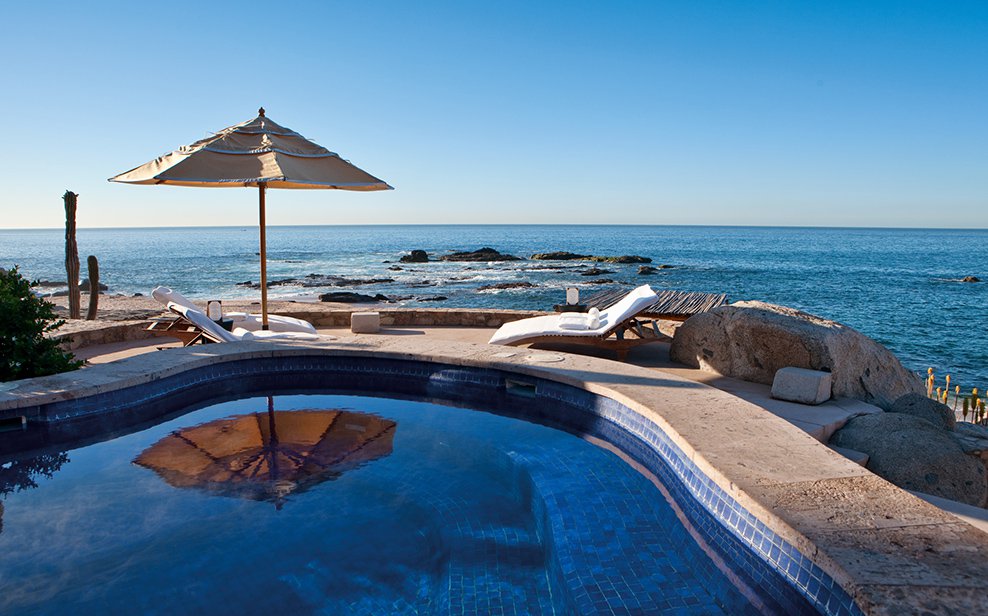 I walked out of Cabo San Lucas airport and couldn’t help but smile. The sun beat down on my bare shoulders as I scanned the vast crowd of people; their faces alight with excitement as they waited for loved ones.

Amongst the sea of faces, I spotted my name on a large board. It was held up by a man who wore a sharp black suit and a smile that stretched from ear to ear. He shook my hand warmly, immediately took my luggage and led me purposefully through the crowd that parted like the red sea.

A sleek black Mercedes SUV was parked, in one of the few shady spots in the vast car park. The driver swung the door of the car open and gestured for me to get inside and out of the relentless sun. He rushed to turn the air conditioning on as I sunk gratefully into the cool black leather seats.

He put the luggage in the boot of the car and reappeared moments later with a care package. It was a wooden box filled with a chilled white lemon-scented towel to refresh my hands and face, a local newspaper, a bottle of water and a packet of yellow macaroons tied neatly with a gold ribbon. 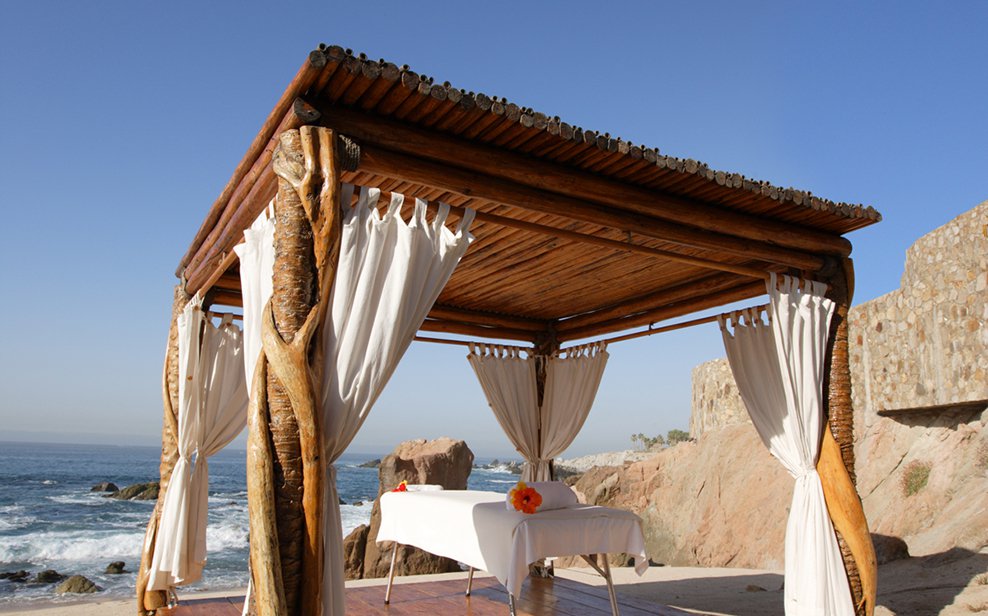 During the 20-minute journey to the hotel, the driver and I discussed everything from the best places to go in Cabo away from the tourist trail to the way the area has transformed since his childhood.

Soon enough, we approached the gates of Esperanza. We passed through the security gates, the driver turned to me and said: “You know President Obama and Beyoncé? They’ve both stayed here recently. Only the best of the best come to Esperanza.”

The driveway was surprising long and decorated with lush greenery and exotic flowers in rainbow of colours on either side. As we pulled into the courtyard, I got a breathtaking view of the sapphire ocean beyond.

Laura, our personal concierge was awaiting our arrival. A waiter, who was carrying a tray laden with green and blue ramekins, accompanied her. He smiled and offered my partner and I a ramekin, he explained that it was a coconut tequila ice. As we sipped the refreshing drink, he smiled and said: “welcome home”. 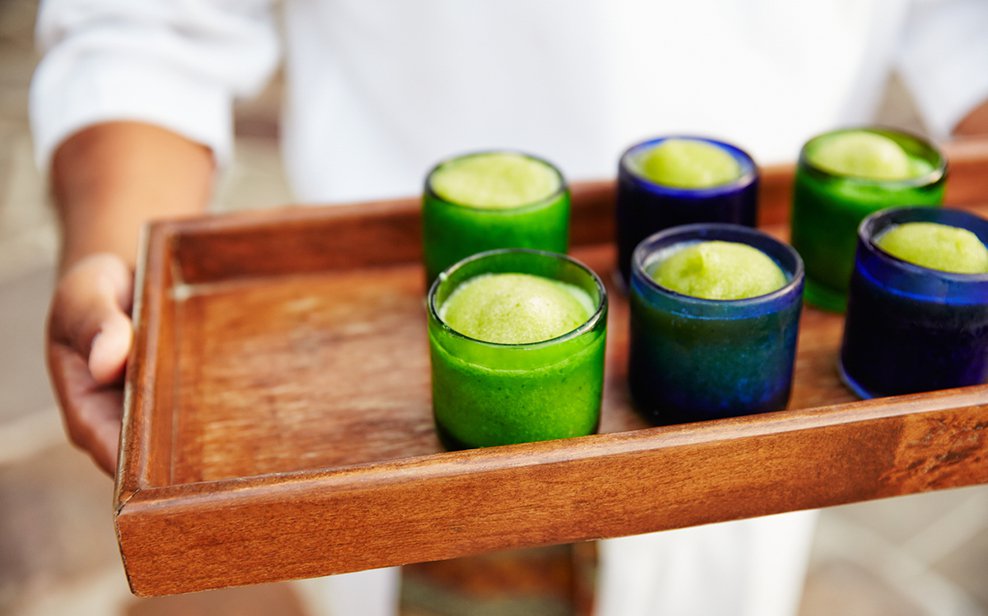 In September 2014, Hurricane Odile, a category four hurricane, hit Cabo. It caused mass devastation across the area, including a great portion of the Esperanza resort. It was the most severe tropical storm to hit the region in over 40 years. Luckily, there were no casualties as all guests, homeowners and staff were safely evacuated before the hurricane hit.

It was remarkable to see how quickly the area and Esperanza in particular had recovered from the tragedy. Laura gave us a tour of the breathtaking 17-acre resort and revealed how the natural disaster had affected the area. Despite the discreet rebuilding work that was going on, the resort was incredible and to the untrained eye, you would never have known that the hurricane had ever hit.

We were shown to our recently refurbished Ocean View Garden Casita, it was utterly breathtaking. It offered 925 sq ft of space and was decorated in classic soothing Baja style. It predominantly featured a palette of creams and dove greys.

It had a regal king-sized bed that was perched so high that I had to jump to get onto it. There was a number of plush daybeds and handcrafted furniture and accessories created by Mexican artisans.

The bathroom was also spectacular; it was designed as a wet room for two. There was a deep soaking tub as well as two side-by-side open showers and his and hers sinks, complete with vast Hollywood style mirrors with inbuilt lights. There was a separate toilet, with a door for privacy.

Just when I thought it couldn’t get better, I peeked out of the bathroom window and gasped. Just below was our own private outdoor infinity edge plunge pool.

I hurried outside on to the terrace, which had multiple seating areas, decorated with large cream cushions. There were seven large antique lanterns, they gently illuminating the azure waters that glimmered in the fading daylight. From the terrace, I had an extraordinary view of the swimming pool and the turquoise ocean beyond it.

Every evening was spent in the plunge pool. The balcony was shrouded in darkness, with the soft glow from the candles providing the only source of light. I would sit there with my partner, reading by candlelight or listening to the sound Cabo’s majestic waves crashing against the shore. 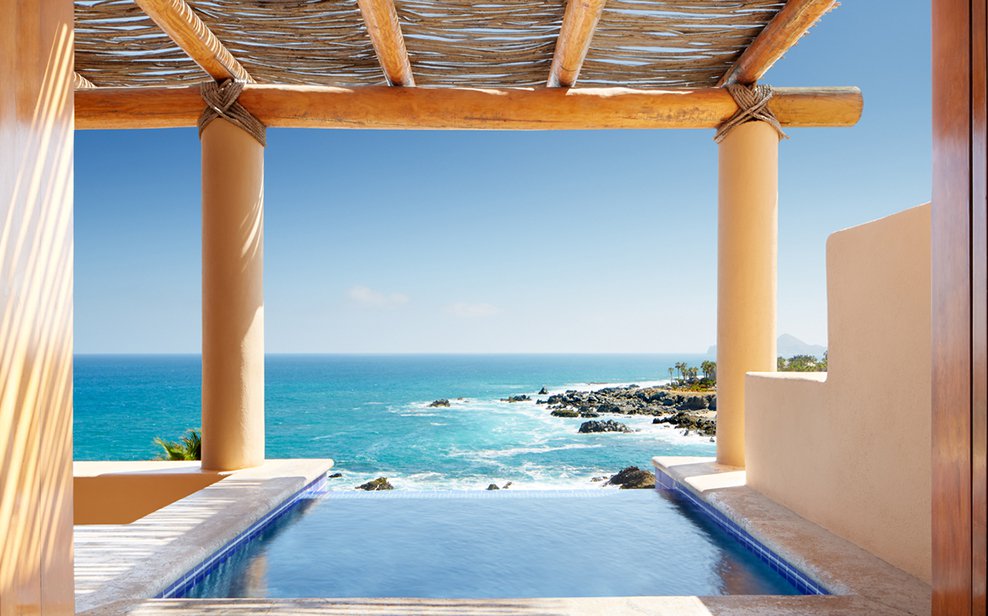 Esperanza’s crowning jewel is undoubtedly it’s double infinity pools. Palm trees, their leaves touching the cloudless sky, surround the two extraordinary pools. The only thing that seperates the pools from the sparking azure ocean is a strip of golden sand. From the pool area, all you can see is uninterrupted ocean views all the way to the horizon.

There are dozens of perfectly aligned white sun loungers, each with its own umbrella and cloud-like mattress. The mattress is covered in soft towelling and is changed immediately after a guest has left the pool area.

A waiter dressed in head-to-toe white, greeted me warmly and offered a sun lounger directly in the sun or one that was hidden under the forgiving shade of a palm tree. I chose the lounger under the palm tree and moments later he reappeared with an ice bucket filled with complimentary bottled mineral water which he replenished multiple times throughout the day.

The poolside service was unrivalled, with complimentary edible treats offered regularly, such as mint and mango slushies’, lemon ice-lollies and fresh fruit sushi. There was even a different frozen cocktail served daily; a personal favourite was the frozen margaritas that were refreshing yet intoxicating,

There was also a masseuse that offered complimentary head and shoulder massages from the comfort of your sun lounger.

The complimentary treats did not stop at the pool. Every evening after dinner, I would return to my room to find thoughtful amenities had been left during the turn down service. A highlight was fresh guacamole and salsa served with golden tortilla chips, rainbow macaroons and handmade jewel-like sweets hidden under an intricate and edible chocolate lid.

As part of the turn down service there was a different ‘recipe of the day’ card left on the bed, it featured the recipe for one of Esperanza’s signature dishes.

The staff at Esperanza are some of the most warm and attentive I have ever come across. They made sure that we wanted for nothing during our stay. Every possible whim was catered for. There was never a moment that I wasn’t greeted with a warm smile and staff took care to remember my name and greeted me personally. 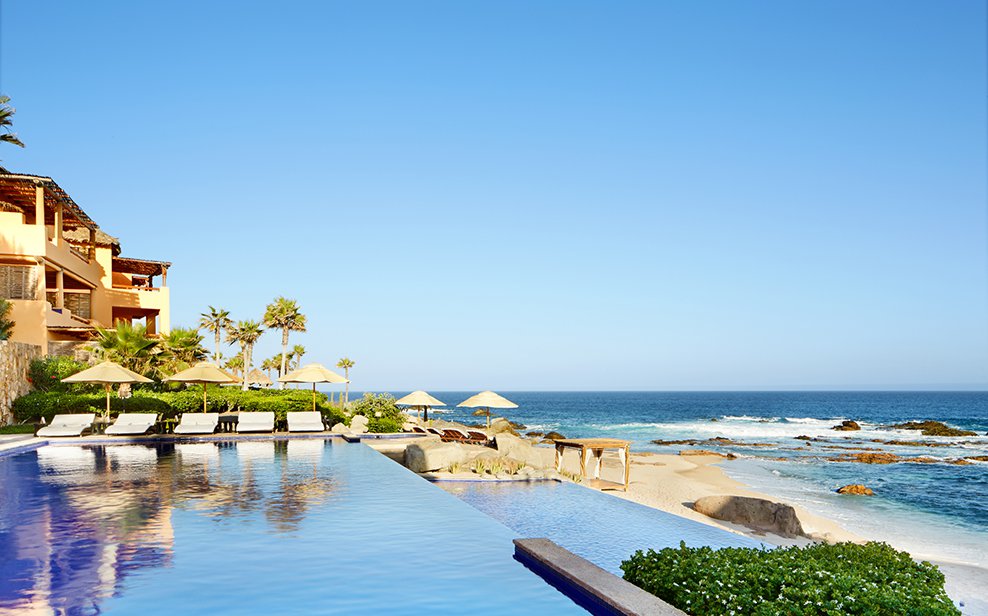 We ate at the resort every night. They offer fine dining and sea-to-table fare at Cocina del Mar as well as a more relaxed bar-style restaurant. They are both outdoors ofter diners the opportunity to eat under the stars.

Esperanza prides itself on showcasing ingredients from local farmers and fishermen and you can taste the outstanding quality with every bite. The food was fresh, authentic and delicious; the sea bass in particular was the best I had ever tasted.

The charismatic and rather handsome Executive Chef often greeted us. He would pop out of the kitchen to check we were satisfied with the food.

Esperanza also offer a private dinner on the beach, this was something we couldn’t resist. My partner and I walked down to the beach, not knowing what to expect.

On the golden sand was a table draped in a white tablecloth. There were two menus’ that had been specifically devised for us and even had our names printed on. Our concierge Laura had asked about our favourite foods and had created a signature menu.

We were served a phenomenal three-course meal, just a few footsteps from the ocean. After we ate, we moved on to a beanbag that had been discreetly place on the sand in front of a roaring fire. We drank champagne and watched the sky turn from pink to indigo. It had been one of the most beautiful evenings of our lives. 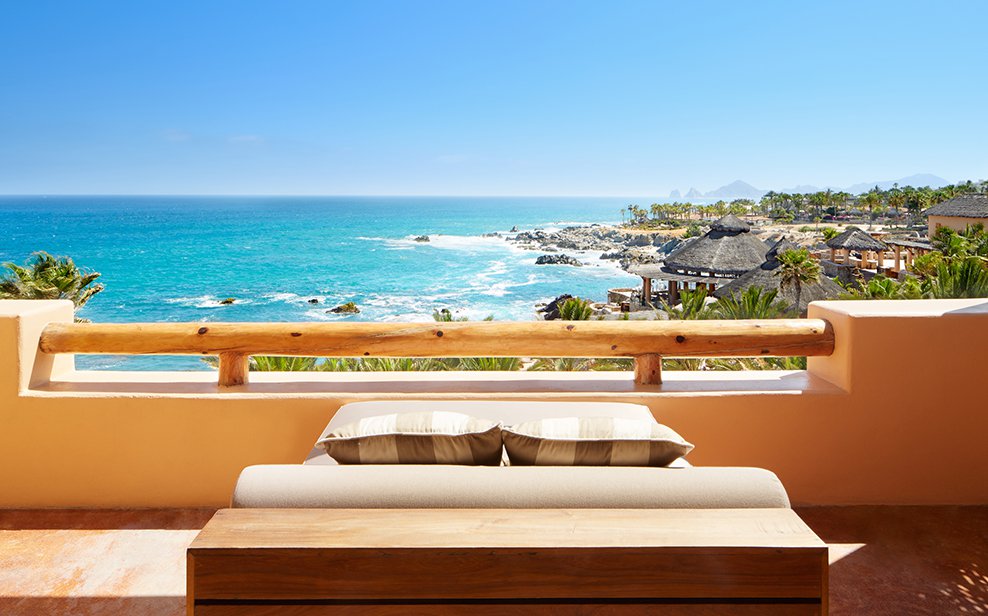 The entire stay at Esperanza had been faultless. The resort does not just fulfil expectations it exceeds them. It offers guest’s not only incredible luxury and outstanding service but also generosity, heart and soul.

On our last night, we sat in the plunge pool surrounded by candles; the flames flickered in the warm evening breeze. We had only each other, the sound of the waves and the stars in the black velvet sky above for company. Never in my life have I experienced such serenity.

Suddenly, the sky was ablaze with fireworks, red, pink and gold streaked across the inky sky as someone celebrated a wedding on Esperanza’s private beach. We wanted for absolutely nothing, expect to stay there for just one more night, then another and another. 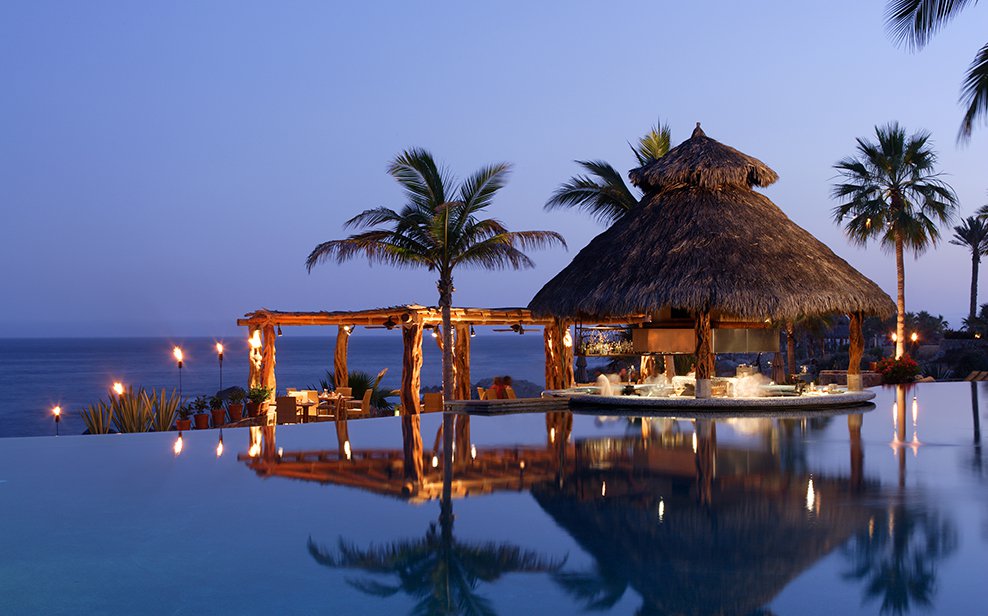