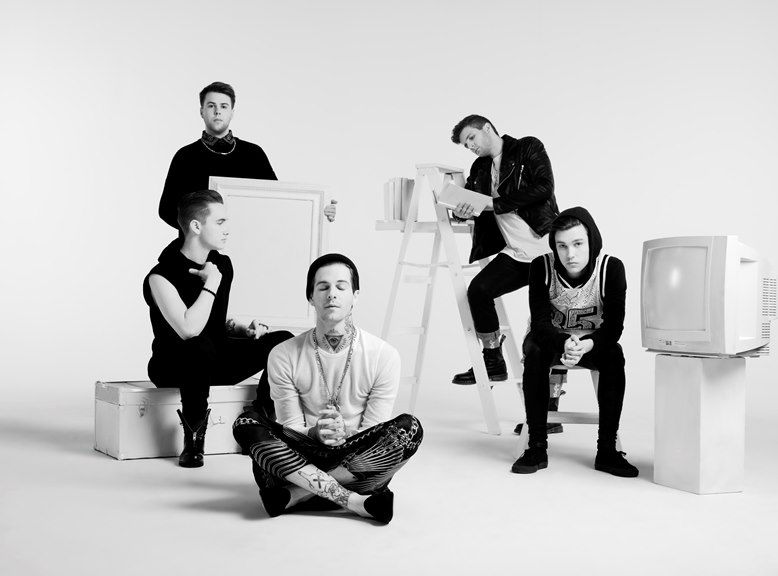 It was an absolutely perfect day in California, the heat beating down upon my bare shoulders, as I drove along the Pacific Coast Highway. As I followed the glorious winding roads towards Hollywood in my white Mustang; I was mesmerised by the azure waters that lapped the golden coastlines of Malibu to my right and the intimidating, but majestic mountains that towered over me on my left.

If in that moment, someone had asked me what unadulterated happiness was? That afternoon came as close to it as one could possibly be. I remained in my dreamlike state all the way into the city, until a sound snapped me out of my subconsciousness.

A radio station was playing a song of an inexplicable genre. The song was a perfect paradox; dark, but also with an undeniably ethereal element. A little too soon for my liking, the song ended and the dj announced that it was called ‘Sweater Weather’ by emerging alternative band The Neighbourhood. In that very second, I forgot about my idyllic surroundings and fell head over heels into what would be a longstanding love affair with the band.

When the opportunity to interview The Neighbourhood came about, I literally jumped at the chance. I was originally meant to meet with the band when I was in Los Angeles last summer, but due to unforeseen schedule issues, I had to settle with an interview via telephone.

I was told by the record company to expect a call from them at around 8pm on a Thursday evening. At precisely 8pm my iPhone buzzed and I was put through to Bryan Sammis, drummer boy extraordinaire from The Neighbourhood.

To be completely honest, of all of the band members I could have spoken to, I was secretly hoping that the interview would be with Bryan. His reputation for being slightly unorthodox peaked my interest. I had heard that he was a bit of a hedonist but also a genuine, warm and friendly guy. Before I could think too much about it, I was met with a friendly yet cut-class voice with the unmistakable hint of a New York accent, it said: “Hey Monicha, this is Bryan from The Neighbourhood.”

After we had exchanged pleasantries, Bryan asked where I was calling from. When I told him I was from London, he excitedly said: “No way, seriously? I literally called my dad in London earlier, he is there on business. That is a pretty crazy coincidence, I love your city.”

When I asked where Bryan was calling from, he said: “Fun fact! I’m in New York, and I am on top of a hotel right now. I am surrounded by the New York City skyline, I’ve been walking around on the roof and it is pretty crazy up here.”

I can honestly say that The Neighbourhood is a band like no other, they are the furthest thing from manufactured as it is possible to be. To be frank, they are the puppet masters and the music industry is their puppet. Of all the artists I have interviewed, The Neighbourhood have a spectacularly unusual amount of control of their brand, a rare feat for any artist in the modern age.

The last thing I want to do is put a dark cloud over the proceedings, but this is an intense time for the music industry. There is no denying that budgets are tight, the internet is precarious. As it can “make you” with social media, but also “break you” with piracy. This is a time when the music industry is unfortunately being held together by safety pins, however this also makes it all the more exciting when a completely original band like The Neighbourhood pops up out of obscurity.

A perfect example of this, was when Bryan was asked why The Neighbourhood have been such a resounding success. He said: “We care about everything. Everything we do is in black and white, because we care about that, it is important to us.”

Thoughtfully, he added: “We make all of our tour posters and we make our album art. All of our videos are made by two of our best friends, who are just as much a part of The Neighbourhood as we are. We take pride in literally every piece of content.” 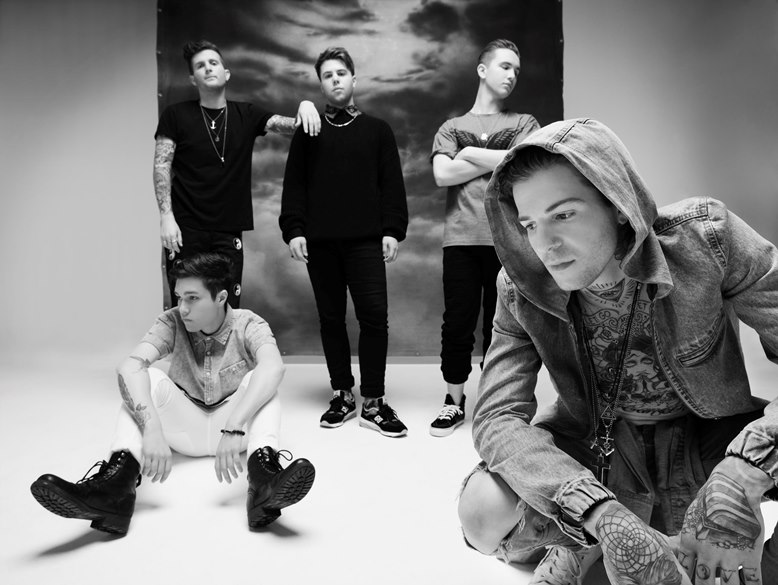 Since the release of their critically acclaimed debut album ‘I Love You’, The Neighbourhood have been constantly on the road. I asked Bryan what was on their rider? In retrospect I was expecting cigarettes and endless bottles of whiskey, but Bryan’s response took me by surprise. He laughed whimsically and said: “Oh wow, that is very good question. Honestly, there is a ton of fruit and organic products on there.”

Byran then gave me a glimpse into his rumoured hedonistic ways. He laughed mischievously and added: “Well, we try really hard to be healthy when we are on the road, but then I am the bad guy who adds cigarettes and Bombay Sapphire to it.”

I playfully told Bryan that I was disappointed that there weren’t any diva-esque requests on their rider. He laughed hard for a while and said: “Can you imagine? You always hear the stories about people asking for ‘just red skittles’ or some shit on their rider but we don’t do that. We just get essentials, stuff that we can eat at the venue and take on the bus with us. Honestly there is nothing exciting. We started to bring a Nintendo 64 with us on the road and we need Mario Cart.”

He added: “Our rider tends to change a lot though. A funny story, we had a show once where we just asked for plain white t-shirts, underwear and socks. It was very practical and relatively simple. It really isn’t too interesting; I hope I am not boring you too much?”

The truth is, bored was the last emotion I was feeling. Bryan was incredibly articulate, softly-spoken and had an undeniable disarming charm, regardless of how sad this may sound, but I was pretty much hanging on to his every word.

Bryan was also faultlessly polite and magnanimous throughout the interview. At one point he was in a lift and was distracted for a moment mid-answer. He insisted that he go back and answer the question properly which was incredibly considerate on his part and I appreciated it.

His voice lowered considerably and he said: “Well that was so awkward. I’m so sorry, I was in an elevator for a second, I will quickly go back. The people were staring at me as I was talking to you, they were thinking that I’m really weird.”

Bryan revealed that the band have a ritual before they go on stage. He said: “We all change in the dressing room beforehand. We always play a song to get us going, like Drake’s ‘Worst Behaviour’. It is kind of a thing where we play a song, the lights go off, you hear people go crazy and that is when we get pumped up backstage.”

The subject of Bryan’s penchant for being involved in all sorts of debauchery presented itself and I asked whether there was any truth to the rumours. He pondered: “I like to keep it classy, I never get sloppy. Some of the guys in the band don’t drink which is a personal choice that I completely respect.”

He added: “To tell you the truth, we’re not even necessarily big partiers. I suppose if anybody was going to classify it, it would probably be me but I still keep it pretty tame. The guys in the band have this joke; they say that they feel like they’ve never seen me drunk, because when I drink I stay pretty much the same person that I am right now.”

If you search the band’s name on Twitter, there is a seemingly endless feed of young women declaring their love for the band and Bryan in particular. A comment on their new video for ‘Afraid’ read ‘Bryan…I want to curl up inside you’. Another was from a fan who claimed that she had waited hours in the dark behind a recent venue in order to meet him. This is a band with no shortage of female admirers, I precariously asked Bryan what his stance was on groupies.

He broke into peals of laughter, took a deep breath and said: “Well, This is our first ever tour with a bus, so we’re very new to that whole situation.”

He laughed softly and his his voice lowered considerably. He sounded intimate and disarmingly genuine, he said: “I’m all for finding love and I would rather meet someone on the road who doesn’t know about my band or maybe does but doesn’t know much. Girls that go to shows with that whole ‘groupie’ thing in mind, that whole thing makes me feel really uneasy.”

He elaborated: “In general, an important part of intimacy and love is the process you know, you like somebody and you talk to them, take them on dates and then when you finally get to that point when you can be intimate with each other and that way it means so much more. I don’t know if things will change, maybe one day I’ll change my mind about that, but for now that’s where we’re all at.”

After the phenomenal success of their debut album, fans of The Neighbourhood are eager to hear new material from the band. Bryan revealed that the release of their follow-up could be sooner than expected.

He said: “It actually should be sooner rather than later, we’ve been working on the road writing all the time. It’s just been the five of us on the road on the computer and we’ve just finished like a whole new project. We have it, it’s just a matter of when.”

Fans can expect The Neighbourhood’s signature inexplicable but completely captivating style, but Bryan assured me that the band have experienced a lot of growth personally and musically.

At that precise moment, I heard a familiar beep and my heart sank as I realised that my phone battery was running dangerously low. We had been speaking longer than I had anticipated, so with a heavy heart I had to draw the interview to a close.

Bryan and I said our farewells, but not before he told me to keep in touch and drop him a line via Twitter. With that he was gone, leaving me with the distinct feeling that he was not a hell raiser whatsoever, but in fact an incredibly charming and loveable rogue. It is not easy to interview someone when you hold them in such high esteem and are great fans of their work, luckily for me Bryan exceeded all of my expectations.