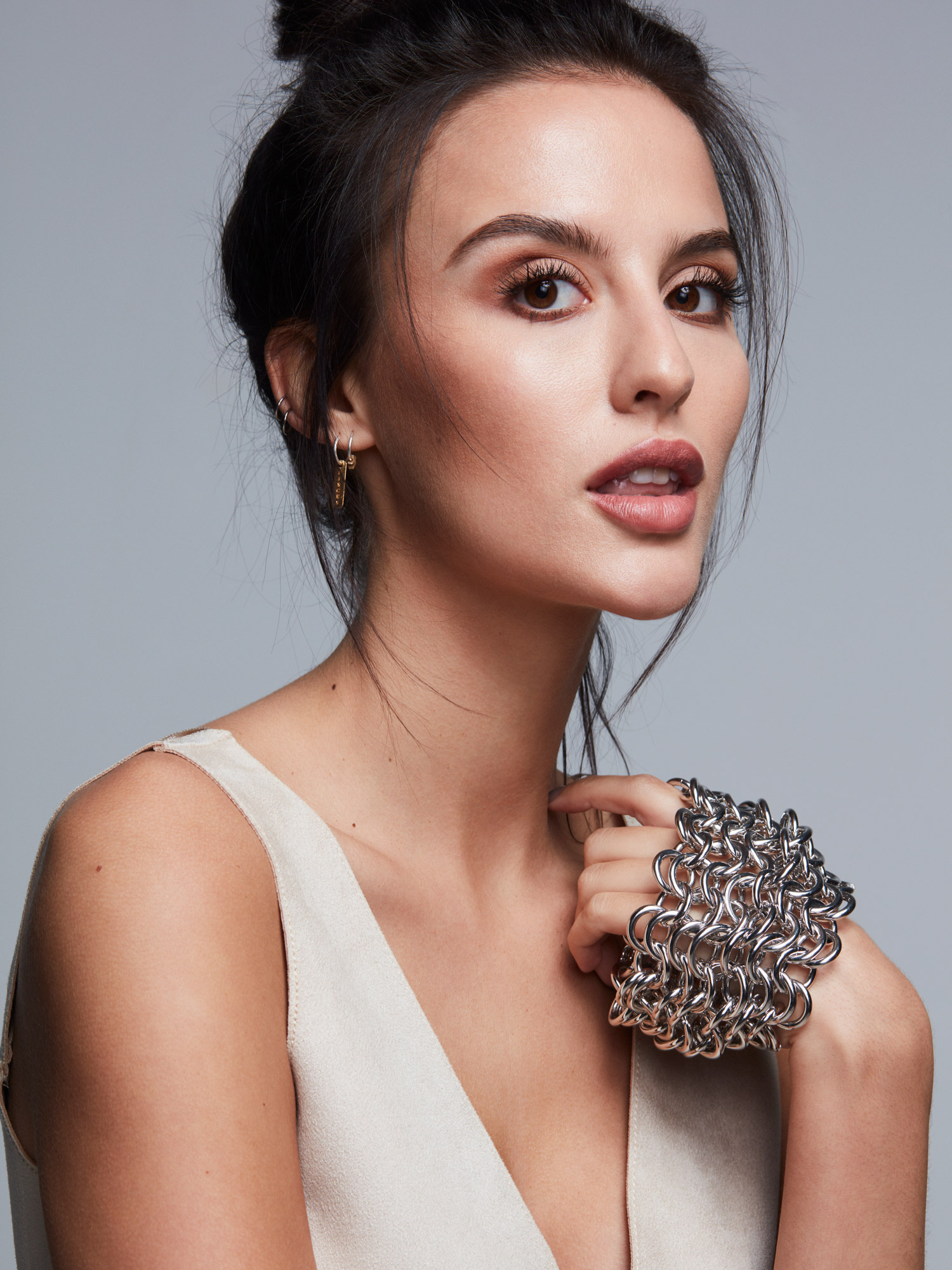 TV may have made Lucy Watson a household name but her true passion lies far away from the small screen. She has dedicated her life to campaigning for animal rights and veganism. She has turned down lucrative opportunities worth hundreds of thousands of pounds because of her beliefs but this doesn’t make her bat an eyelid. Lucy Watson is a woman on a mission.

As soon as we sit down, Lucy opens up about how her childhood growing up on a farm instigated her decision to pursue a vegan diet. She says, “I grew up on a farm in Surrey and saw a lot of the behind the scenes. I became vegetarian from there.”

She continues, “It was as soon as I realised that the food I was eating was once alive. As a child, I loved animals and was always in the fields playing with the sheep, cows, ducks and chickens. These incredible animals are killed, so that we can eat them for dinner. Their lives are over, just for us.

“It physically made me feel sick to think about eating them. It was like eating my dog.  I have never differentiated or saw a difference between dogs, cats, pigs or cows. I don’t understand how people can suggest that the two are different things. All animals are living creatures, they have feelings, and they all deserve to live.”

Lucy’s decision to go vegan was cemented after watching a documentary called ‘Cowspiracy’. It highlights how cruel the egg and dairy industries are.

She shakes her head solemnly and says, “The whole point of me being vegetarian was because I love animals and I want them to be out of harm’s way. When I found out these industries were cruel, I just decided I couldn’t be a part of it, and since then, I have been vegan.”

We discuss a recent tweet about not just wanting to protect the ‘cute’ animals, she responds: “I think all animals are cute, even a turkey, I don’t ever think of them as ugly. Animals don’t ever wish to harm people; they don’t have bad bones in their bodies.

“I see them as pure creatures. People’s perceptions are down to marketing, routine and tradition. If we started all over again, it would be different, and if it weren’t the norm to eat meat, people wouldn’t do it. Seeing animals being tortured or in pain and when you hear the screams, you see the fear in their eyes. It is not a thing you can just be ok with; I don’t think many people would be.” 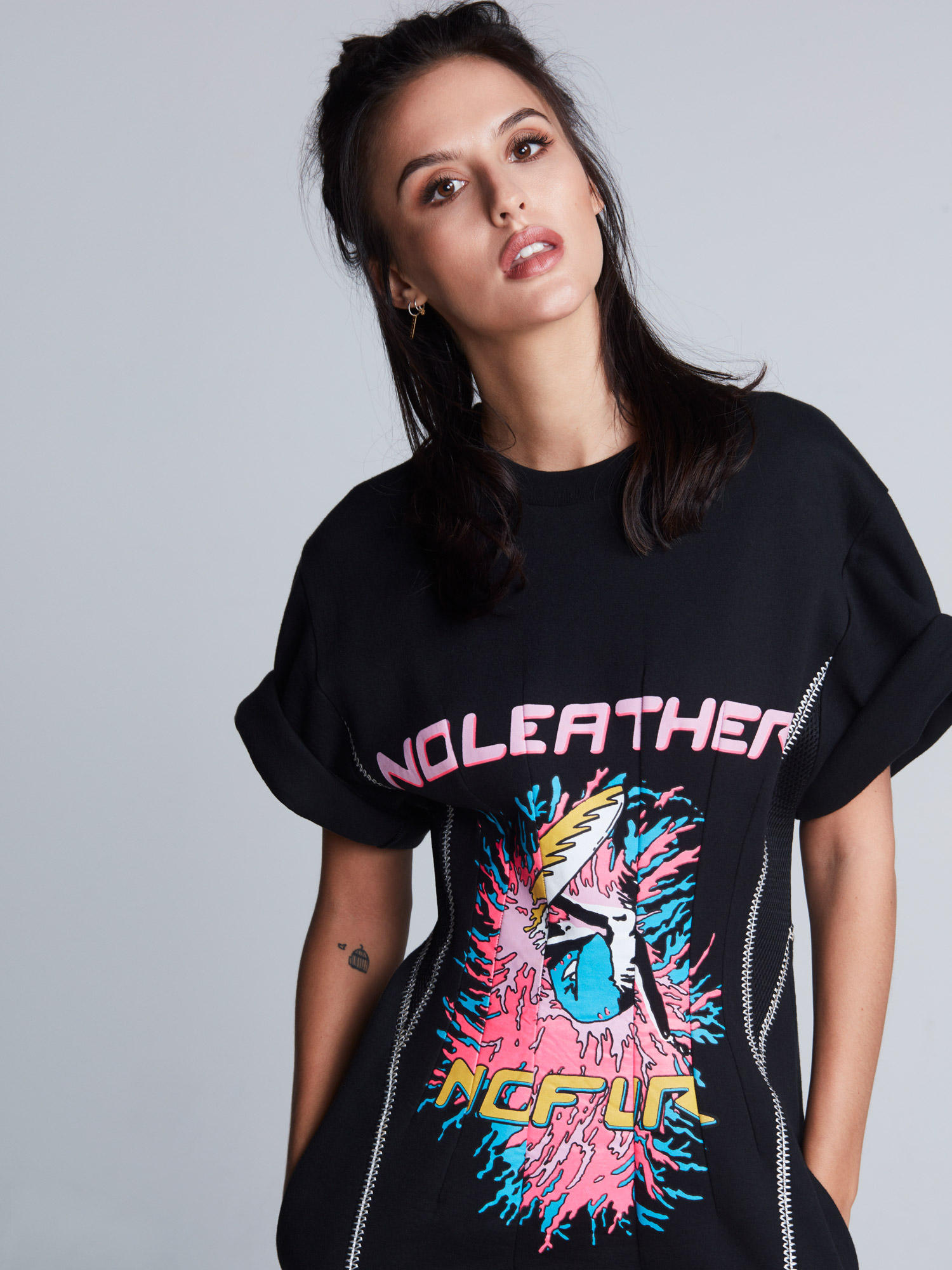 Lucy has been a PETA ambassador since 2014 and has since fronted several campaigns, including their provocative anti-fur campaigns.

Speaking of the partnership, Lucy revealed: “I approached PETA, I’m a fan of everything they do. I’m not sure I was on their radar, but as soon as I had a platform, I knew I wanted to do something good with it. I thought why not approach them and see if they wanted to do a campaign.”

Lucy’s affluent background was welcomed with open arms at PETA, she explains, “They were happy that someone associated with those luxuries was really against it. We’ve had a great relationship moving forward; they were a part of my vegan journey and educated me on so many things.”

Lucy has always aspired to use her voice to educate others on animal rights, regularly posting to her 1.4m Instagram followers and grateful to do so.

She explains: “Made in Chelsea gave me this crazy platform of people looking at what I do and what I say. It’s like I have some power here, to influence people and help them understand things about saving animals. I think for me, that was the best thing ever.

“Some of the messages I get are shallow and talk about the way I look. However, I also get so many messages from people telling me ‘I am so thankful to you for teaching me about this, I’m now vegan, or I’m now vegetarian, or I don’t wear fur anymore’. That just makes me happy, it makes everything so worth it.”

As an influencer, particularly in an age where social media plays a large part in people’s success, it was important to uncover whether Lucy has had difficulties battling with choosing a paycheck or a clear conscience when working with high-profile brands.

She admits: “That has been one of the most difficult challenges. I have changed over the years. So maybe initially when I was vegetarian, I didn’t understand how many industries involved animal cruelty, for example, cosmetics test on animals.”

For Lucy, veganism is a lifestyle choice, and she is choosing to be a part of anything that is cruel to animals. She states: “Veganism isn’t just a diet, it’s everything that you wear, makeup has animal products in it as well. I have had to say no to hundreds of thousands of pounds worth of jobs, just because I don’t agree with the ethics.

“It’s a full-time commitment, and it is something you put first before money, before anything. I do feel like it is worth it to me because I don’t think there is anything genuine about someone who preaches about things and then will work with a brand that tests on animals or has animal products.”

Lucy attributes her current style to her favourite cruelty-free clothing brands. She gushes: “Stella McCartney is one of my favourite brands. Most other designers use leather. I had to get rid of all my designer stuff, and I can’t shop in those places anymore which is quite annoying, but it saves money.”

Lucy’s vegan lifestyle has inspired many others, which has led to her debut cookbook, Feed Me Vegan. She explains: “My followers would ask, ‘what do you eat?’. They want to do it, but they don’t know how they can still eat nice meals.”

She continues, “People think that veganism is about just eating salads. That was something I struggled with when I first went vegan. I thought to myself, ‘I can’t do it, I can’t eat salads every day. I will starve’.  It is a hard journey. You have to change everything, what you buy for your fridge, the way you cook. My book is like a help book in a way because it has everything that you can eat – all vegan, all amazing and delicious and this is how you make it. You have no excuse now.” 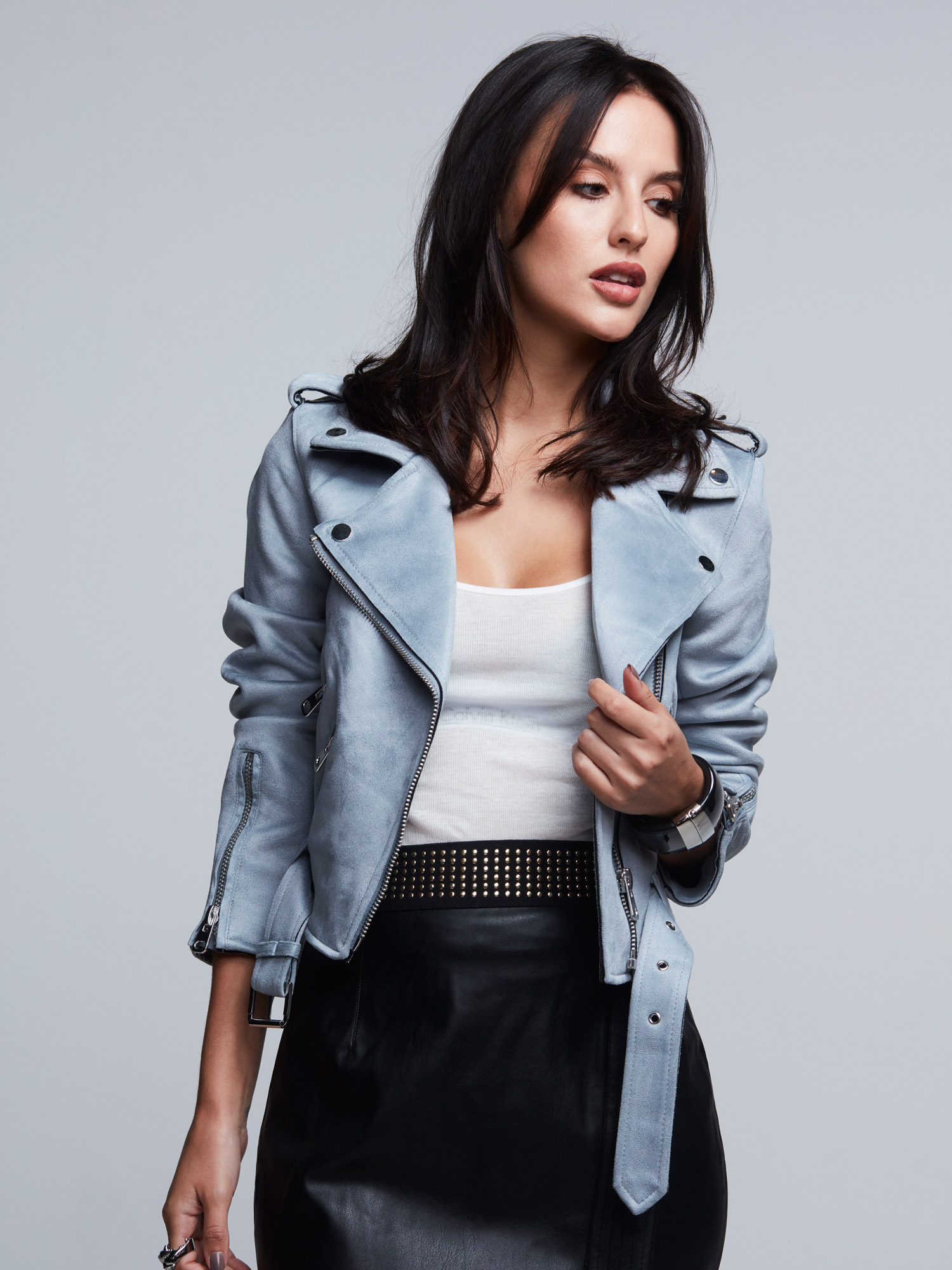 Lucy has mastered how to satisfy her followers. The cookbook takes classic recipes that typically require a lot of animal products and puts a tasty vegan spin on them.

She goes into a moment of deep thought when asked what her favourite recipe from the cookbook is:

When asked what her favourite recipe from her cookbook is, she replies: “The amazing burgers made out of lentils and chickpeas. Spaghetti bolognese as well, which people think you can’t make vegan, but you can. It’s very easy and takes the exact amount of time. My boyfriend eats it, and he isn’t vegan, and even he thinks it tastes the same. I have spaghetti carbonara, mac n’ cheese, everything. It’s all good food, and it all tastes so good.

Lucy has discovered that vegan cooking isn’t as daunting as you might believe.

She states: “You can be so much more inventive with vegan food. You begin to see things in a different light, as you begin to cook and experiment. Knowing that you’re eating something that is delicious but with a guilt-free conscience. The majority of the vegan recipes are good for you as you are eliminating things like dairy, so you’re eating meals with low saturated fat.”

Lucy explains that you can lead a fit lifestyle, building and maintaining muscle, while still being vegan: “I watched a documentary recently called ‘What The Health’. These scientists and doctors say ‘I don’t understand why people are obsessed with protein?’ and ‘how did this happen?’.

“The fitness industry is all marketing protein. People say, ‘you can only get protein from meat’. But what do cows eat? Cows eat grass, so their protein is fuelled by plants. It’s narrow-minded and naive for people to say you can’t have muscles and be fit on a vegan diet. I know so many bodybuilders who are vegan, and they look insane. Anything is possible.

“The fitness industry has realised veganism is a growing area and they can’t ignore it. It’s exciting, and I think it is just going to continue to grow faster and faster.” 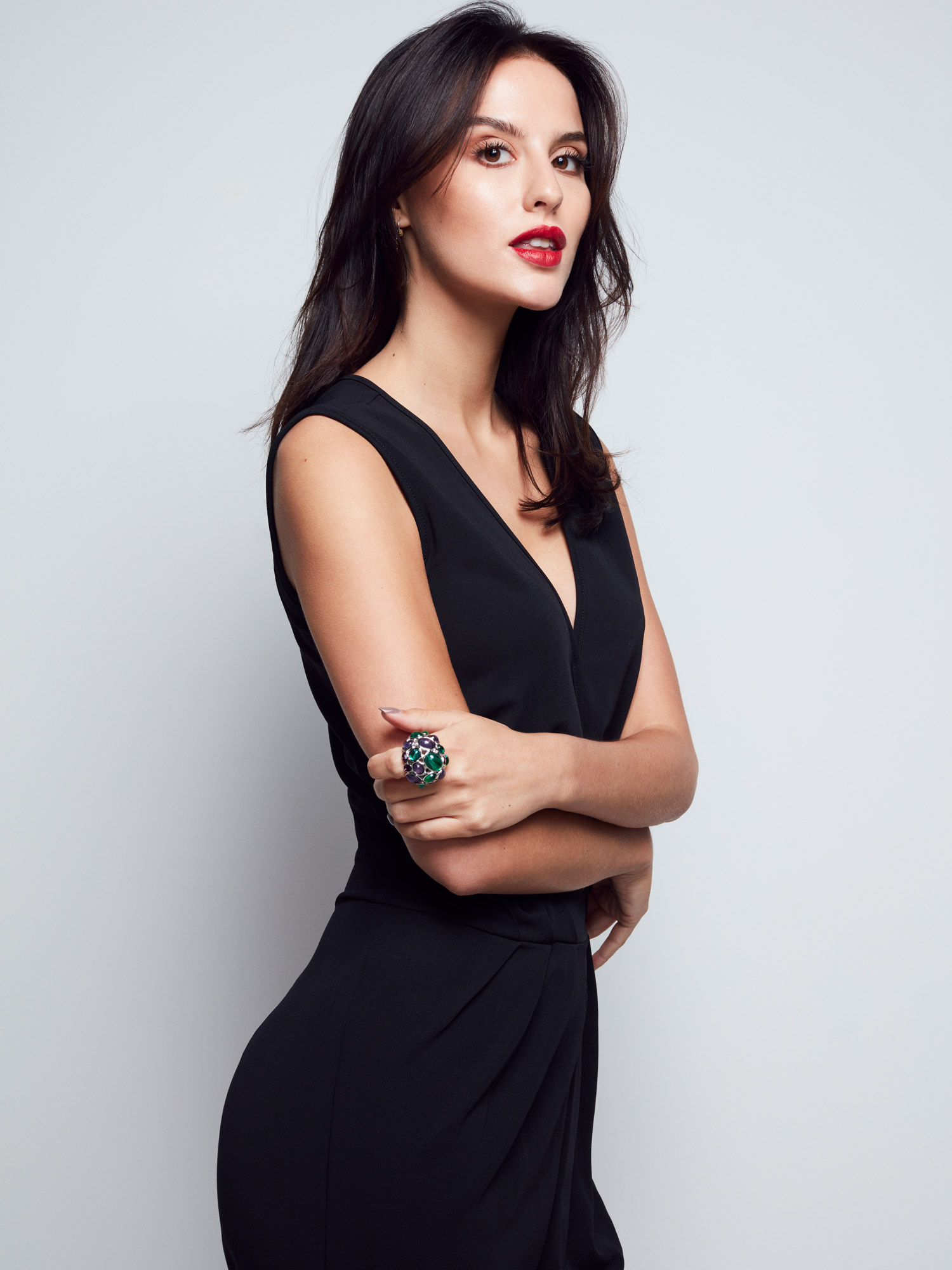 In 2016, Google Trends saw a 90% increase in ‘vegan’ searches and research commissioned by The Vegan Society shows at least 542,000 people in the UK are now following a vegan diet. This is evident in all the vegan-friendly restaurants popping up all over the UK.

Lucy exclaims excitedly: “Restaurants are realising that this minority is growing. Millions of people are now vegetarian and vegan, so if they are not catering to that, then they are missing out on a huge market.”

Lucy has also noticed the growing trend while abroad, she says: “I just got back from Barcelona. I was apprehensive because Spain is up there for being one of the least vegan-friendly countries, but they were accommodating and said, ‘oh yes vegan, we have this, this and this.’”

Lucy is at the forefront of a new wave generation, seeking more than just quick-fix diets and fads; they are looking for a complete lifestyle overhaul. She elaborates excitedly about how her followers have responded to her activism: “It has been crazy. My whole diet and lifestyle have completely evolved over the last five years, and so many people are interested in it.

“It is also becoming cooler, it’s like a trend. It’s weird, but it’s exciting, and it’s definitely a good thing.”

Feed Me Vegan is available on Amazon, click here to buy a copy.