39,000 feet up in the air, dusk slowly crept up as the sun began to set on the burning horizon. Soon, only the twinkling lights of Casablanca became the main source of illumination, the golden hues that glowed like stars in the sky.

Casablanca, the largest city in Morocco, and the name of one of the most classic 1940s love films of all time, is a truly wonderful place. But unlike Rick Blaine, my adventure isn’t set in an upscale nightclub and gambling den in Casablanca. Rather, my love affair begins in an enchanting town named El Jadida, and in an even more charming place called Mazagan Beach & Golf Resort.

Located an hour away South of the city, into the night we drove before we eventually descended upon the gates into the complex. Perfectly manicured trees led the way up to the main hotel, the pathway dimly lit, providing no hint as to what lay ahead. As I leapt out of the car, I was completely blown away by the majestic and monumental palace that stood before me. 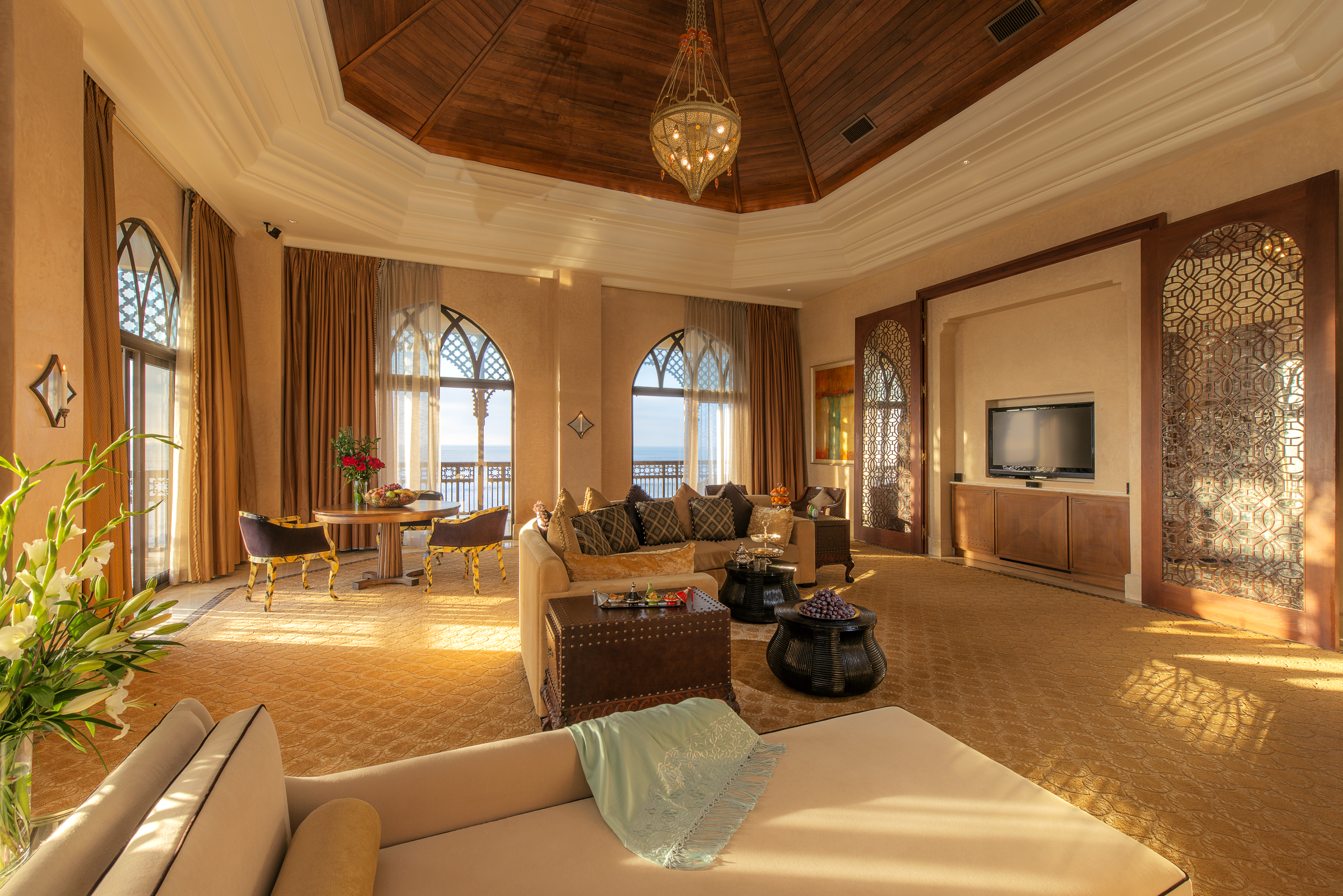 I journeyed through the riad (also known as a courtyard), which held an undeniable resemblance to the Alhambra Palace in Granada. As a graduate in Art History, with focus in the region of the Middle East, I was completely in awe and within my element, studying the intricate designs of the carved wooden ceiling above me, inspecting the marble floors and gawking at the colossal pillars that flanked the waterway in the centre. Having been blown away by the façade, I was even more eager to see what else the hotel had to offer.

Upon entering my room in the dark of the night, I peered through my window and could see nothing but eternal darkness, hearing only the crashing waves. With heavy eyelids, I dragged myself to the bed and sunk in, dreaming of the adventures I had yet to encounter. As I woke the next morning and drew back the curtains, I was greeted with a dazzling view of the crystal blue ocean, revived and ready to tour the colossal grounds. 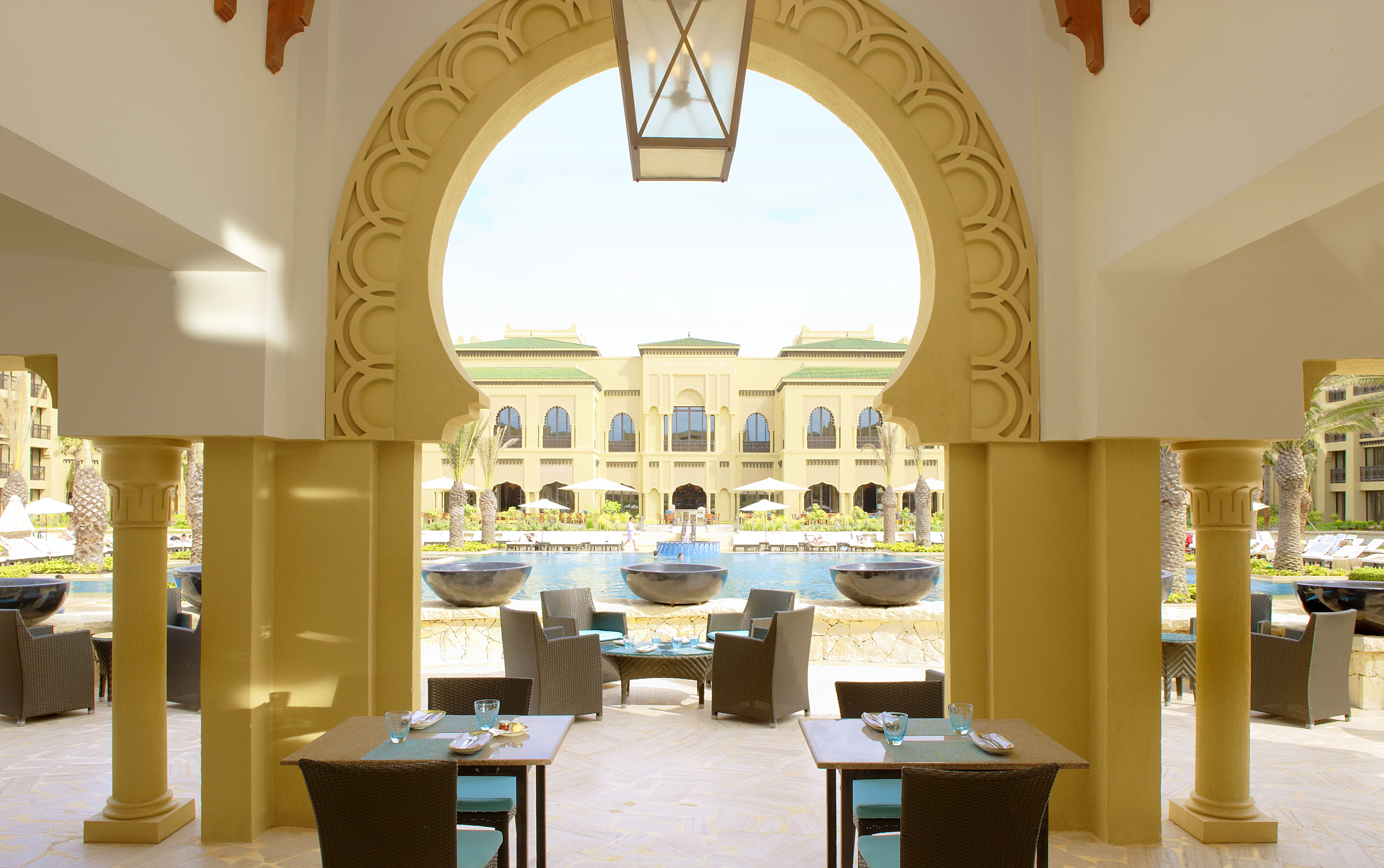 Located in between the two ancient cities of El Jadida and Azzemour, Mazagan encompasses a 250-hectare site bordering on a 7km stretch of white sandy beach off the coast of the azure coloured Atlantic Ocean. As I strolled through the Eden that was the sweet scented grounds, I noticed the ocre walls of the hotel, juxtaposed against the green tiled roofs originally made in Fez, are reminiscent authentic Moroccan architecture. The Arabic-Moorish inspiration continues within the hotel, prevalent through its interiors and colourful “Zellij’s” that embellish the walls, otherwise known as mosaic tile work made from individually chiselled geometric tiles; a form of Islamic art is one of the main components of Berber and Moroccan architecture.

The hotel itself boasts a vast range of amenities including the largest casino in North Africa, 67 private villas for residents and an 18-hole Golf Course. The resort’s crowing glory belongs to the immense swimming pool located at the centre of the courtyard, lined with palm trees and day beds to soak up the glorious African Sun. Mazagan prides itself on being self-sufficient, even having its own farm completed with a menagerie of beautiful creatures, from magnificent Peacocks to baby lambs. 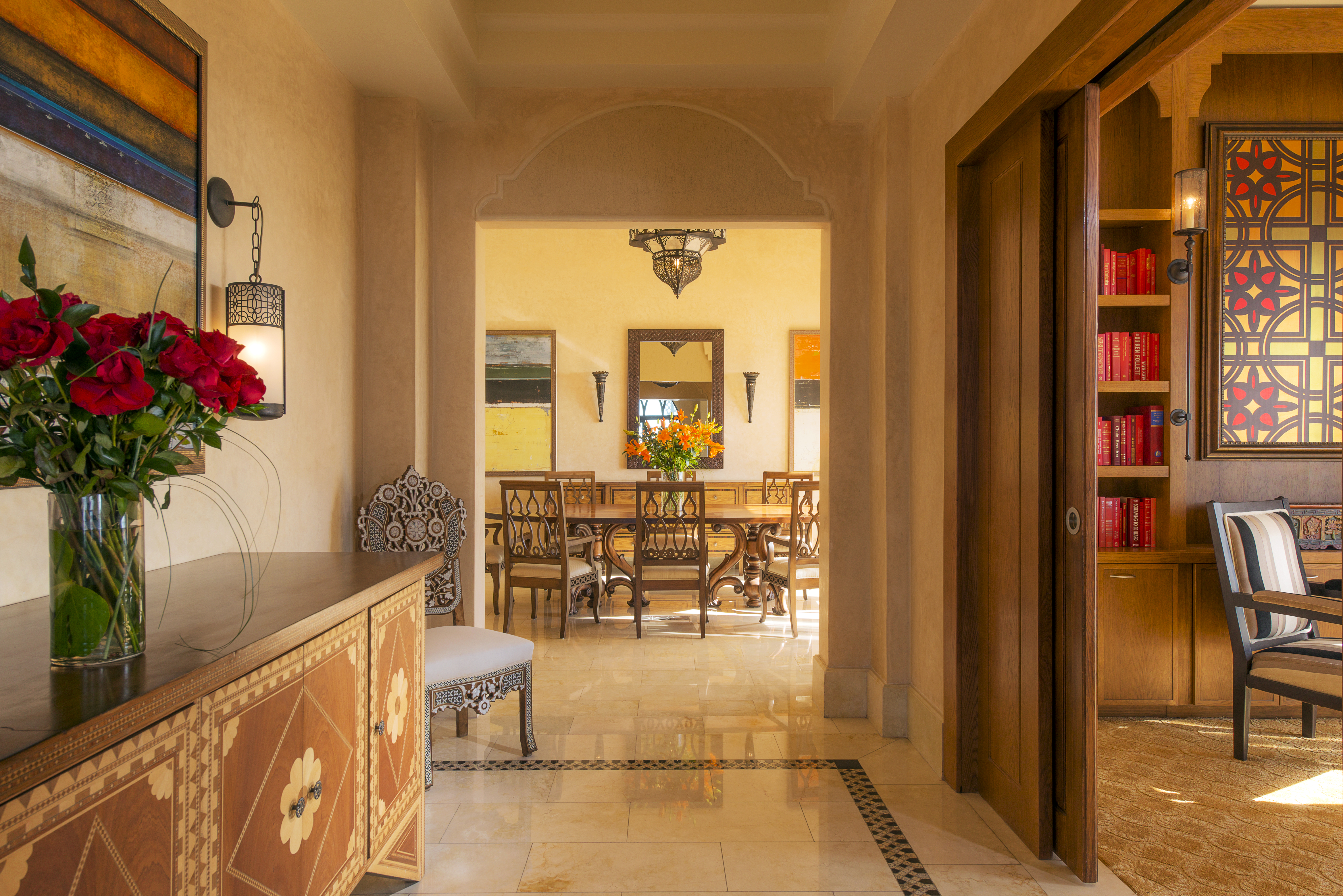 For the more adventurous, quad-biking and horseback riding along the beach is also available, the latter being an activity I was initially apprehensive about, but grew to embrace and enjoy the thrilling sensation of freedom as my noble steed, the black beauty that was named Seven, galloped majestically across the shore.

For those wanting to escape from the hustle and bustle of City life, Mazagan’s idyllic Spa is quite simply the perfect sanctuary. Offering unparalleled views of the ocean, the Spa is finished with 19 treatment rooms, and uses essential oils that are imbued with exotic aromas and natural ingredients, which are locally sourced to engage your senses. From the sweet scent of Mandarin and the floral tones of Jasmine to the serene settings, Mazagan’s Spa is the ideal location to unwind – mind, body and soul. 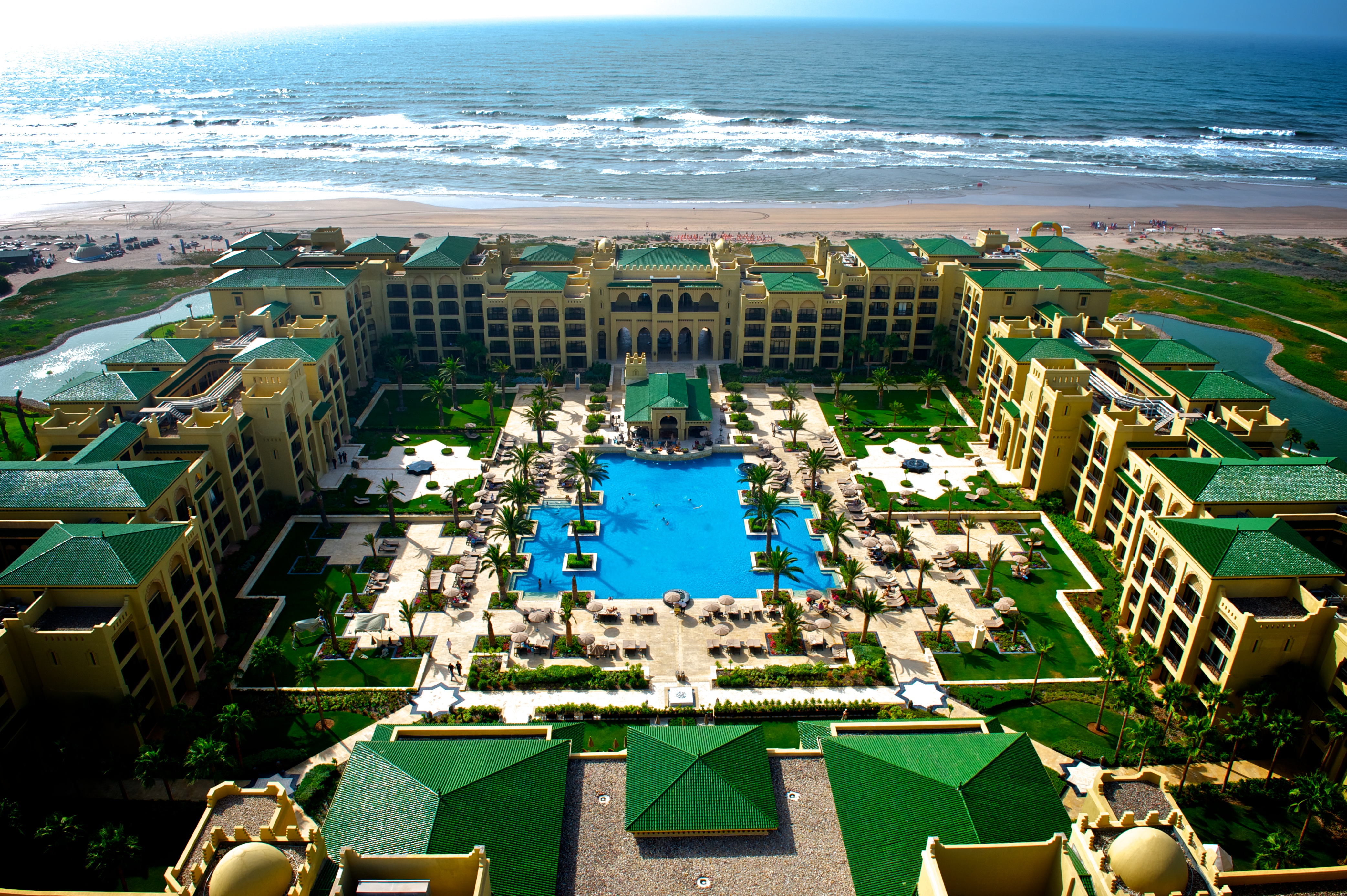 I was curious to learn more about the history and culture of Morocco, and about the land surrounding this magical resort. A stone throw away lays the ancient Portuguese port town of El Jadida, a UNESCO World Heritage site, and a charming town where guests can uncover a traditional and authentic Moroccan city. Enriched with history, this ancient fortified town, which is enclosed by walls and historic buildings that line the winding streets, possesses an air of mystique about it.

During the 1970s, the town was revered as “The Golden Age” and had frequent visitors in the form of Jimi Hendrix, Cat Stevens and Frank Zappa, all of whom saw the prospects this almost forgotten town had to offer. Vibrant doorways and intricate tiles provide bursts of colour against the sandstone buildings. The town hosts many festivals and exciting souks, the latter of which are manned by the most convincing of street vendors who attempt to lure you in with their fresh produce and troves of artefacts. 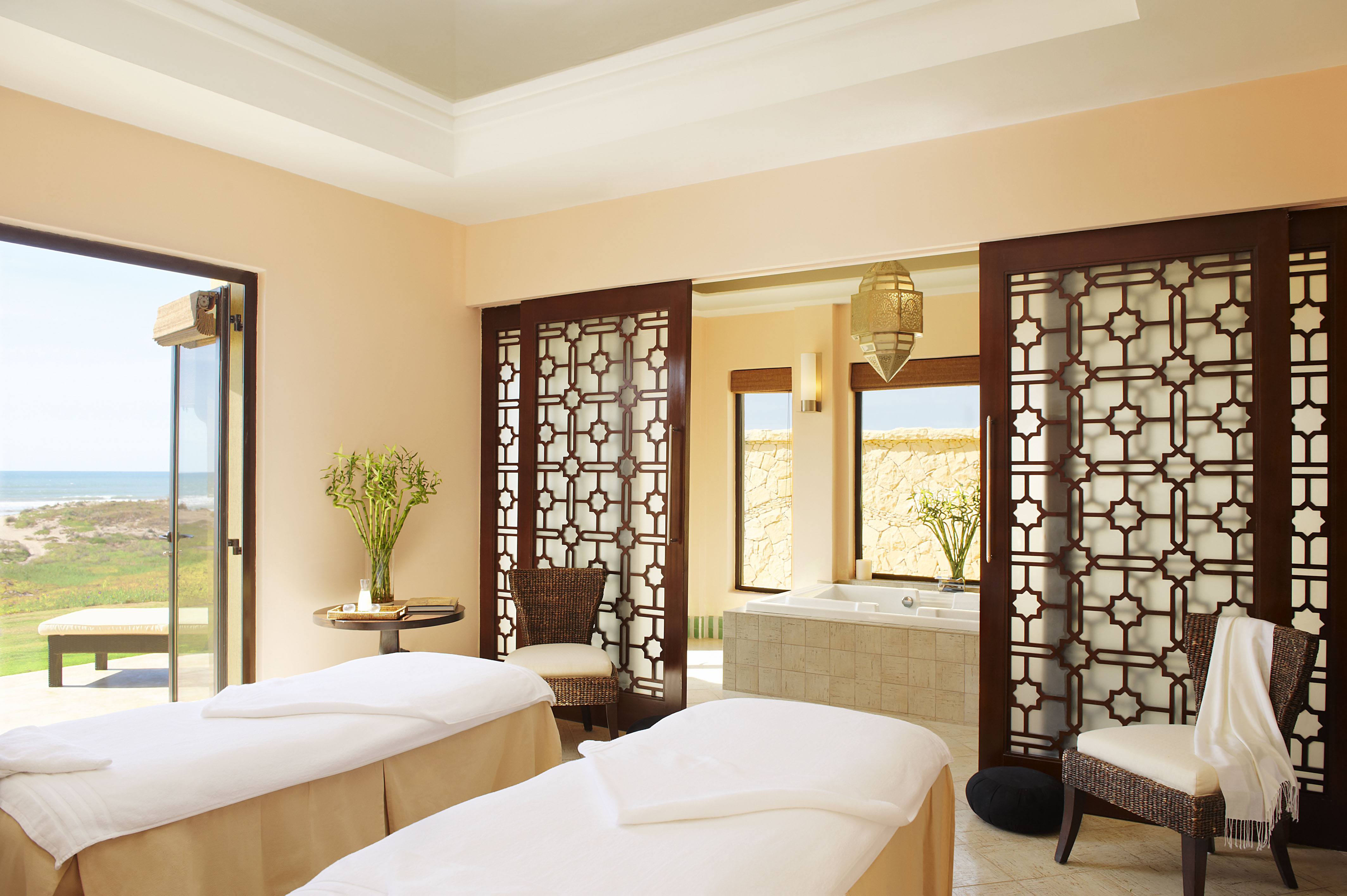 At the heart of the citadel stands the most impressive feature of this little port town; a large arms room that was converted into a water tank to provide water supply in the event of a siege. The Portuguese Cistern is one of the most impressive and interesting sites in the city of El Jadida, both aesthetically and architecturally, and possesses harrowing similarities to the Roman Cistern in Istanbul. This hidden gem, which remained a secret for many years, has become a staple of Gothic architecture, inspiring the likes Orson Wells who filmed a scene of his 1952 adaptation of Othello here.

My excursion to El Jadida left me hungry and intrigued as to what the traditional Moroccan cuisine tasted like. Mazagan of course, provides the same amount of excitement in their adventures as they do in providing a plethora of dining options for guests, ranging from international favourites to the finest Moroccan cuisine. The 14 restaurants can leave one spoilt for choice, but certainly never left hungry. Whether you favour the traditional flavours that pay homage to Moroccan gastronomy including Tagines, Cous Cous and succulent Lamb dishes at Morjana, or would rather opt for the catch of the day at fresh Fish restaurant, Sel de Mer, Mazagan has found a perfect balance between fine and casual dining, all accompanied with the finest Moroccan Wines. 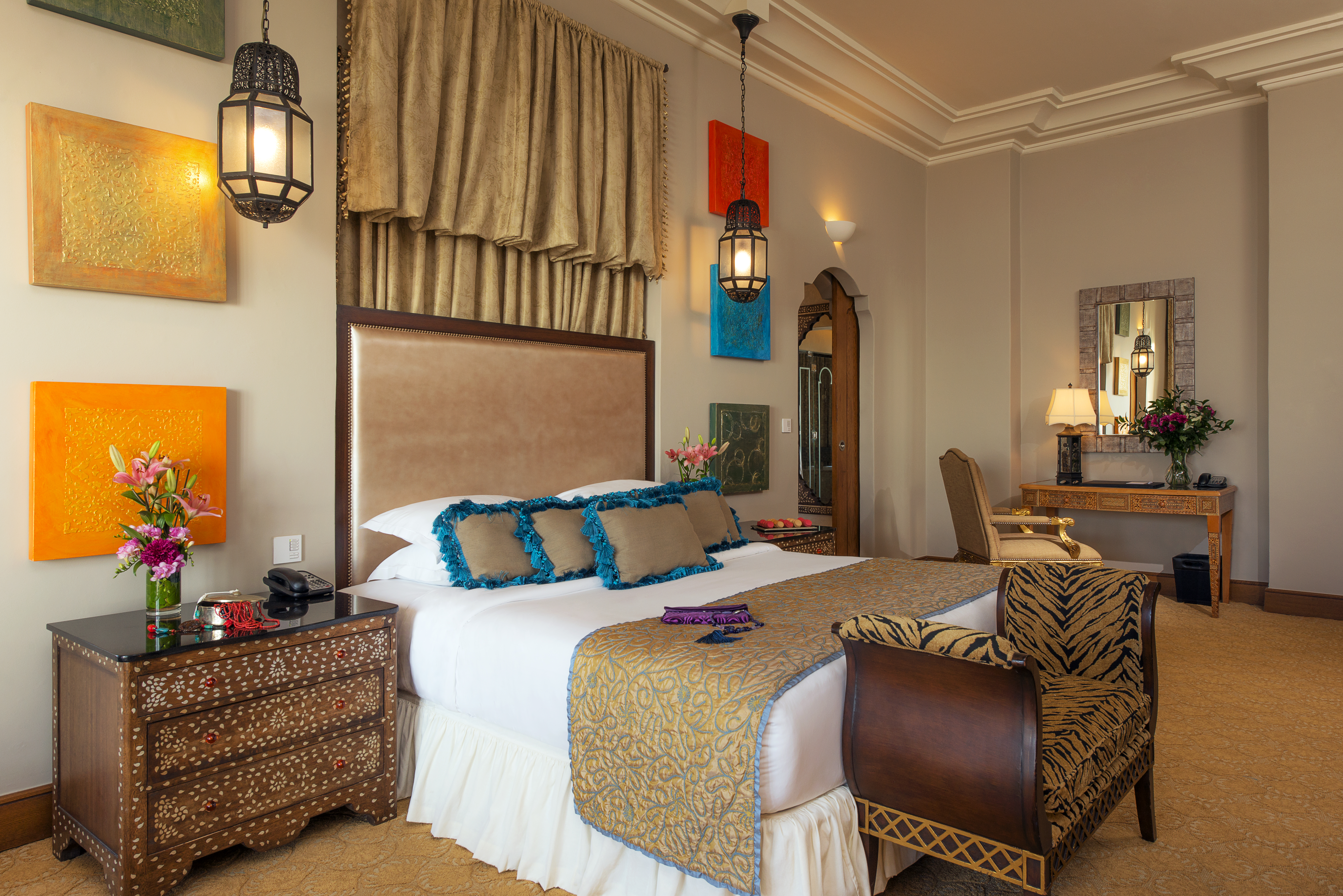 Mazagan has coined itself as the luxury coastal destination of North Africa, offering an opulent experience whilst instinctually remaining true to its cultural heritage and identity. A truly enchanting place, this eternal oasis is an idyllic all-encompassing retreat that marries an authentic Moroccan adventure with supreme relaxation.