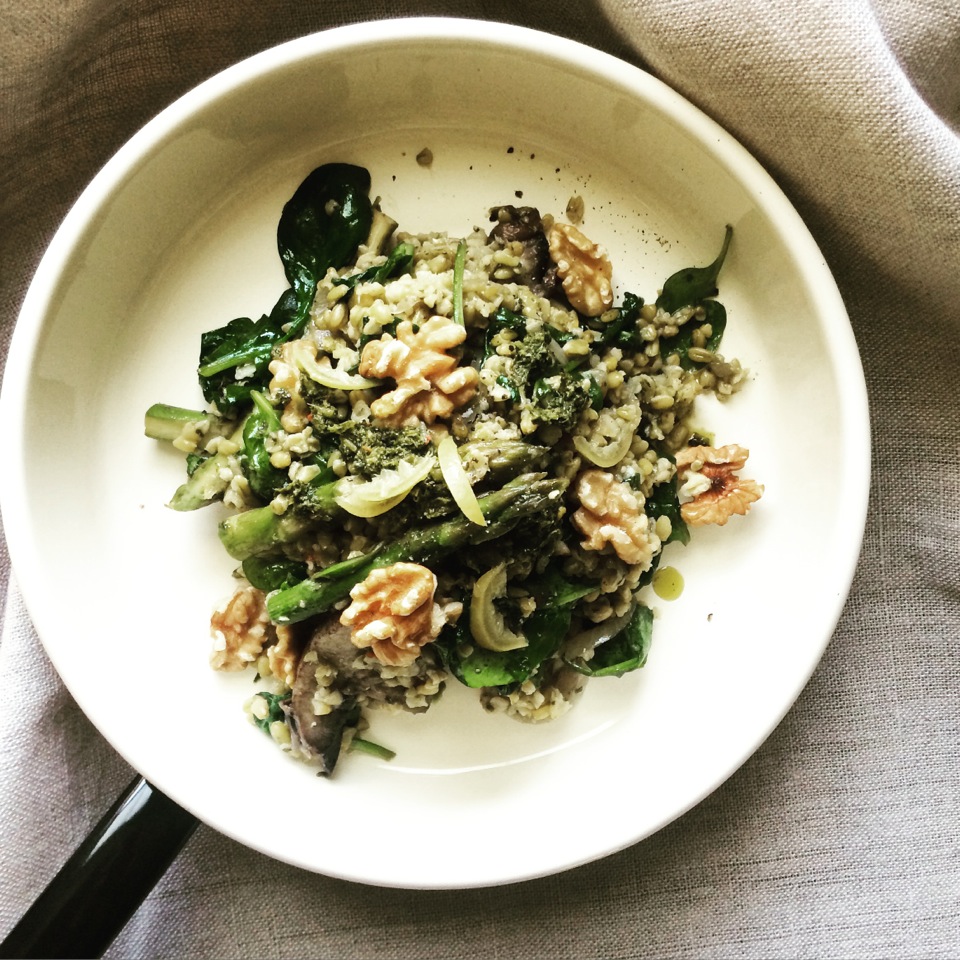 This is one of those dishes that has so much going on you won’t get bored or feel like you’re eating the same old thing (this is no mushroom risotto – vegetarians will know what I’m talking about!) The flavours in this dish are bold, vibrant and light but warm and hearty enough to be a delicious winter warmer.

As much as I’m a huge fan of gravy and all the mash that goes with it, but come winter it’s easy to get stuck in a rut of overeating and missing forgetting your greens and a bit of goodness. The Verbena Harrissa in this dish offers a totally distinct citrus flavour followed by a mellow warmth from the chilli. This combined with the preserved lemons makes for a delicious Middle Eastern inspired dish and a moorish combination.

Freekeh is a great source of protein and fibre so pack in some greens and a few nuts and you’ve got a totally balanced meal. Not to mention you can reheat and take it for lunch the next day.

Bunch of asparagus – Hard ends removed – Cut in half

Begin by adding the freekeh to a large pan, add in your stock and bring to the boil, Once boiling reduce the heat, cover with a lid or foil and allow to simmer for 40-45 minutes.

In a separate pan add a good glug of oil and combine the onion, garlic and seasoning and allow to cook over a low heat for several minutes or until the onion softens and turns translucent. Next add in the mushrooms, asparagus and spinach and cook for 2-3 minutes ensuring that the asparagus still has a crunch and that the mushrooms aren’t overcooked. Remove from the heat and set to one side until the freekeh is ready.

Once the freekeh is cooked through and all or the majority of the stock has been absorbed you can then add in 3-4 large tablespoons of the green harissa, perhaps start with a couple, have a taste and add more if you like a stronger flavour. You can now also add in the onion, asparagus, spinach and mushroom and gently combine. To finish garnish with a handful of walnuts and some finely sliced or diced preserved lemons.

I like to serve this one in a big bowl in the middle of the table where everyone can help themselves. This dish works really well alongside meat but just as well on it’s own.

Her debut cookery book ‘Eat the Week’ launched this summer.