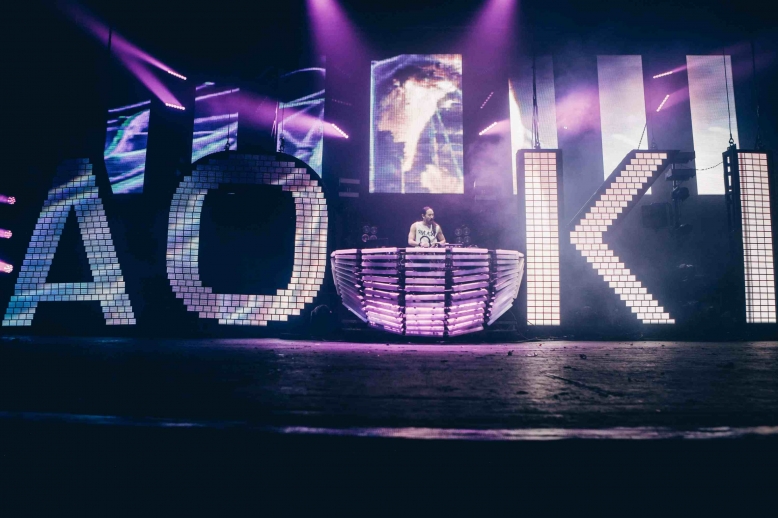 The O2 Academy Brixton has housed some of the latest and greatest artists of all time on its iconic stage. From the likes of R&B legend Lauryn Hill to leading lady of punk Debbie Harry of Blondie, the array of musical genres is endless.

I must confess that one genre I know very little about is electronic house music. However, Steve Aoki completely changed that and I can officially say I have been converted.

On the night of Steve Aoki’s sold-out gig, I approached the O2 Academy Brixton and could already hear the thump of music from the street. I slipped in through the discreet VIP entrance at the side of the venue.

Steve Aoki was not due on for a while, giving the supporting acts plenty of time to warm up the crowd for their Saturday night. Both DJ Marnik and DJ Tony Junior proved to be an more than adequate starter to the main course (and dessert) that was to come.

Then suddenly, flashing lights illuminated the vast room and the night came to a temporary halt. I noticed that my ears were ringing as the lights dimmed and the dramatic thundering voice of Andrea Bocelli boomed from the darkness. In unison, the audience howled along to Bocelli’s “Con Te Partiro”. This was it, the moment we had been waiting for. Midnight had arrived and the party was just beginning. The beat dropped and so did Aoki. 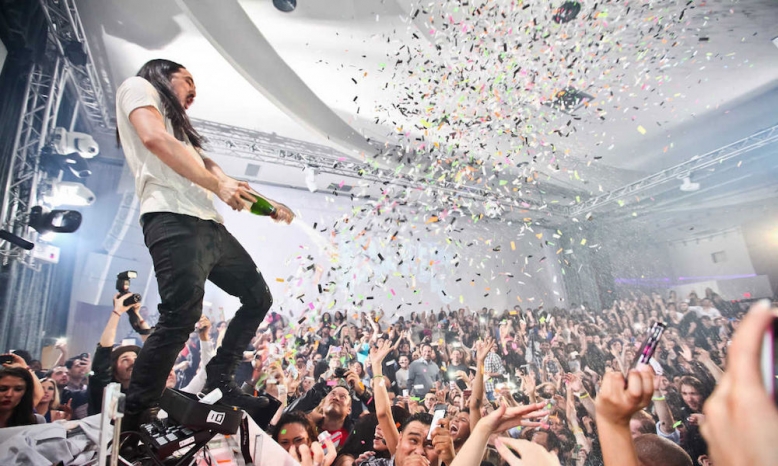 “How you doing London?!” he screamed in his thick Californian accent, the crowd roared in response. Aoki clearly wasn’t happy with this reception, he screamed again, “How you fucking doing London?!” The audience were ready, they bellowed back in response, a sea of hands reached up to the sky. Aoki smiled, his signature long hair waving back and forth.

Though this was my first Steve Aoki concert, I had heard many things about his legendary live performances; I can confirm the cake throwing aspect is very true. Prior to the event I assumed that there would be cupcakes or a few slices but how mistaken I was! A quarter of the way through his performance, Aoki launched four large cream cakes into the audience, not long after handing out two bottles of champagne, and spraying another two into the audience, much to their delight.

Amongst all of the champagne popping and cake throwing, it is Aoki’s ability to fuse popular chart music with future techno elements that is his true charm, allowing the audience to appreciate all facets of his style. Any DJ who can collaborate both Nirvana’s cult classic “Smells like Teen Spirit” and Disney’s opening song from The Lion King into a mix has my full on attention. Playing notable tracks from his Neon Future album, the entire arena vibrated.

Electrifying. Exhilarating. Energising. The layering of each beat ricocheted through my body as the strobe lights beamed all shades of the colour spectrum, incorporating his Japanese background into the typography of the screen behind him. The adrenaline pumped right through my veins, seeing all those around me engrossed in his electronic genius, as if he had everyone under a trance.

2am. The night was still rocking.