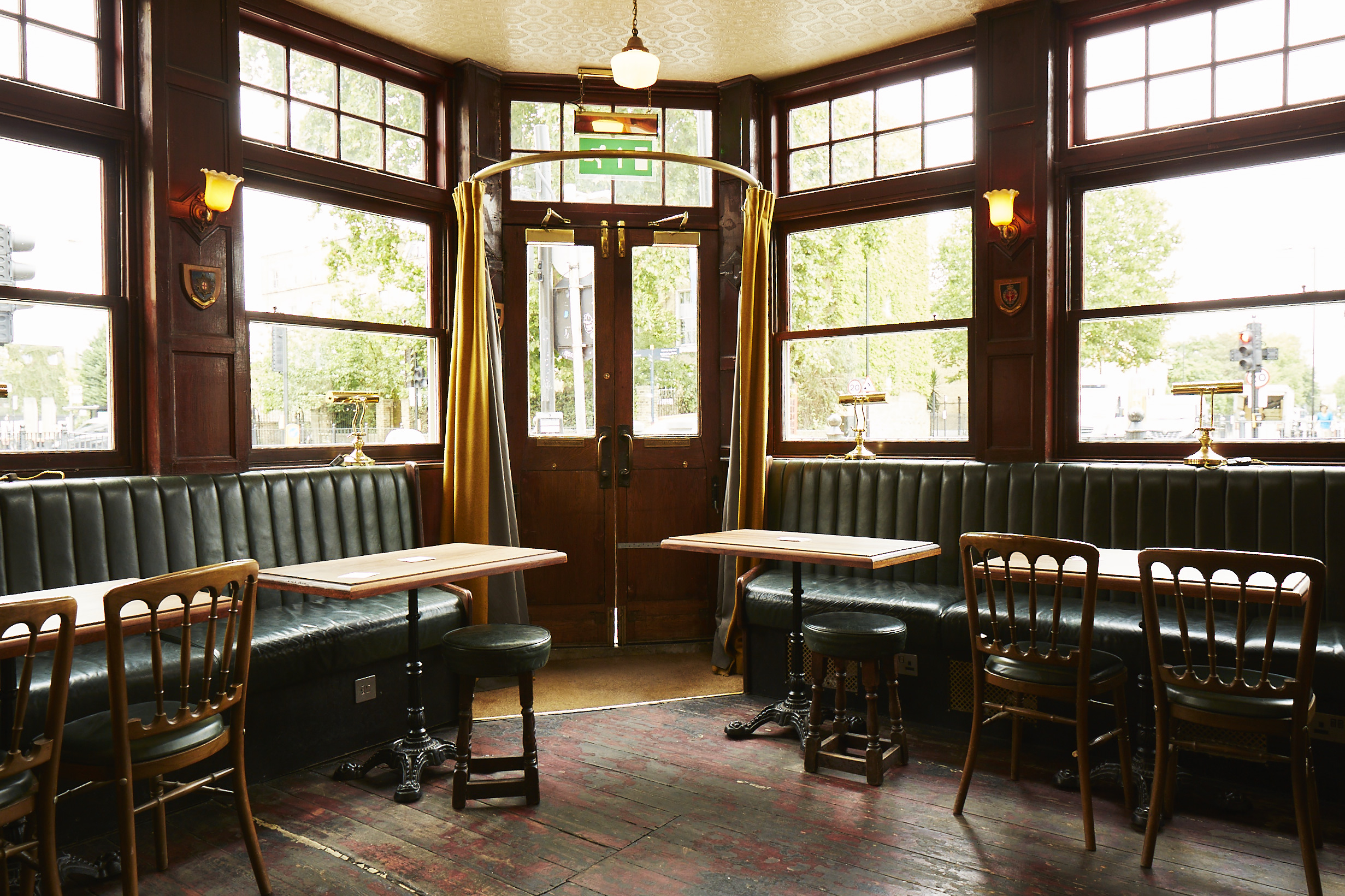 The Marksman has been an East London institution since what feels like pre medieval times. It has fostered the kind of fierce loyalty and love amongst Londoners which you might expect to feel courtside when Andy Murray plays out in SW19. This venue underwent somewhat of a face-lift back in 2015 when it came under the joint ownership of Jon Rotheram and Tom Harris. Jon n’ Tom achieved the impossible by renovating the pub whilst maintaining an unshakeably firm grip on its Hackney roots, much to the delight of its broad band of loyalists.

Stage one was to refresh the pub downstairs, now when you enter you are welcomed by those extremely welcome sounds of measured merriment which emerge from tightly packed groups squeezed happily into bottle green leather seats lining the walls. Inky lacquered floor boards creak contentedly beneath your feet and wood panelled walls surround you. 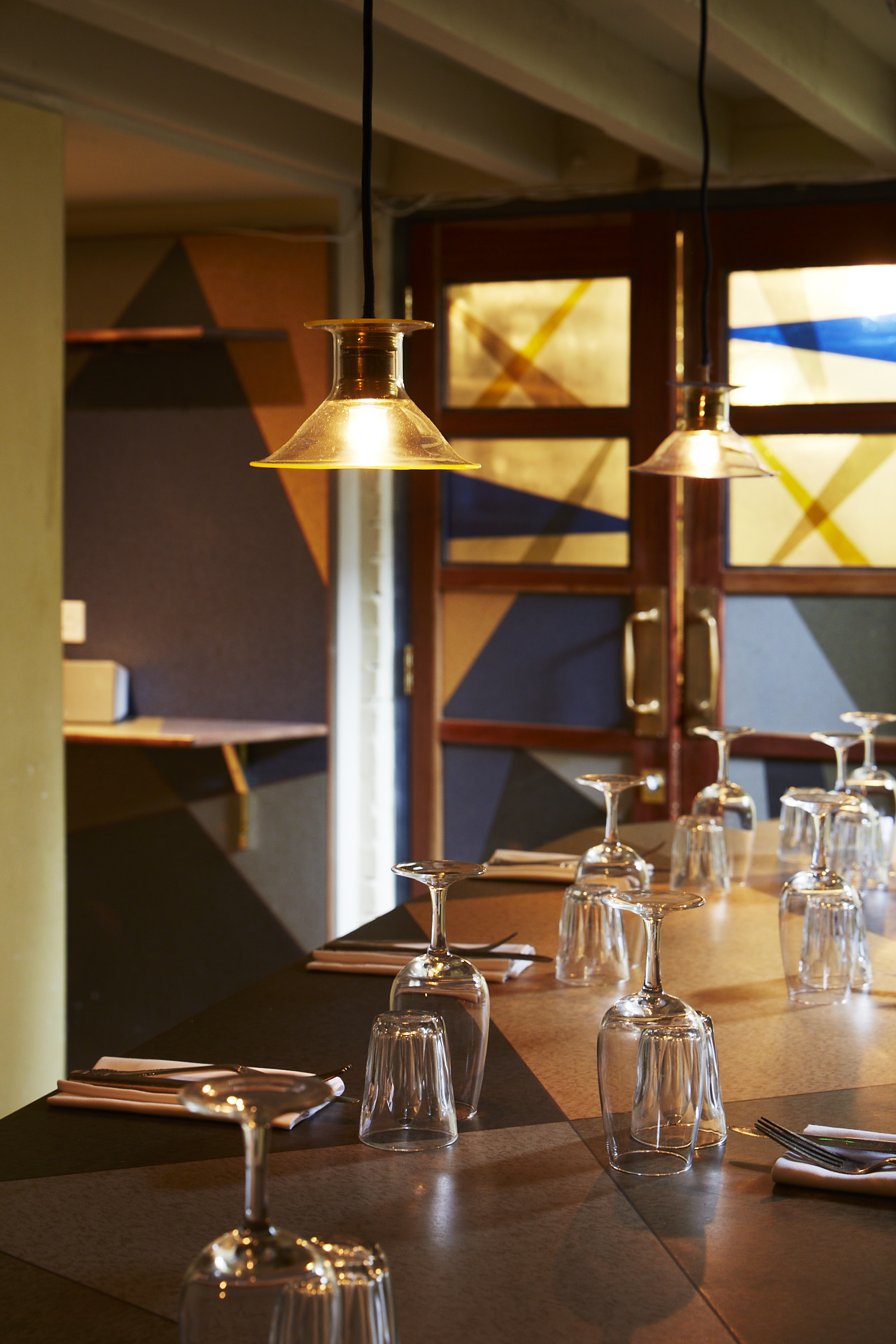 This is truly a homage to what my father would jovially term ‘a bloody good pub’. However, things go up several gears as you mount the stairs and climb up to the Marksman restaurant above.

The restaurant is a kaleidoscope of eclectic patterns and textures, all of which remarkably just ‘work’ when combined. The floor is patterned in a mixture of colours, the dining tables and chairs are a light pine and the walls are a crisp white wash painted masonry. Hanging over each table is a stylish bare bulb suspended from the ceiling above (which is itself patterned in a kind of marbled effect) which represents a nice little nod to Hackey’s newfound identity as hipster heaven. 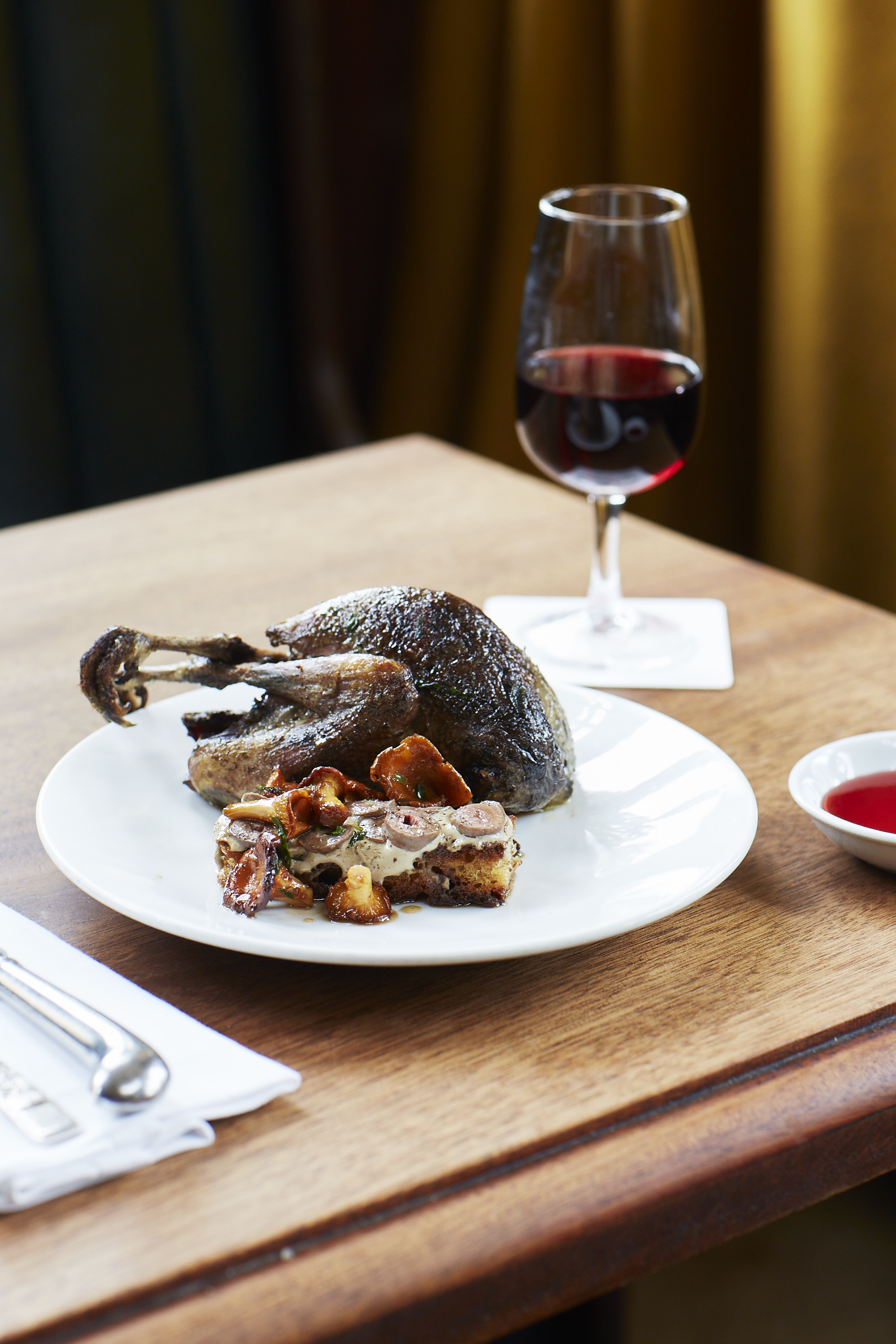 This is a place that just reeks of seriously well considered interior design, it’s chic and contemporary without a hint of pretension or snobbery. Jon and Tom had clearly pondered long and hard on how they wanted the restaurant to feel, and concluded that the right aesthetic was welcoming, comfortable but effortlessly cool.

Martino Gamper, the Merano-born Italian designer was recruited to help achieve this end result – and my, what a team they made. 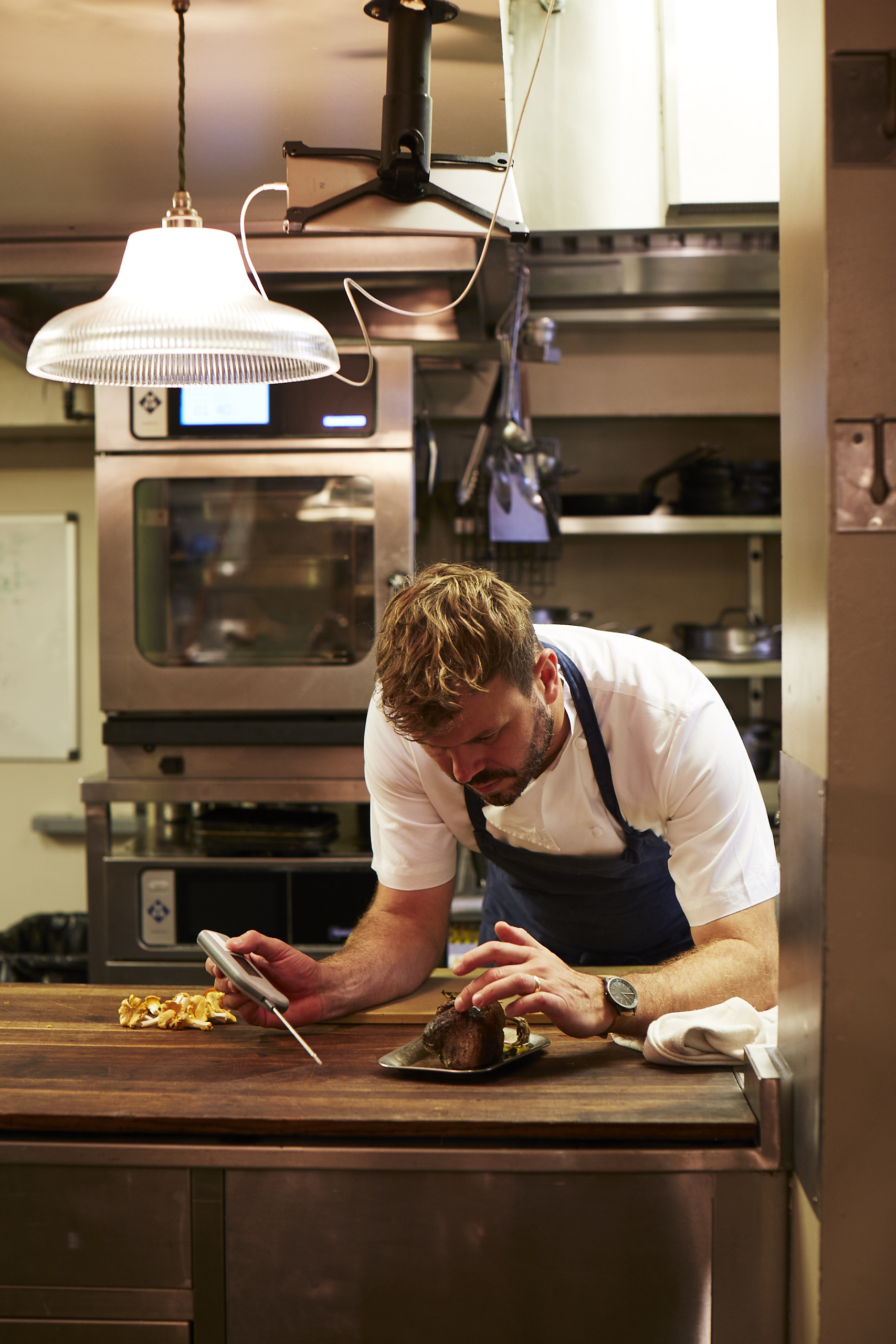 Another character trait of The Marksman which makes it really rather special is the fact that both Tom and Jon man the kitchen themselves. This of course gives them total autonomy to build menus, create a gastronomic narrative and use the suppliers that they deem of sufficient merit, all done their way. What’s more, I gather that Mrs Rotheram and Mrs Harris also can be found on site, getting stuck in themselves. Jon and Tom have chosen to honour British heritage and culinary classics in The Marksman, and work with local suppliers to create an ever-evolving and constantly shifting menu that revolves around super high quality seasonal ingredients sourced from the very best possible local origins.

Even the great English art of bakery has its place in The Marksman as its diners discover when they select items like the much beloved beef and barley buns with horseradish cream, or sharing-sized pies – both of which the restaurant is renowned for. I personally would recommend the chicken, bacon and leek pie, or whichever lovingly handcrafted pie happens to be on the menu when you stop by. It was the final word in incredibly well made and well presented hearty food to nourish down to the very depths of the soul. 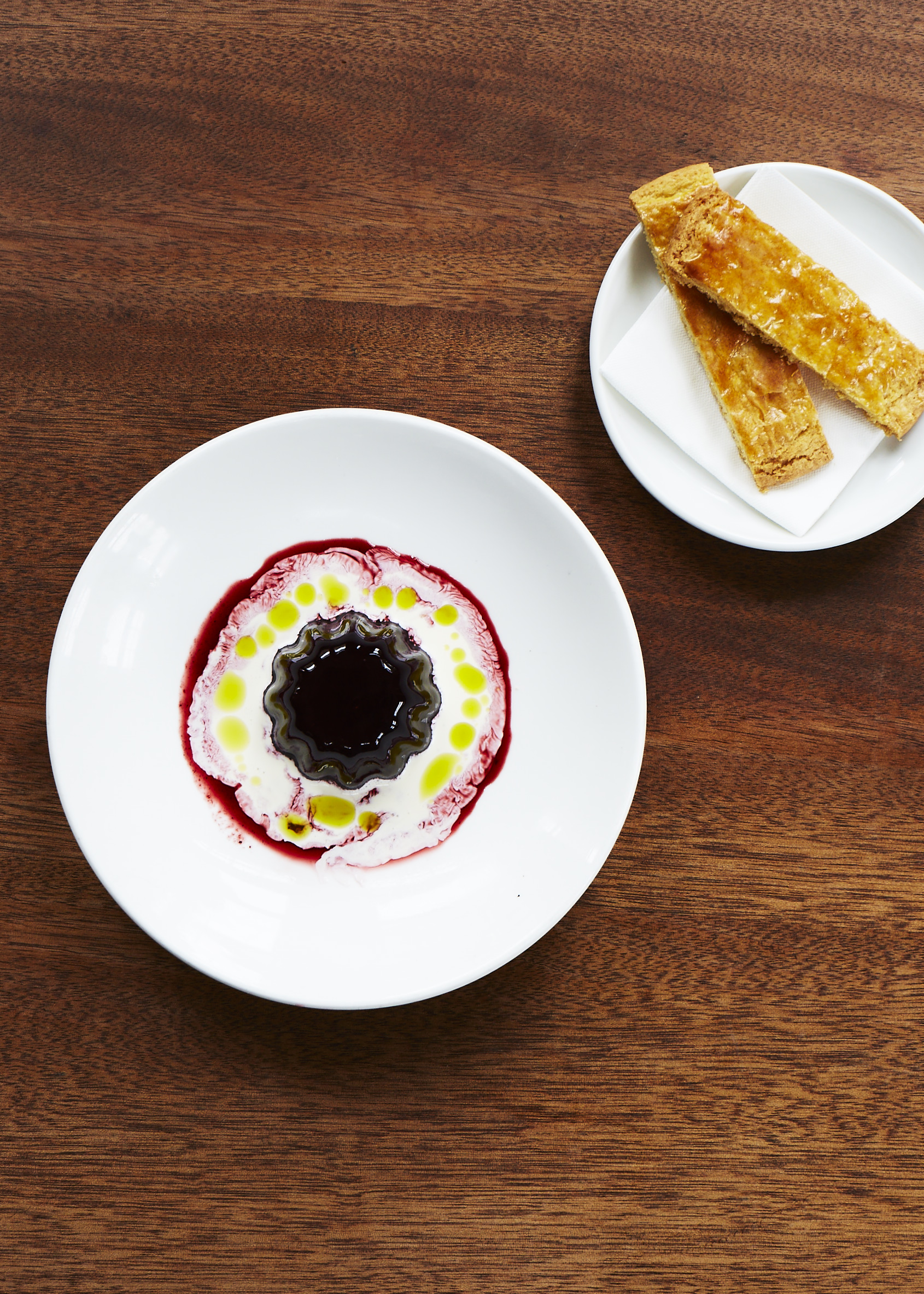 The Marksman boasts two further gems, the first is its terribly attractive little roof terrace. Plants pour from the ledges beneath ornate wrought iron railings, so feel free to slip out for a fresh aperitif before you sit down to dine, or alternative feel free to waddle out for a digestif after having consumed a huge quantity of Jon and Tom’s sublime British-inspired offerings which prove to be frighteningly irresistible even after the chair legs groan beneath you in weary protestation.

There is also ‘The Cellar Room’ a more private dining style affair just metres from the sizzles, bubbles and exclamations of delight which emerge from within the kitchen. Here a group of up to 12 diners can feast on seasonal menus which are present by the chefs themselves. There’s no wonder that The Marksman was awarded the much coveted ‘Best Pub in Britain’ award by the Michelin guide in 2017 – it could not have been more well deserved (though don’t tell my local I said that).